Tonight, Alabama Will Execute a Man Who Didn't Commit Murder

Only 10 jurors sentenced Nathaniel Woods to death for the deaths of three police officers. 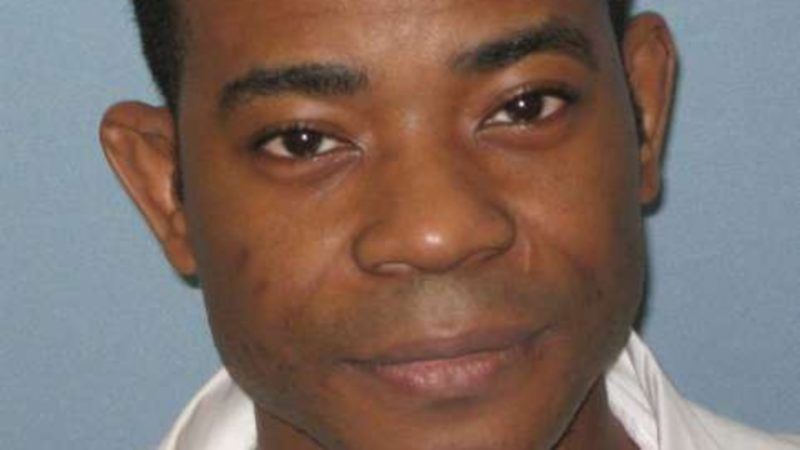 **UPDATE: The temporary stay of execution was lifted hours after it was enacted. The Supreme Court did not provide comment on why it dismissed the motions in Woods' case. Woods' execution resumed on Thursday evening. He was pronounced dead at 9:01 p.m.

UPDATE: In a last-minute order signed by Justice Clarence Thomas, the Supreme Court ordered a temporary stay in Woods' execution "pending further order of the undersigned or of the Court."

Alabama man Nathaniel Woods is scheduled to be executed tonight for three murders prosecutors acknowledge he did not commit. Woods was charged and convicted as an accomplice in the shooting deaths of police officers Charles Bennett, Carlos "Curly" Owen, and Harley Chisholm III at a suspected drug house in Birmingham. Under Alabama law, accomplice to murder is a capital offense punishable by death.

Prosecutors contend that on June 17, 2004, the three officers, as well as Officer Michael Collins, arrived at the house, which they knew to be a place where people bought drugs, and were insulted by Woods. They ran his name through the police database and found he had an outstanding warrant from Fairfield, Alabama. In a letter to Alabama Governor Kay Ivey (R) contesting Woods' commutation request, Alabama Attorney General Steven T. Marshall says that Woods refused to come outside the house, and that officers followed him inside and arrested him on the Fairfield warrant. After they had Wood in handcuffs, however, Kerry Spencer, a friend of Woods who was already inside the house, opened fire on the officers, killing three and wounding Collins.

For his role in the incident, Woods' jury convicted him and voted 10-2 that he be executed.

Spencer, who is also on death row, told The Appeal that Woods is "100 percent innocent. All he did that day was get beat up and he ran." Spencer testified that he was napping after heavy drug use the night before when the police entered the apartment. He said he was roused from his sleep by a commotion, grabbed his rifle, and fatally shot the officers because they were attacking Woods and he feared for their lives.

Woods, Jefferson County prosecutors told the jury at his 2005 trial, hated law enforcement and had lured the officers into the house so Spencer could kill them. Though he did not fire the fatal shots, Woods had masterminded the plan, making his actions as equally significant as Spencer's, argued assistant district attorney Mara Sirles. "He wanted them to be fish in a barrel," she said during her closing argument.

Prosecutors called witnesses who testified they'd heard Woods talking about his disgust for the police. They called a so-called handwriting expert to tell the jury that Woods had written lyrics to a song by rapper Dr. Dre on a piece of paper in his county jail cell that referred to the police as "pigs." They called Collins, who recounted the events that unfolded at the house on the day of the shooting. And they called the victims' widows, who said they wanted Woods to be sentenced to die.

The Appeal found other jarring and alarming discrepancies in Woods' case:

Woods's attorneys have collected evidence that they say shows that neither Woods nor Spencer plotted to kill the officers. The shooting, they argue, had been brought on by years of police misconduct involving a bribery scheme. They've alleged that key witnesses falsely testified or didn't testify at all as part of undisclosed deals with the police. And they've alleged that the performance of Woods's trial attorneys—neither of whom had tried a capital murder case before—was deficient.

Jefferson County Circuit Court Judge Tommy Nail did not allow evidence of police corruption to be presented at Woods' trial because he was not arguing self-defense. This fact, and inadequate representation by his trial and appellate lawyers, ultimately doomed him to death.

Advocates have since slammed the decision to convict Woods for a murder he ultimately did not commit and the poor representation he received at the trial.

"Alabama is scheduled to execute a man who did not commit the murder he has been charged with and his lawyer had no previous experience with death penalty cases. How many more lives will be subject to this failure of a policy?" Hannah Cox, National Manager of Conservatives Concerned About the Death Penalty, told Reason.

Martin Luther King III, son of the iconic civil rights leader, was among the prominent voices pleading for Alabama to spare Woods' life. "Killing this African American man, whose case appears to have been strongly mishandled by the courts, could produce an irreversible injustice," King wrote in his letter to Ivey. "Are you willing to allow a potentially innocent man to be executed?"

These are not the only issues. There is also the use of a non-unanimous verdict, an issue that is currently being presented before the Supreme Court of the United States. The Court has agreed to hear Ramos v. Louisiana, a case that will decide whether or not the Sixth Amendment right to an impartial jury applies to the states, not just the federal government.

A second issue was raised after the state approved execution via nitrogen hypoxia, an alternative to its lethal injection protocol, in 2018. The state failed to inform Woods that his execution would be prioritized if he did not volunteer to be executed by nitrogen hypoxia. The Equal Justice Initiative has since reported that Alabama has publicly acknowledged that it sought execution dates for certain inmates solely because they did not elect to be killed by nitrogen hypoxia.

Woods is highly unlikely to receive a stay of execution. On Wednesday, Alabama Attorney General Steve Marshall released a statement calling Woods a "cop-killer" and rebuffing the reporting on his innocence claims.