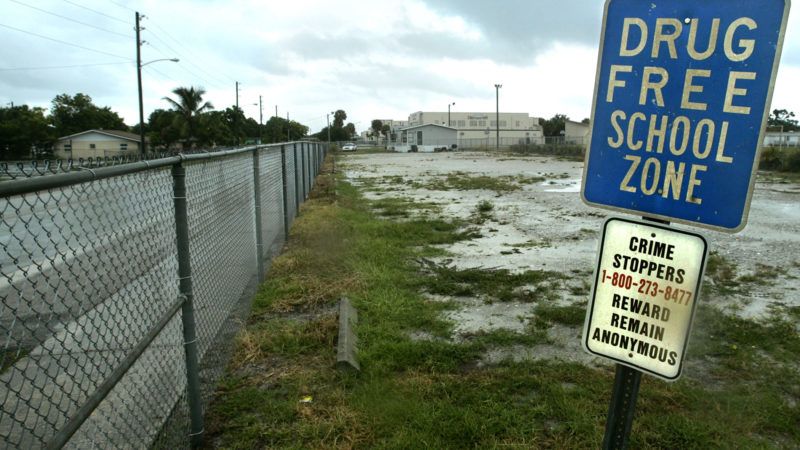 A bill moving through the Tennessee state legislature would reform the state's harsh drug-free school zone laws, which were the subject of a 2017 Reason investigation.

The Tennessee House Judiciary Committee advanced a bill last Wednesday, sponsored by Republican state Rep. Michael Curcio, that would reduce the sizes of the zones. They currently cover the area within 1,000 feet of any school, park, library, or day care; the legislation would reduce that to 500 feet. It would also remove the mandatory minimum sentences for drug offenses within the zones and give judges discretion to waive sentencing enhancements in certain circumstances.

"While this was well-intentioned, unfortunately this policy has not been accomplishing the outcome that the legislature intended," Curcio said during Wednesday's committee hearing. "The main reason for this failure is that drug offenders are not often affected by deterrence-based policies."

"It would also be my argument today that these zones cast far too wide a net in our communities," Curcio continued. "While 1,000 feet might not sound like a lot, over a quarter of the state's total land area within city limits are within a zone."

Curcio cited Reason's data showing that more than a quarter of the state's total land area within city limits is covered by drug-free zones. For example, drug-free zones cover 38 percent of Memphis and 58 percent of East Knoxville.

Drug-free zones spread across all 50 states throughout the 1980s and '90s, as legislators clamored for ways to keep drugs away from children. But civil liberties groups, and even some prosecutors, say the laws are rarely if ever used in actual cases of dealing drugs to minors.

In Tennessee the laws apply even when school is out of session, when the defendant is in a private residence, or he or she just happens to be driving through a zone.

"The unintended consequence of such a large zone is that the law affects more individuals than the general assembly meant to target," Curcio said.

One such case was Calvin Bryant, who at age 20 was sentenced in 2008 to 17 years in Tennessee state prison—15 of them mandatory—for selling ecstasy to a confidential informant out of his Nashville apartment, which happened to be within 1,000 feet of a school.

If Bryant had been convicted of second-degree murder, he would have been eligible for an earlier release. That crime carries a minimum 15-year sentence but includes a possibility for release within 13.

After serving 10 and a half years in prison, Bryant was released in 2018 after prosecutors struck a deal to release him on time served. Bryant now mentors inner-city youth through a nonprofit organization he started.

"I hold myself accountable for participating in a drug transaction, but do I feel like I should have gotten 17 years?" he testified at Wednesday's hearing. "I don't."

Reason found another case of 20-year-old first-time offender who was sentenced to a mandatory 15 years in prison for selling psychedelic mushrooms to a confidential informant for $80.

Bryant told lawmakers that while he was incarcerated, he and other drug-free school zone offenders were ineligible for classes or other educational programming because of their mandatory minimum sentences.

"There were no chances for me to take classes with this charge because I was serving 100 percent, a mandatory minimum," Bryant testified. "Due to us not earning good time, we don't get to participate in classes, so it's hard to better yourself in that kind of situation."

Currently, 358 Tennessee inmates are serving sentences for drug-free school zone offenses, according to data from the Tennessee Department of Corrections obtained by Lauren Krisai, a senior policy analyst at the Justice Action Network. (Krisai is also the former criminal justice director of the Reason Foundation, which publishes this website, and she co-authored Reason's 2017 investigation.)

"With the enhancement, what was happening was somebody might have a couple grams of cocaine, and they'd go to court, hoping to get probation for simple possession," Nashville District Attorney Glenn Funk told Reason in 2017. "Their lawyer would then tell them it's a school zone case, and they're looking at 15 to 25 years in prison. The state offers them eight years to serve at 30 percent, or a 10-year probationary period or something. If the client persists, the lawyer has to say, 'Do you feel lucky? Because if you go to trial and lose, you won't be home for the next couple of decades.'"

Part of Funk's platform when he ran for district attorney included prosecuting drug-free school zone offenses only in cases that involved child endangerment.

State lawmakers introduced similar legislation in 2018, but that bill died in committee when district attorneys pulled their support.

Bryant told state legislators that he hopes future bills will include relief for those still incarcerated.

"It's kind of rough when you're sitting in prison and your injustice is being used for other people's justice that haven't really committed crimes yet," Bryant said. "I pray there's some relief for them down the line.