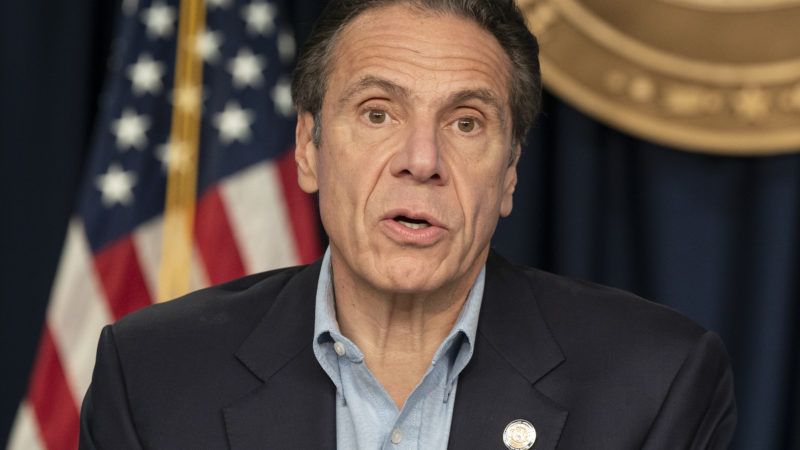 New York's plan to impose a congestion toll on drivers entering the lower parts of Manhattan has hit a bump in the road, with New York Gov. Andrew Cuomo (D) repeatedly claiming that federal officials are slow-walking needed approval of the policy.

"The federal approval, frankly, we just assumed it was going to be almost pro forma. They're now using that opportunity to stop congestion pricing," Cuomo told reporters on Monday, according to The New York Times.

The governor made the same claim last week according to the New York Post, saying in another press conference "Will [the Trump administration] hold congestion pricing hostage? Yes. That's how they do business."

New York's congestion pricing plan was passed in April 2019 as part of the state's budget. It would impose a toll on all drivers entering Manhattan streets below 60th Street, save for motorists who drive only on the island's West Side Highway or FDR Drive.

The plan requires that some 80 percent of the revenue from these congestion tolls be spent on the city's subway, with another 10 percent being dedicated to regional rail services.

The plan calls for having the tolls in place by January 2021, but there are still a number of details to be worked out, including how high congestion tolls should be, and who should get credits or exemptions.

That requires difficult political wrangling with powerful constituencies, from cops to truckers, who all have argued they deserve a carve-out. It also requires New York to get permission from the federal government.

Currently, there exists a general prohibition on states and localities adding tolls to roads that were funded in part by the federal government. The Federal Highway Administration (FHWA) does administer a couple of programs that make exceptions to this ban. That includes the Value Pricing Pilot Program (VPPP), through which the federal government can approve pilot congestion pricing programs to reduce congestion on existing roads.

Receiving authorization through VPPP also requires proposals to go through environmental reviews mandated by the National Environmental Policy Act (NEPA). How long that will take all depends on what level of NEPA review federal officials deem appropriate.

If New York were lucky, it would receive a categorical exemption from NEPA. More likely it will have to prepare an Environmental Assessment (an intermediate level of review) or worse, an Environmental Impact Statement (EIS). Those run an average of 670 pages and can take years to complete.

Right now, the FHWA is in the middle of determining which level of NEPA New York's congestion pricing scheme requires. That determination will tell New York officials what information they'll have to prepare for the feds.

Officials with the New York City government and the Metropolitan Transportation Authority (MTA)—the state agency that runs buses and trains in New York City—say they've been trying to get an answer from the feds about what kind of report they need to prepare since April 2019.

An FHWA spokesperson told Reason that the agency didn't receive the supplemental information it needed to make a NEPA determination until January 2020, and it's that delay, not Cuomo's claimed political interference, that's dictating the pace of federal review.

As recently as February 8, Cuomo told the Wall Street Journal that he wasn't concerned about the potential for the Trump administration to hold things up for political reasons.

The governor could be doing a lot more to speed things along in the face of federal delays, argues Manhattan Institute transportation scholar Nicole Gelinas, who wrote in the New York Post:

[Cuomo could] have directed the MTA to take a more aggressive posture. The MTA could have prepared a short "environmental assessment," hiring consultants to say the scheme will help the environment by discouraging people from driving. The MTA could start preparing the longer document, just in case. It requires public hearings, which are a pain, but the city completed its environmental-impact statement for its four-borough jails from start to finish in 14 months, meaning the MTA would be almost done now.

The fact that Cuomo hasn't done those things, says Gelinas, suggests that he's already gotten all the political mileage out of congestion pricing he can, and sees only liabilities in actually implementing the policy.

Cuomo risks pissing off motorists who will now have to pay for something they used to enjoy for free. This dynamic isn't made better by the specific design of New York's congestion pricing scheme, says Baruch Feigenbaum of the Reason Foundation, the nonprofit that publishes Reason.

"I think the concern is that very little of the money from the congestion price is going to improve roadways," he said, adding that the proposed toll levels seem to have more to do with hitting revenue targets for funding transit than with easing congestion.

Feigenbaum notes that Trump isn't above petty retribution when it comes to New York, noting his administration's brazenly political decision to bar residents from that state from participating in Trusted Traveller programs that allow quicker passage through airport security.

Still, Feigenbaum says he hasn't seen any evidence that this is the case with congestion pricing. Indeed, Trump has proposed reforms that would speed up NEPA reviews of projects, and limit the use of EIS.

Congestion pricing as a concept has a lot to offer a place like New York City, says Feigenbaum. There's a lot of demand for driving on the roads, but very little space for adding new road capacity. As with most major reforms, it's the politics of implementation that are slowing things down.