The problems with federal sentencing guidelines are real and troubling, even in cases that do not involve the president’s pals. 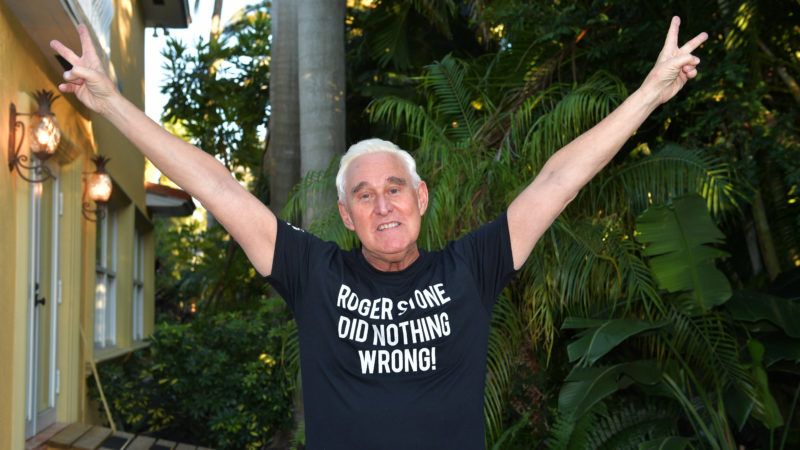 "Roger Stone Did Nothing Wrong!" proclaimed the T-shirts worn by his supporters. Federal prosecutors, by contrast, argued that Stone deserved at least seven years in prison.

U.S. District Judge Amy Berman Jackson split the difference last week, sentencing the longtime Donald Trump crony to three years and four months in prison—a penalty that still seems excessive given the nature and consequences of his crimes. In addition to the perils of presidential pronouncements about ongoing criminal cases, the case highlights the dubious wisdom and fairness of federal sentencing guidelines.

When Attorney General William Barr overrode the original sentencing recommendation for Stone, which called for a prison term of seven to nine years, the resulting controversy focused on the appearance that he was acting at his boss's behest. But whatever the motivation for the amended sentencing memorandum, which recommended "a sentence of incarceration far less" than the one originally proposed, it raised legitimate concerns that should figure in the penalties imposed on all federal defendants.

Stone was convicted of lying to a congressional committee about his attempts to help elect Trump by contacting WikiLeaks, which had obtained emails that Russian hackers stole from the Democratic National Committee and Hillary Clinton's campaign chairman. He was also convicted of witness tampering because he persistently pressured his erstwhile friend Randy Credico, one of his WikiLeaks intermediaries, to refrain from contradicting those lies.

Contrary to the claims made by some of Stone's defenders, he did not stumble into a "perjury trap" set by the president's enemies. When he voluntarily testified before the House Intelligence Committee, which was investigating Russian attempts to influence the 2016 election, the panel was controlled by Republicans and chaired by Rep. Devin Nunes (R–Calif.), a Trump ally.

Stone easily could have avoided his legal troubles by declining to testify or by telling the truth. Instead he lied, repeatedly and flagrantly, about his contacts with people he thought could relay messages to WikiLeaks, about his communications with Trump campaign officials, and about the emails and text messages that documented those interactions.

Having lied, Stone persistently pressured Credico to back up his story or avoid testifying. When Credico received a subpoena, he invoked the Fifth Amendment, as Stone had suggested.

Judge Jackson indignantly rejected the idea that none of this was a big deal, and she had a point. Unless you think Congress has no business holding hearings on issues such as foreign meddling in U.S. elections, it seems clear that witnesses at those hearings cannot be allowed to lie with impunity.

Yet the actions Stone tried to conceal, while potentially embarrassing to the president, were neither criminal nor consequential, and the facts eventually emerged despite his dishonesty. And while the assistant U.S. attorneys who prosecuted Stone argued that he deserved a hefty sentencing enhancement for threatening Credico with violence, Credico himself implored Jackson not to impose a prison sentence, emphasizing that he never took the defendant's bluster seriously.

In addition to making that point, the amended sentencing memorandum questioned "the two-level enhancement for obstruction of justice," which was based mainly on Stone's public statements about his case. While conceding that the enhancements recommended by Stone's prosecutors were "arguably" consistent with the guidelines and "perhaps technically applicable," the second memorandum argued that the resulting sentencing range was disproportionate for nonviolent crimes.

The memorandum noted that prosecutors have a duty to pursue justice, not simply to clobber defendants with the heaviest penalties the law allows. It thereby called attention to the disjunction between just punishment and the sentences recommended by the guidelines, which have long been criticized as excessively harsh, mechanical, and complicated yet blind to relevant moral differences.

"Many defense attorneys and judges have been making that point for a very long time," Jackson noted last week, "but we usually don't succeed in getting the government to agree." The problems with the guidelines are real and troubling, even in cases that do not involve the president's pals.