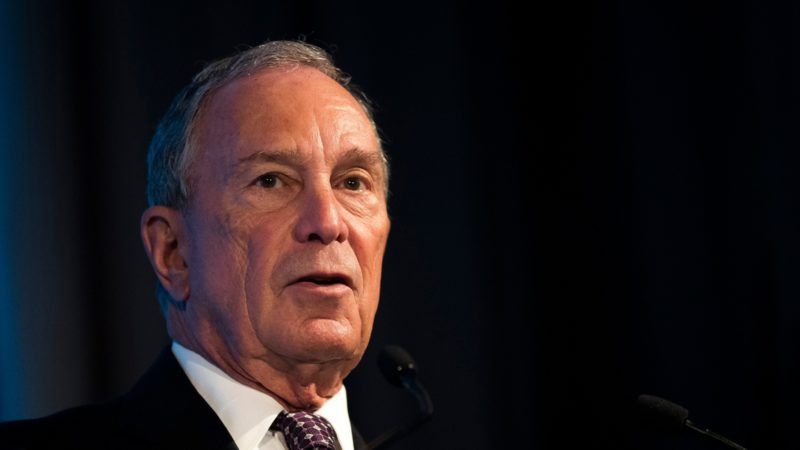 Former New York City Mayor Michael Bloomberg during Tuesday night's presidential debate in South Carolina twice stressed the importance of basing policy on good "science," while defending his idiosyncratically intrusive approach to public health. It is lamentable, though not at this late stage surprising, that the 78-year-old billionaire continues to not let facts get in the way of his passion for limiting Americans' choices.

Bloomberg, who bragged during his first campaign that he "enjoyed" smoking pot then promptly turned Gotham into the marijuana arrest capital of the world, was asked by CBS News anchor Gayle King about his now-atypical prohibitionist stance, particularly since he has previously (in King's paraphrasing) "called marijuana another addictive drug that we've never done research on."

"Look, the first thing you do is we should not make this a criminal thing if you have a small amount. For dealers, yes, but for the average person, no, and you should expunge the records of those that got caught up in this before," Bloomberg said. Then: "We're not going to take it away from states that have already done it."

As Jacob Sullum has noted in these pages, this position, while better than the one Bloomberg staked out during his three mayoral terms, is fundamentally incoherent, since "as long as producing and distributing cannabis remain illegal, of course, the government will still be 'putting people in jail for marijuana'….If people should not be arrested for marijuana use, as Bloomberg now claims to believe, it is hard to see why people should be arrested merely for facilitating marijuana use."

But what rankles even more than the bad policy is the smug, self-satisfied, pseudo-scientific hubris with which Bloomberg then attempted to sell his continued opposition to legalizing a non-lethal recreational drug enjoyed peaceably by tens of millions of Americans.

"You should listen to the scientists and the doctors. They say go very slowly," he claimed. "They haven't done enough research. And the evidence so far is worrisome. Before we get all our kids, particularly kids in their late teens, boys even more than girls, where this may be damaging their brains. Until we know the science, it's just nonsensical to push ahead."

The worrisome "evidence" Bloomberg is almost certainly alluding to here is a shoddy and near-universally misreported study about pot use on the brain that serious researchers eviscerated on arrival back in 2014. And yet this doesn't begin to do justice to Mayor Mike's incandescent insincerity on the issue of marijuana science.

If indeed scientists "haven't done enough research," the biggest single impediment to that discovery has been a suppressive federal government informed by the same kind of prohibitionism Bloomberg has long practiced publicly, if not quite personally.

Nevertheless, some science has persisted—enough to allow the Food and Drug Administration to approve a synthetic version of THC for nausea way back in 1985, and various spinoffs thereafter. Yet as recently as 2013, the proudly ignorant mayor was calling marijuana's health benefits "one of the great hoaxes of all times," and snorting, "Yeah, right, 'medical,' my foot."

As Sullum noted then, "it is worth highlighting how woefully misinformed this supposedly smart and scientifically sophisticated technocrat is on the subject of marijuana's therapeutic utility….Contrary to what his dismissive tone suggests, Bloomberg has no idea what he's talking about….[His] arrogance is, if anything, more infuriating than his ignorance."

Also cloaked in the holy mantle of managerial lab-coatery Tuesday was Bloomberg's infamous mayoral record as a nanny-state busybody controlling the consumption habits of poor fatties. The good news is that the Democrats' very own trash-talking Manhattan billionaire recognizes that New York City isn't necessarily a model for the rest of the country. The bad news is that he continues to espouse some of the most intrusive philosophies of governance in all American politics.

"I do think it's the government's job to have good science and to explain to people what science says or how to take care of themselves and extend their lives," he said. "We are a country where there are too many people that are obese. We should do something about that."

He later added this non-humble brag: "Before I left, life expectancy in New York City had grown by three years during our 12 years in office, such that when I left, it was three years greater than the national average."

True? New York Times fact-checkers note that the number is actually 2.3 years greater than the national average, and that "research has also suggested that New York's high rate of immigrants may also explain part of the trend: Poor immigrants, in general, tend to be healthier than native-born Americans of similar incomes."

Like his notorious Stop, Question, and Frisk policy, some of Bloomberg's consumption-restrictions were eventually deemed by courts to run afoul of the law.

But the important thing for the pint-sized entrepreneur and those who nod along to his we-respect-science claims is that he is the avatar of technocrats who actually do not.

Bloomberg is the country's leading advocate for banning e-cigarettes in the name of public health, despite conclusive proof that vaping is one of the best harm-reduction strategies that smokers can employ short of quitting nicotine altogether. He is also the leading advocate for gun control, in which service he tells campaign whoppers about children killed by gun violence that are just 73 percent off the mark.

Nonetheless, credit where credit's due to the Democratic presidential candidate currently polling in third place nationally after dropping a cool half-billion on his three-month quest: The government should listen more often to scientists and doctors. Then maybe politicians wouldn't campaign on such anti-scientific, freedom-restricting claptrap.