Competing Brands of Authoritarianism Are All Trump and Democratic Candidates Offer

The real resistance is made up of those who refuse to be governed by any of the wannabe rulers. 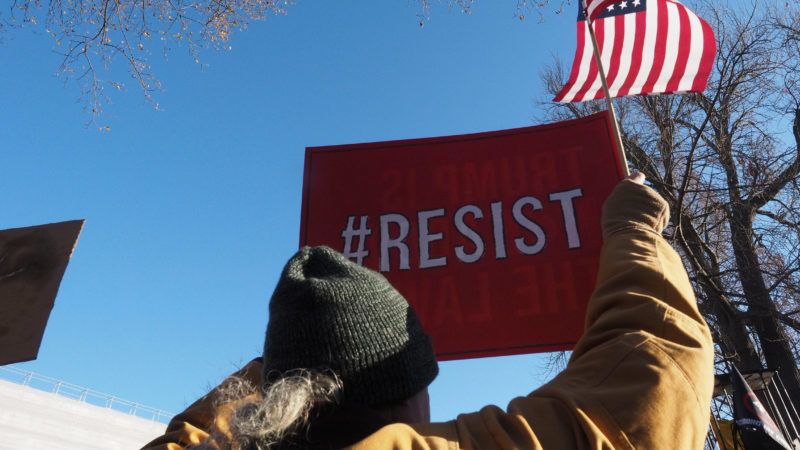 Do presidential debates have you considering likely places to stash your cash? Do political polling results have you contemplating waiting it all out in a mountain retreat? Rest assured that you're not overreacting; you're sensibly responding to a political culture that has turned very welcoming to authoritarian candidates and intrusive policies.

There's a good chance that freedom in the days to come will be most available to those willing to hide from the state, break its laws, and sabotage its efforts.

If presidential types once—however insincerely—warned that "government is not the solution to our problem; government is the problem," or promised that "the era of big government is over," the current crop of candidates prefer to offer up the state as the provider of all our needs, the soother of every concern, and the slayer of all our foes—especially those nasty fellow citizens who think and live differently.

Incumbent President Donald Trump has spent much of his first term catering to xenophobia. He demonizes foreigners, whether they want to come here as immigrants or just sell products to Americans. Immigration restrictions and protectionism inherently require a larger and more intrusive role for the state, leaving little room for a government that will just leave you alone. That trade and migration restrictions both inflict domestic economic damage seems largely irrelevant to his supporters, who embrace nativism as a cause in place of leaving people free to make their own way in the world.

The Democrats who hope to unseat Trump have also sidelined any talk of liberty in favor of appeals to envy and the desire for stuff paid for by somebody else. The wealth tax favored by candidates including Sens. Bernie Sanders (I-Vt.) and Elizabeth Warren (D-Mass.) is likely unconstitutional. It's also bound to cripple economic dynamism while driving the rich—who not only have more money than you and I, but better financial advisers—to hide their cash overseas.

Many of the president's rivals are fond of promising "free" stuff, like college. It's a tempting offer for students groaning under debt burdens who don't realize that earlier government attempts to make college more accessible play a big role in soaring tuition. And never mind that "free" college is going to cheapen the value of the resulting credentials putting the supposed rewards of the policy further out of reach.

Candidates of both major parties offer something else that's likely to be expensive in the long run—an opportunity to punish rival political tribes through the force of law. Amidst lots of huffing and puffing about "deplorables" and "coastal elites," most of the candidates get lots of mileage out of channeling the partisan rage that too many Americans feel toward their fellow countrymen. Actually, those kinds of insults are becoming quaint, since calling opponents "traitors" is the popular new way of expressing strong disagreement.

And political disagreements these days really are strong. Just over 42 percent of the people in each party view the opposition as "downright evil," according to research published last year by Nathan P. Kalmoe and Lilliana Mason, political scientists at Louisiana State University and the University of Maryland. "Violence would be justified" if the opposing party wins the 2020 presidential election say 18 percent of the surveyed Democrats and 13 percent of Republicans.

There's not a lot of room for live-and-let-live in satisfying the demands of supporters who want to battle "downright evil" enemies.

In this climate of political animosity, it's no surprise that the leading candidates of the moment have lots of comfort with wielding the power of the state.

In addition to his taste for border controls and trade wars, the president has a penchant for threatening to use government against those who annoy him. Trump threatened both tax and antitrust actions against Amazon, explicitly linking his threats to criticism of his administration by The Washington Post, which shares Jeff Bezos as an owner.

Michael Bloomberg won Reason's ranking in 2013 as the number one enemy of freedom for his nanny-state approach to public health and personal choice, as well as "his enthusiasm for gun control, his illegal crackdown on pot smokers, and his unflagging defense of the New York Police Department's stop-and-frisk program."

Current Democratic frontrunner Bernie Sanders appears to have (we hope) abandoned his early support for government takeovers of businesses including utilities and the oil industry. Likewise, he's no longer affiliated with the Trotskyite Socialist Workers Party. But his brand of "democratic socialism" apparently offers lots of wiggle room for unilateral action, including the dozens of executive orders his campaign has reportedly prepared as a means of bypassing congressional opposition to his policies if he wins the presidency.

That's not to say that President Trump or his Democratic opponents are purely authoritarian across the board.

The president has promoted reductions in business regulation and promoted school choice, among the positive moves of his administration. Sanders calls for reining-in the surveillance state. Bloomberg slams his party's drift toward socialism in general and Sanders' history, in particular. Long-shot candidate Rep. Tulsi Gabbard (D-Hawaii) even wants to end drug prohibition.

But these aren't the defining issues in a campaign in which candidates rarely propose leaving people alone, and no major-party candidate has made that a central feature of his or her campaign. Instead, this has turned into an election season defined by different flavors of control freakery, competing proposals to expand government, and warnings about the awesome power of the state to squash domestic opposition.

For those of us looking not for goodies or political thuggery, but for more breathing room instead, there's little encouragement to be found in the debates and the polls. Instead, we'll have to look for loopholes in laws, exceptions to intrusive policies, and ways to confound tax men and inspectors. Our real votes will be for preferred encryption software, places to hide our money and information, and caches for forbidden goods. If we want to retain or expand our freedom, we'll need to stay under the radar as we ignore the powers-that-be, or else make ourselves more trouble to push around than we're worth.

While Trump's Democratic opponents have spent the years since the last presidential election valorizing themselves as "the resistance," all they have to offer is a competing brand of authoritarianism. The real resistance is made up of those who refuse to be governed by any of the wannabe rulers.