Critics say the long-running satiric cartoon has created "a generation of boys" who are smug and disengaged. 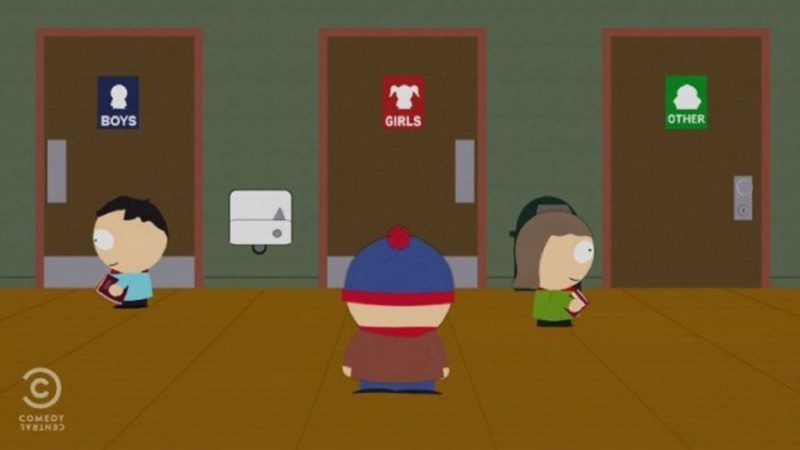 Last week, the long-running and iconoclastic cartoon South Park got dragged yet again, this time for allegedly teaching "a generation of boys…that it was always cooler to be reactionary and contrarian, and anyone who criticizes anything is 'offended' and that's the *real* problem." A Twitter thread started by novelist, podcaster, and TV writer Dana Schwartz caught enough buzz to get trending on the micro-blogging site. It's worth pausing over her critique, since it reflects past attacks and, more importantly, is fundamentally wrong in its substance.

Far from inculcating moral nihilism and a shallow "pox on both your houses" mentality, South Park traffics in a smart skepticism toward power in all of its manifestations and provides over two decades worth of lessons on how to be a decent, tolerant, smart, and funny human being despite living in a world that is casually brutal, disgusting, and indifferent to suffering (watch the 2001 episode "Scott Tenorman Must Die," a version of Seneca's horrific Thyestes if you have any doubt).

In retrospect, it seems impossible to overstate the cultural damage done by SOUTH PARK, the show that portrayed earnestness as the only sin and taught that mockery is the ultimate inoculation against all criticism

People saying "they make fun of everyone!!!" — that is my point. South Park IS a political show, but one whose message is: both sides are equally terrible so the only correct thing to do is nothing, while mocking it all from your position of intellectual superiority.

Schwartz argues that South Park traffics in moral relativism, or perhaps a form of ideological nihilism, because she believes its core message is "the only correct thing is to do nothing." In her tweets on the topic, she admits in passing that she hasn't "been watching the show in recent seasons," which helps to explain why her critique is so wide of the mark.

In the early days of the show, critics were already deriding the show as "dangerous to democracy" and "vile trash" that poisoned young viewers' minds. But as Barry Fagin wrote back in 2000 for Reason, the show was "loaded with moral content" and taught his then-10 and 12 years old kids valuable lessons, including "it's good to make fun of people who believe stupid things," "it's good to make fun of hypocrisy," and "things that happen in cartoons aren't real."

That last point was particularly important in the 1990s, when both liberals and conservatives were desperately trying to control the information explosion that came along with cable television and the internet. By representing the need for critical consumption of both expertise and information, South Park, like other shows that helped define the '90s (think The Simpsons, Beavis and Butt-Head, and Mystery Science Theater 3000) helped to develop media literacy in millions of viewers.

I'd go further still and underscore that South Park teaches at least three basic lessons in virtually every episode. The first is that people in authority need to earn our respect rather than assume it. The second is that cultural, moral, and political diversity is both the real state of nature and can only be sustained through honest and open discussion about our differences. The third is that personal responsibility is the key to a flourishing society and the foundation of positive communal action. These points are summarized in this brief video from 2013:

3 Reasons All Kids Should be FORCED to Watch South Park!

So the 19th (!) season of South Park kicked off on Wednesday. The episode nudges into instant-classic territory, managing to satirize the Patriots' QB Tom Brady, Caitlyn Jenner, and zero-tolerance-crazed school officials in a way that is both sacred and profane (but mostly the latter, thank Zog). And there's quite possibly the greatest dream sequence in TV history since Newhart's final episode in You can watch the full South Park episode, "Stunning and Brave," online for free at Southpark.cc.com.A couple of years ago, Reason TV released "3 Reasons All Kids Should Be FORCED to Watch South Park." Spoiler alert: We were being super-cereal about that. Really.Here's the text, which accompanied the 2013 video that Jim Epstein and Nick Gillespie put together.One of the longest lived and most controversial TV shows of all time – South Park – is kicking off its 17th season.Despite being a cartoon, South Park was the first weekly TV show to be given an MA rating, meaning it's intended for mature audiences. And it's certainly packed with foul language, off-color humor, and adult situations.But it's also truly educational, especially for children. So here are three reasons why all parents should make their kids watch South Park.1. Disrespect My Authoritah!Virtually every episode points out the difference between legitimate authority and the abuse of power and scare-mongering. Whether it's the show's Jew-baiting jerk Eric Cartman going nuts as a traffic cop or former Vice President Al Gore trying to scare the boys into hysteria over ManBearPig, South Park always emphasizes thinking for yourself rather than blindly following what leaders say.2. Respect True Diversitah!Today's kids are constantly force-fed hosannas to tolerance and diversity that ring hollow and false. But even when it's brutally satirizing something like Mormonism, South Park actually fosters a true live-and-let-live ethos that's sadly lacking in most K-12 curricula.3. It Emphasizes Personal ResponsibilityAmong South Park's core values is taking responsibility for one's actions. In the episode where Stan's father develops a drinking problem and seeks supernatural intervention for a cure, it's the child who lays out the case for self-control and accountability.The most enduring lesson of South Park isn't found in any given episode but in the entire show's run and the careers of its creators, Trey Parker and Matt Stone. The show grew out of early videos, including a 1995 one that pitted Santa vs. Jesus in a fight to the death over the true meaning in Christmas.Now, almost 20 years later, Parker and Stone have created one of the greatest TV shows of all time, along with unforgettable movies such as the all-puppet action thriller Team America and the Broadway smash The Book of Mormon.They're no uncritical fans of Walt Disney but their careers are a testament to his belief that "If you can dream it, you can do it."In a way that's virtually unmatched, Parker and Stone teach all our children that creativity and hard work – and an ability to laugh at everything life throws at you - eally do pay off in the long run.About 3 minutes. Written by Nick Gillespie, who narrates, and produced by Jim Epstein. Scroll below for downloadable versions and subscribe to Reason.tv's YouTube channel to receive automatic notifications when new videos go live. More at https://reason.com/blog/2015/09/18/south-parks-19th-season-debuted-on-wedne

At one point in her tweetstorm about South Park, Schwartz writes, "To be clear, I don't blame the show itself as much as I do the generation of boys who internalized it into their personalities. Which maybe isn't the show's fault!" There's no question audiences have a mind of their own and consumers of a given text routinely (and legitimately) interpret that text in ways that confound its creator's intentions. So it's possible that rather than create an audience that is smarter and more skeptical of information and power, South Park has instead simply created an army of douchebros who act more like Cartman rather than Stan or Kyle. But since South Park first aired back in 1997, the country has become vastly more tolerant toward all sorts of marginalized people and causes and no view of the show could miss what side its creators are on when it comes to out-groups ranging from immigrants to trans people to Mormons. We may indeed be more vulgar as a society, but we're also generally more tolerant and engaged too (the youth vote for the 2018 midterms was the highest in decades). South Park might not deserve much or even any of the credit, but it doesn't deserve any of the blame either.

Related: Read the 2006 Reason interview Jesse Walker and I conducted with Matt Stone and Trey Parker.