Eight Republicans join the vote, but that's not enough to overrule a likely veto. 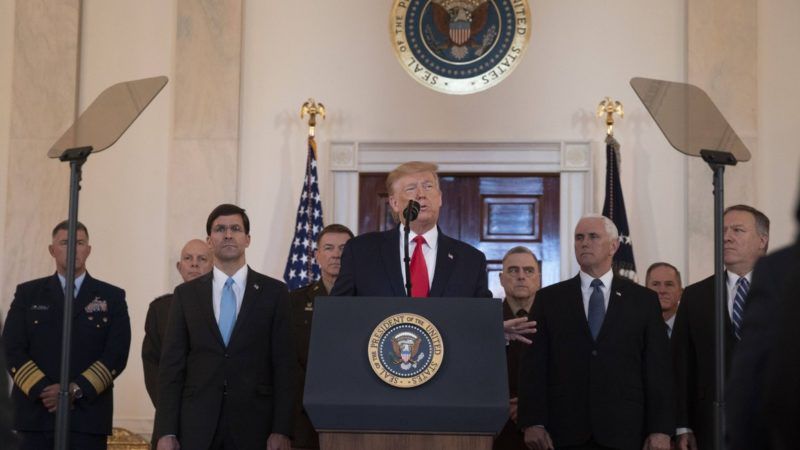 With the support of eight Republicans, the Senate today passed a bill forbidding President Donald Trump (or really, any president) from taking further military action against Iran without the expressed permission of Congress.

By a vote of 55-45, the Senate approved a resolution by Sen. Tim Kaine (D–Virginia) that states Congress did not authorize military actions against Iran when it passed Authorization for Use of Military Force (AUMF) legislation in 2001 and 2002. That AUMF allowed the president to invade Iraq and also to hunt down al-Qaeda and those responsible for the Sept. 11 attacks. The resolution orders the president to "remove United States Armed Forces from hostilities against the Islamic Republic of Iran or any part of its government or military" within 30 days of the resolution passing.

The bill was pushed forward after Trump authorized the drone-strike assassination of Iranian Gen. Qassem Soleimani. Though the administration claimed that the strike was necessary to prevent an "imminent" attack against Americans in the Middle East, there was little to support this claim, and a couple of Republican senators, including Rand Paul (Ky.) and Mike Lee (Utah), were upset by the unapproved actions. They announced plans to cross the aisle and join Democrats to pass the resolution.

The bill heads now to the House, which passed a similar, but non-binding resolution. If the House signs on to the Senate version (which seems very likely), it will head to Trump's desk.

Despite saying regularly he'd like to see less military intervention in the Middle East, Trump is signaling that he opposes this bill. Yesterday on Twitter, Trump called on Republicans to vote it down, claiming it would "show weakness" to restrain his war powers. The bill is likely to face a veto, and if this vote is any indication, the Senate lacks enough Republican votes to overrule him.

Nevertheless, at least some Republicans are taking seriously Congress's role in declaring war.