If the president wants voters to take him seriously, he should stop pretending the problem has been solved. 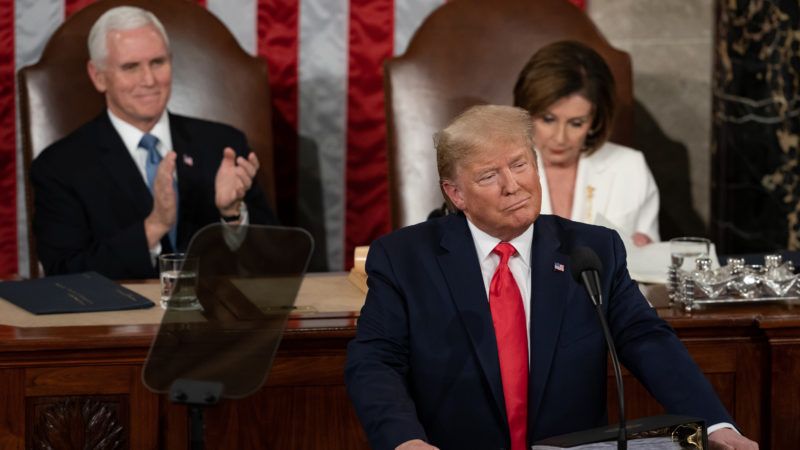 Donald Trump, who ran for president in 2016 on a "law and order" platform borrowed from Richard Nixon, is running for re-election as a criminal justice reformer. That transformation would be more convincing and politically potent if it included things he plans to do as well as things he has already done.

This month the Trump campaign ran a Super Bowl ad featuring Alice Johnson, a nonviolent drug offender whose life sentence the president commuted in 2018. The ad also highlighted Trump's support for the FIRST STEP Act, a law that is expected to free more than 3,000 federal drug offenders and shorten the sentences of another 2,000 or so each year.

Trump brought up both of those subjects in his 2019 State of the Union address, during which he introduced Johnson, who was sitting in the audience. In last week's SOTU speech, he touted the FIRST STEP Act as a "landmark criminal justice reform" that has given people a "second chance at life."

So far Trump has commuted just six sentences, including Johnson's. Yet that is six times as many as Barack Obama, who eventually issued more commutations than any president in history, managed during his first term.

Trump deserves credit for signing the FIRST STEP Act despite resistance from hard-line Republicans such as Sen. Tom Cotton (R–Ark.). But as the law's name suggests, its reforms—which include several changes that will reduce future drug sentences, retroactive application of the lighter crack cocaine penalties that Congress approved in 2010, and expanded time credits for good behavior and participation in job training and rehabilitation programs—are modest in the context of 175,000 federal inmates and a total prison and jail population of more than 2 million.

Trump's concern about "very unfair" drug sentences, which has been reinforced by advice from his daughter and son-in-law as well as celebrities such as Kanye West and Kim Kardashian West, seems sincere. "Alice's story underscores the disparities and unfairness that can exist in criminal sentencing, and the need to remedy this total injustice," he said in last year's SOTU address.

Following those instincts makes political sense for a president who wants to improve his standing among black voters, only 8 percent of whom supported him in 2016, and reassure white moderates who may be troubled by allegations that his administration is racist. Furthermore, criminal justice reform is a bipartisan, trans-ideological issue, as reflected in the overwhelming support for the FIRST STEP Act in the House and Senate.

If Trump wants to be taken seriously as a reformer, however, he will have to do more than brag about his accomplishments. While the leading Democratic presidential candidates all support additional steps beyond the FIRST STEP Act, Trump's campaign website is silent on that point.

Former Vice President Joe Biden, who played a major role in creating the draconian sentences that Trump decries, now says he wants to eliminate the penal disparity between the smoked and snorted forms of cocaine, along with mandatory minimum sentences, incarceration for drug use, and the federal death penalty. Biden favors expungement of "cannabis use convictions" and promises to "broadly use his clemency power for certain non-violent and drug crimes."

Trump does not need to match the Democrats point by point. But he undermines his own case when he advocates harsher penalties for opioid offenses and praises China's death penalty for drug dealers, as he did once again this week.

The president was right when he described federal drug penalties as "very unfair" and a "total injustice." But if he wants voters to believe a second term for him will mean more progress on that issue, he needs to stop leaving the impression that he thinks the problem has already been solved.