Corporate Socialism? Bill Barr's Suggestion That the U.S. Should Buy Nokia or Ericsson To Counter China Is a Terrible Idea.

If the only way to beat China is to become like China, then we've already lost. 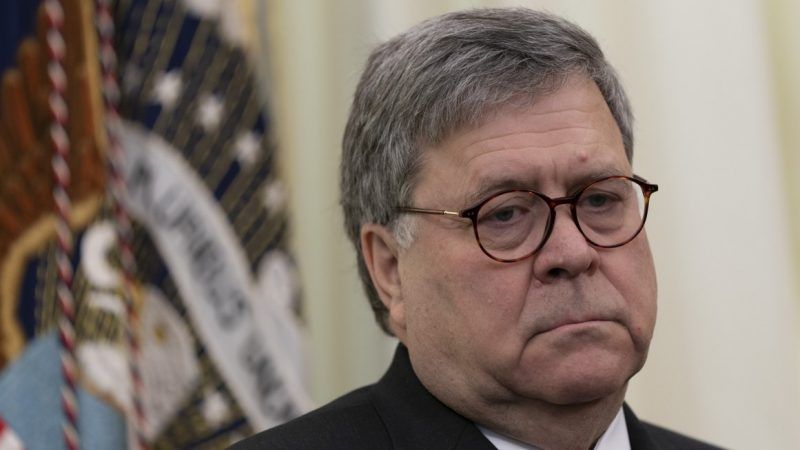 During his State of the Union address last week, President Donald Trump repeatedly invoked the specter of socialism—it "destroys nations," he warned.

But by the end of the week, one of the highest-ranking officials in the Trump administration was openly suggesting that America should engage in one of the hallmarks of socialism: a state takeover of a private company.

In a speech last Thursday, Attorney General Bill Barr floated the idea that the United States could purchase a majority stake in tech companies like Sweden-based Ericsson or Finland-based Nokia as a way to counter the growing prominence of China's Huawei as the world's leading provider of fifth generation (5G) mobile internet hardware.

"Putting our large market and financial muscle behind one or both of these firms would make it a more formidable competitor and eliminate concerns over its staying power," Barr said. "We and our closest allies certainly need to be actively considering this approach."

He even wrapped his idea in socialist language, saying that the United States must "act collectively" to stand up to China's rising economic power and technological developments. He might not have been calling for a Marxist-style seize-the-means-of-production uprising, but Barr's pitch for some kind of techno-corporate socialism is still shocking—even by the standards of an administration that has embraced central industrial planning as an anti-China strategy. It was all the more so because it came during in a prepared, formal speech, not as an off-the-cuff remark that later needed to be walked back.

But walked back it was. Vice President Mike Pence and Larry Kudlow, the White House's chief economic advisor, later denied that the Trump administration was considering the plan Barr had outlined. "U.S. government is not in the business of buying companies, whether they're domestic or foreign," Kudlow told Reuters on Friday.

Still, Barr floating an idea that basically amounts to "in order to beat China, we must become like China" is an example of how the White House is straying into dangerous territory as it struggles to respond to the perceived threat posed by Huawei. The risk of overreaction seems high.

The Trump administration argues that Huawei represents a national security risk. In December, Secretary of State Mike Pompeo warned that the Chinese government could co-opt Huawei to "steal private or proprietary information, or use 'kill switches' to disrupt critical future applications like electrical grids and telesurgery centers." Just this week, America's intelligence community sounded the alarm about potential "back doors" built into Huawei gear—though the warning comes with a heavy dose of irony, as Reason associate editor Scott Shackford noted earlier today.

But the Pentagon has pushed back against the White House's and Commerce Department's anti-Huawei actions, suggesting that those policies might have more to do with politics than legitimate national security worries.

When the British government announced late last month that it would not prohibit Huawei gear from being used in the country's mobile internet infrastructure, Trump "vented 'apoplectic" fury at [British Prime Minister] Boris Johnson in a tense phone call," according to a Financial Times report citing two administration officials familiar with the call.

Like last week's kerfuffle over potentially having the U.S. government buy Nokia or Ericsson—Huawei's biggest competitors on the global market for 5G equipment—that phone call and other anti-Huawei actions taken by the Trump administration demonstrate that the White House is struggling to develop a coherent 5G policy, writes Daniel Drezner, a Tufts University professor, Washington Post columnist, and Reason contributor. Current policies have not stopped Britain and other countries from buying Huawei gear, so the Trump administration may be signalling its intention to escalate tactics.

It may be tempting to dismiss Barr's trial balloon as nothing more than a policy misfire, but there is clearly a contingent of the current administration that favors state control and central planning as the only way to develop 5G networks faster than China.

How else to explain why different versions of this same bad idea keep resurfacing? In January 2018, a leaked memo from the National Security Council compared the development of 5G infrastructure to the building of the national interstate highway system, and suggested that the Trump administration should nationalize broadband service as a way to stay ahead of the Chinese government's development of similar tech. The idea was widely condemned by the tech industry, by members of Congress on both sides of the aisle, by the FCC, and by top White House policy advisers such as Larry Kudlow.

A variation on the same idea surfaced last year, and was promoted by Former Speaker of the House Newt Gingrich, who wrote an op-ed calling for the nationalization of 5G rollout. "Our own laissez-faire tendencies and preferences are being used to defeat us," he wrote.

Thankfully, those proposals have failed to take off, in part because Kudlow and Federal Communication Commission Chairman Ajit Pai have pushed for a hands-off approach that puts the private sector at the forefront of 5G deployment. Trump has endorsed that plan, but his tempestuous nature means a reversal is always possible.

And the idea of a government takeover of Ericcson or Nokia could resurface again in a different form. "It wouldn't be a surprise if an American telecom or a group of private equity firms bid for Nokia or Ericsson—with some kind of special subsidy or tax break provided by the White House," The New York Times reported last week, shortly after Barr's trial balloon came crashing down.

Because if straight-up socialism doesn't fly, try it with a side of cronyism, I guess.

There is little reason to think an American government takeover of one of the Nordic tech giants would reduce any of the security risks posed by Huawei. More likely, it would only serve as a way for America to put diplomatic pressure on other countries to use certain products in building their 5G networks.

There is certainly a role for the United States to play in ensuring that the next generation of mobile internet is free and open around the world. But having the American government buy its own tech company in an attempt to copy China's relationship with Huawei? That's not it.