You have this Democrat or this other Democrat. What other options do you need? 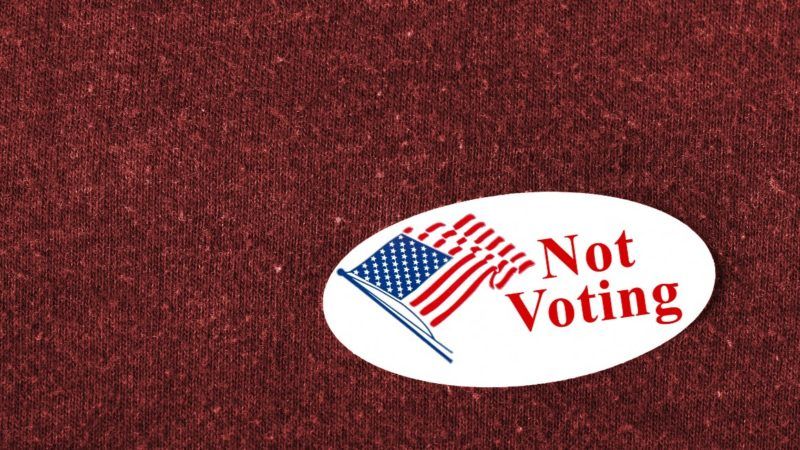 When a state is almost completely dominated by one party, some people aren't very enthusiastic about voting. One California lawmaker thinks he has a solution to that: Make voting mandatory.

Last week, Assemblymember Marc Levine (D–San Rafael) introduced AB-2070, a bill that would require every person who registers to vote to "cast a ballot, marked or unmarked in whole or in part, at every election." The legislation says it will be up to the secretary of state to enforce this mandate, but it doesn't really say how.

To explain himself, Levine put out a statement filled with tiresome bromides about the importance of voting:

Democracy is not a spectator sport—it requires the active participation of all its citizens. California is a national leader on expanding voting rights to its citizens. Those rights come with a responsibility by registered voters to cast their ballot and make sure that their voice is heard by their government. This is not a time to be complacent at the ballot box. My AB 2070 will ensure that the voices of all California voters are heard loud and clear.

That's an odd argument, given that California has gone out of the way to limit voters' choices at the polls in November elections.

That's why Kamala Harris faced off against a fellow Democrat when she was elected to the U.S. Senate in 2016. It's why Sen. Dianne Feinstein didn't face a Republican, let alone any third-party candidates, when she won re-election in November 2018. Indeed, this is the system that helped Levine keep his seat in 2018: He defeated another Democrat, Dan Monte. No Republicans ran against Levine at all in 2018. Maybe they took a lesson from 2016's election, when a second Democrat crowded Republican Gregory Allen out of the race.

If democracy requires "active participation," it's a bit strange that California has implemented a system that pushes so many people away. When Harris won her Senate seat, nearly two million Californians who cast a ballot didn't even bother to vote in that race. When voters are given only two candidates from the same political party, greater numbers of them decide not to make a choice at all.

That's telling. Public narratives about an election's "success" often revolve around voter "participation" but tend to ignore digging in on whether people are actually voting in particular races. Sending in blank ballots may not be active participation, but it avoids embarrassments like 2014's record-low 42.2 percent turnout of registered voters. And that makes it easier for politicians like Levine to convince themselves that Sacramento's actions have the general public's stamp of approval.

Australia has mandatory voting, as do about 30 other countries. But you won't find Australians showing up to the polls to get handed a ballot where nearly all their choices are narrowed down to a single political party. Americans tend to take a very dim view toward countries that force citizens to vote but then don't give them any real choices. North Korea has mandatory voting too, after all.

If candidates can't convince voters even to mail back a sheet of paper, why should we allow them to pretend the public is willing to "participate" in their charade? Americans' right to refuse to vote needs to be preserved precisely because it speaks to the apathy and disenchantment of the electorate.

Voting disclosure: As a Californian I've voted in several races, but skipped several myself, often voting only on ballot initiatives. The last actual human being I cast a vote for was Gary Johnson for president in 2016.