Republicans should think twice before endorsing the dangerous myth that impeachment requires a criminal violation. 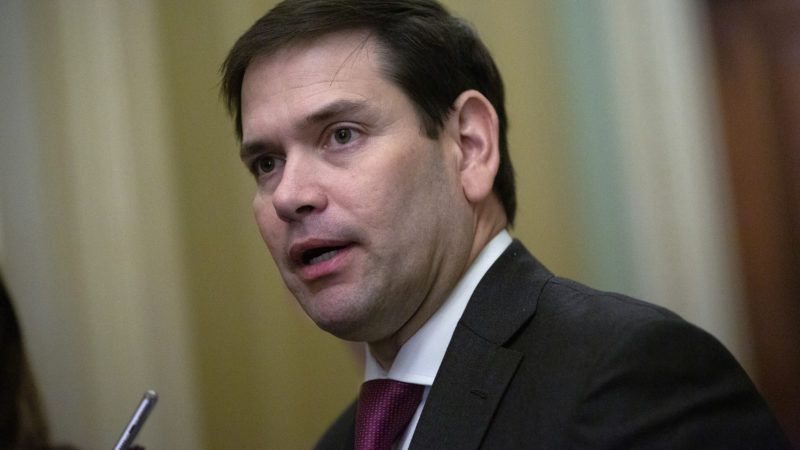 Marco Rubio's widely mocked justification for acquitting Donald Trump, which conspicuously avoided condemning or approving the president's conduct, was not exactly a profile in courage. The Florida Republican nevertheless laid out a defensible position that rejected a dangerously broad claim by Trump's lawyers, and in that respect he set an example his fellow senators should follow if they want to preserve impeachment as a remedy for grave abuses of presidential power.

"Just because actions meet a standard of impeachment does not mean it is in the best interest of the country to remove a President from office," Rubio said. While many of Trump's critics portrayed that line as self-evidently absurd, there is a valid distinction between impeachment and removal, and between the constitutionality and the wisdom of using those powers.

For months, Trump's defenders have been warning us that the promiscuous use of impeachment is a lethal threat to democracy and our constitutional order. Since no Congress has actually removed a president in the 231 years since George Washington started his first term (although Richard Nixon resigned under threat of impeachment), those concerns seem misplaced as a general matter.

If anything, as the Cato Institute's Gene Healy has argued, the impeachment power has been sorely neglected in the face of many abuses that would have justified its use. Still, it is reasonable to wonder whether a hasty, party-line impeachment, followed by a hasty, party-line acquittal, is the best way to invigorate this check on presidential power.

Impeachment has always been and will always be a largely partisan process. But an impeachment cannot be credible if the public believes it is driven solely by political or personal animus.

As someone who does not feel at home in either of the two major parties, I was persuaded that Trump committed a serious abuse of power by pressuring the Ukrainian government to investigate a political rival, partly by withholding congressionally approved military aid. But the House's case, which suffered from an arbitrary, self-imposed deadline, was not strong enough to convince a single Republican that impeachment was warranted.

Since Rubio voted with almost all of his fellow Republicans against hearing witnesses or seeking relevant documents, he could not credibly complain that the evidence was inadequate to prove the allegations against the president. Instead he argued that even if all of the charges were true, they would not justify Trump's removal nine months before he faces re-election, taking into account both "the severity of the wrongdoing alleged" and "the impact removal would have on the nation" given "the bitter divisions and deep polarization our country currently faces."

Notably, Rubio did not agree that Trump's actions vis-à-vis Ukraine were "perfectly appropriate," as the president's lawyers insisted. And he explicitly rejected "the argument that 'Abuse of Power' can never constitute grounds for removal unless a crime or a crime-like action is alleged"—a position at odds with the historical evidence and the scholarly consensus.

Even if you agree with Rubio (and half of your fellow Americans) that Trump's conduct does not justify his removal, you should hesitate before endorsing the idea that impeachment requires a criminal violation or something closely resembling it. There are many ways in which a president can violate the public trust without violating the law.

If "an impeachable offense requires a violation of established law," as Trump's lawyers maintained, Congress would have to tolerate a president who accedes to a foreign invasion, who uses prosecutorial discretion to nullify laws he does not like, who stubbornly stonewalls inquiries into his misconduct, who withholds federal funds to coerce state officials into assisting his re-election, who uses the IRS or the Justice Department to target his enemies, or who pardons himself or his cronies to avoid scandal or criminal liability. Keeping in mind that the White House will not always be occupied by a member of their party, Republicans should think long and hard before they help weave this blanket of presidential impunity.