The tour may be canceled, but the book is benefiting from the controversy. 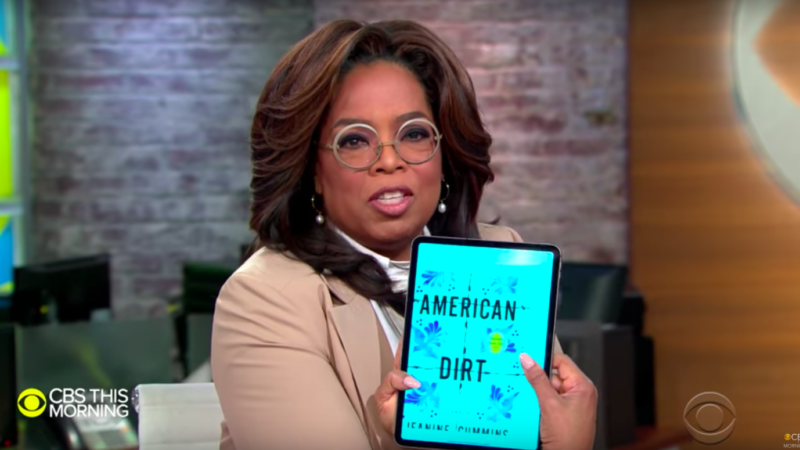 Jeanine Cummins' novel American Dirt depicts the migrant crisis from the perspective of a Mexican woman feeling cartel violence. But the book has so infuriated its target audience—immigration-sympathetic liberals—that its publisher has canceled the rest of Cummins' book tour, ostensibly due to "safety concerns."

The kerfuffle hasn't hurt book sales. On the contrary, American Dirt is expected to debut as a number one fiction bestseller, thanks in part to Oprah's endorsement. Controversies can be very beneficial in the world of publishing, and part of me wonders whether the publisher is overhyping the safety concerns in order to make the book seem more taboo, and thus a must-buy.

That said, it's certainly the case that American Dirt has received tons of negative coverage—not from the sort of Trump-supporting anti-immigrant people who might be expected to object to the story's ideology, but from liberals who think Cummins is engaged in cultural appropriation. Cummins is white—though she has claimed a Puerto Rican grandmother—and stands accused of writing about peoples and cultures to which she does not belong.

"The asymmetry of Cummins's identity (she's white and not an immigrant) and story (a Mexican woman's flight to the United States with her son) has led to charges of racial and cultural appropriation and publishing-industry whitewashing," notes The Atlantic's Randy Boyagoda. "Making matters worse, the novel is a commercial success: It won a seven-figure advance and was optioned for a film adaptation amid broader industry buzz, and it's an Oprah Book Club selection….This is fundamentally a fight about an industry; it's about how book publishers do business, and with whom."

While there are certainly inequities in the world of publishing, it seems unfair to fault the book itself for this. More persuasive are criticisms of Cummins' writing quality, though this line of attack blurs with the others.

"Cummins plops overly-ripe Mexican stereotypes, among them the Latin lover, the suffering mother, and the stoic manchild, into her wannabe realist prose," Myriam Gurba writes in her review. "Toxic heteroromanticism gives the sludge an arc and because the white gaze taints her prose, Cummins positions the United States of America as a magnetic sanctuary, a beacon toward which the story's chronology chugs."

Gurba also balked at Cummins's stated intention, which was to move beyond the portrayal of Mexican migrants as a "faceless brown mass" and instead "give these people a face." The use of the phrase these people was apparently anathema to her.

I'm singling out Gurba's review because it's a good representation: It contains both reasonable criticisms and a blind rage that a white author would dare to write a book about Mexican people—and declare her sympathy for them using language that falls short of what the most woke Latinx activist would prefer.

In any case, the tour might be canceled, but the book is not. If anything, it's benefiting from the controversy.