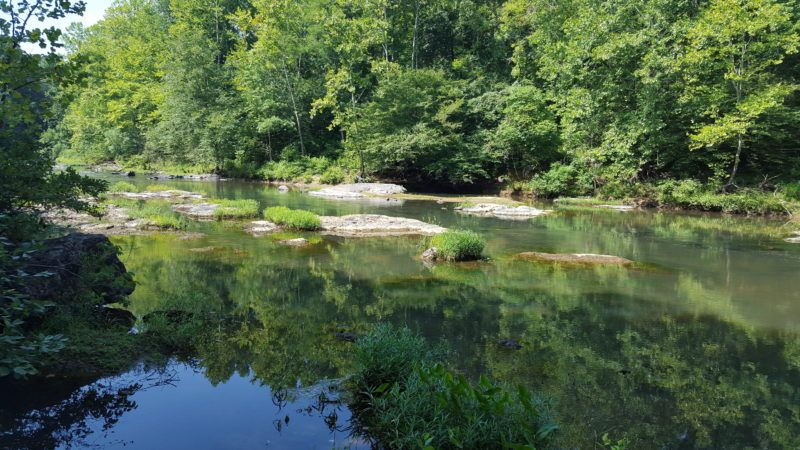 Another day, another barrage of hysterical reactions to a marginal regulatory reform. The latest cause for concern is the White House's finalized clean water rule that renounces the federal government's ability to regulate ponds, puddles, and (some) ditches.

Yesterday's regulation replaces the prior Waters of the United States (WOTUS) rule issued by the Obama administration in 2015. The Obama-era rule was controversial from the get-go, with multiple Red states filing legal challenges claiming it exceeded the federal government's authority to regulate water pollution. A slew of federal court rulings stayed the implementation of the rule in over half the states.

The new rule released yesterday is intended to pare back the federal government's regulatory powers to something closer to what Congress intended when it passed the 1972 Clean Water Act.

"All states have their own protections for waters within their borders, and many regulate more broadly than the federal government," said Environmental Protection Agency (EPA) chief Andy Wheeler at a homebuilding conference in Las Vegas today. Wheeler's department, alongside the Army Corp of Engineers, is responsible for writing and implementing the new clean water rule. "Our new rule recognizes this relationship and strikes the proper balance between Washington, D.C., and the states."

Most media outlets reporting on the rule change went with a different framing.

"This will be the biggest loss of clean water protection the country has ever seen," Southern Environmental Law Center lawyer Blan Holman told the Times.

These articles all note that the new rules would remove federal authority from a huge percentage of streams, ponds, and other waters. That it has that effect is evidence, not of the Trump administration's radicalism, but of the overreaching nature of the previous clean water rules, says Tony Francois, an attorney with the Pacific Legal Foundation.

"It may be factually true that this will regulate a smaller swath of private property," Francois tells Reason, "but the reason for that is what they were doing before is illegal."

Francois and the Pacific Legal Foundation have represented several clients who were hit with EPA lawsuits, fines, and in one case actual prison time for doing things like digging ditches on their own property.

They include Wyoming rancher Andy Johnson, who the EPA sued for millions of dollars after he dug a small pond on his property, and Chantell and Mike Sackett, who've been fighting a 13-year court battle with the EPA over whether they can build a house on a vacant lot they own in an Idaho subdivision.

All of the Pacific Legal Foundation's clients were targeted for violating the less expansive, pre-2015 WOTUS rule.

Legal cases about the limits of what the federal government can regulate under the Clean Water Act stretch back decades. That law, which sets water quality standards and requires those emitting pollutants into regulated waters to obtain an EPA permit, gives the federal government power over the country's "navigable waters."

The law defines those navigable waters rather vaguely as "the waters of the United States." For decades, federal agencies claimed the power to regulate stream beds that were dry most of the year, ponds on private property, and even roadside ditches, all on the theory that these small bodies of water would eventually filter into navigable waterways.

In the 2006 decision Rapanos v. United States, a plurality of the Supreme Court rejected what it saw as the feds' effective claim of authority over all water in the country, instead saying that they could only regulate "relatively permanent, standing or flowing bodies of water" that had a "continuous surface connection" with "waters of the United States."

But because that was only a plurality opinion, with then-Justice Anthony Kennedy writing a concurring opinion saying the federal government had power over anything with a "significant nexus" to a navigable waterway, legal and regulatory disputes over the scope of the Clean Water Act have continued to the present day.

When Obama's EPA issued its 2015 WOTUS rule, it immediately attracted lawsuits, which resulted in federal courts in North Dakota, Texas, Georgia, and Oregon issuing rulings staying the rule's implementation in 27 states. When Trump administration tried to delay implementation of the rule to 2020, the courts slammed that down too, so the rule went into effect in 22 other states. (There's an open question over whether an injunction applies to New Mexico.)

To clear up some of this confusion, the Trump administration announced that it would be rescinding the 2015 WOTUS rule completely and replacing it with its own version. The result, called the Navigable Waters Protection Rule, is what was released yesterday.

The new rule specifically excludes certain types of waters from federal jurisdiction, including streams and pools that flow only as the direct result of precipitation, groundwater, small ditches, water-filled depressions created as part of construction, and waste treatment systems.

Francois calls the new rules a "mixed bag," saying that they "properly remove physically isolated ponds and puddles from federal control" but still leave the EPA "in control of 'streams' that flow as little as a few days a year, in violation of the Clean Water Act and Supreme Court precedent."

But most of the criticism has come from people who say the rules are too weak.

That includes the EPA's Scientific Advisory Board (SAB), which wrote a letter opposing the revised rule when it was first proposed. Science, the board argued, had told them that legal precedent and the Trump administration's statutory interpretation were wrong:

It was made clear that the EPA has chosen to interpret the [Clean Water Act] and subsequent case law as constraining them to limiting the definition of WOTUS to the language of the proposed rule. The SAB acts under no such constraint to give deference to shifting legal opinions in its advisory capacity and is in fact obligated by statute to communicate the best scientific consensus on this topic.

The trouble with arguments like this is that the proper interpretation of the Clean Water Act is not a scientific question.

The idea of a clear bright line distinguishing navigable waterways (or something with a "significant nexus" to a navigable waterway) is "somewhat nonsense" from a scientific point of view, Peter Van Doren of the Cato Institute said on a recent episode of Free Thoughts.

"Everything you put into some small thing eventually, through the filtration of groundwater, probably ends up eventually somewhere in a navigable water," Van Doren said. "But everyone realizes that the writers of the [Clean Water Act] probably did not want the feds to have regulatory authority over everything. So this ends up not being a scientific decision but a policy wrestling match."

Predictably, the administration's attempt to put at least some limits on the feds' regulatory authority is being treated not as a position in a policy wresting match, but as a broadside against science and clean water.

The new rule will go into effect 60 days after it is published in the Federal Register.