New proposed regulations from the White House's Council on Environmental Quality would limit how long federal environmental reviews could last. 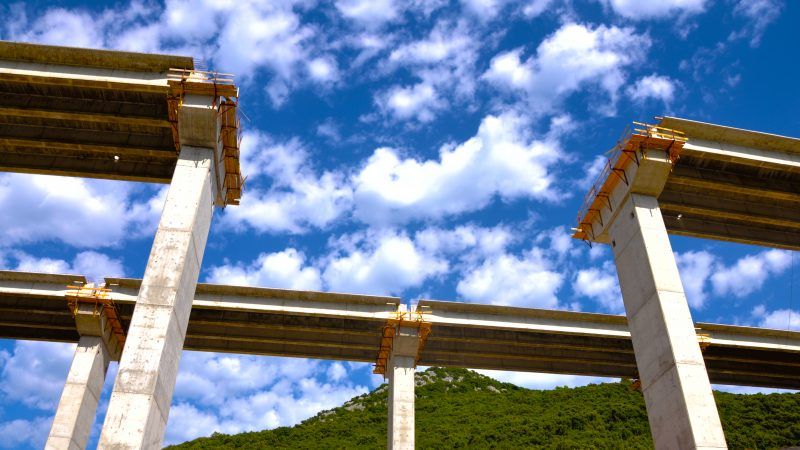 That $1.5 trillion infrastructure proposal President Donald Trump had floated early in his presidency never quite came to fruition, but his latest deregulation drive might mean what money the government does spend on roads and bridges will go a little further.

The president is proposing to speed up and simplify the federal government's environmental review procedures in order to expedite the delivery of new highways, bridges, transit projects, and pipelines.

"America's most critical infrastructure projects have been tied up and bogged down by an outrageously slow and burdensome federal approval process," said Trump at a press conference last week. "The builders are not happy. Nobody is happy. It takes 20 years. It takes 30 years. It takes numbers that nobody would even believe."

His administration's solution is to rewrite the regulations that implement the National Environmental Policy Act (NEPA). That law, passed in 1969, requires federal agencies to assess the impact of their actions on the environment—whether that's building a new highway or issuing permits for a new coal mine—by preparing lengthy environmental reports.

These reports help to identify and mitigate the environmental impacts of major infrastructure investments. They also add a lot of time to the completion of those projects.

The White House's Council of Environmental Quality (CEQ)—which oversees the implementation of NEPA, and which wrote the new proposed Trump administration rules—reports that the average Environmental Impact Statement (EIS) take 4.5 years on average. That's up from 2.2 years in the 1970s, according to a 2018 Heritage Foundation study.

Despite federal regulations that specify final EISs should be no longer than 300 pages unless a project is "of unusual scope or complexity," CEQ found that the average EIS was 669 pages long, and that a quarter of these documents were 729 pages or longer.

These statements are the most involved form of environmental review required by NEPA, and apply to about 170 major projects each year. Another 10,000 projects or proposed federal actions must go through a less onerous Environmental Assessment (EA) process each year. Federal agencies also issue roughly 100,000 categorical exemptions to NEPA each year for minor projects and agency actions.

Two major factors are responsible for dragging out the environmental reviews required by NEPA, says Baruch Feigenbaum, a transportation researcher at the Reason Foundation (which publishes this website).

Some projects require NEPA review from multiple agencies, which often must be performed consecutively.

"Each agency has to do a separate review and in most cases one had to finish a review before another one could start it," says Feigenbaum. "Even if each one took three or six months to review, you put that together and that's potentially two years of time."

Another factor is that current NEPA regulations lack definitive timelines for when reviews have to be completed, meaning project opponents can drag out the process with public comments and litigation.

"They can try to run out the clock forever for years by filing ridiculous lawsuits that have nothing to do with environmental protection," he says.

The longer projects spend waiting for approval, the more their costs are driven up by inflation, says Feigenbaum.

To speed up the NEPA process, the Trump administration is proposing a couple fixes.

The Washington Post reports that the new rules would prevent groups who do not participate in public comment period on environmental impact statements from then raising objections in litigation, and that projects with minimal government funding would not have to undergo a full EIS.

In addition, the new rules would require that when multiple agencies are required to weigh in on a project, these agencies produce a single EIS or EA when practical.

Labor and business groups are in favor of the new changes, with both North America's Building Trades Unions and the National Association of Manufacturers giving glowing quotes about the new rules to the Post.

"Limiting the timeline is really important just to make sure these things don't get run out forever," he says, adding that the restrictions on who can sue over a project help create a "higher bar for those who are legitimately interested" in protecting the environment.

"The government will have an easier time letting dirty industry tear down trees, put up refineries next to children's schools, and risk our health," said Stephen Schima, senior legislative counsel with Earthjustice, saying the proposal would silence "the people living on the front lines of the climate crisis."

Perhaps most controversially, the proposed rules would limit federal agencies' responsibility to evaluate a project's effect on climate change by not requiring them to evaluate environmental impacts that "are remote in time, geographically remote, or the product of a lengthy causal chain."

Climate change should be some part of the government's environmental analysis of projects, says Feigenbaum. On balance, he says, the new proposed rules offer a marginal improvement on the status quo.

"Transportation projects are complicated and the environmental review is one part of it," he says. But "infrastructure projects will be somewhat faster and somewhat cheaper."