The label changes include new font along with pointless and misleading information. 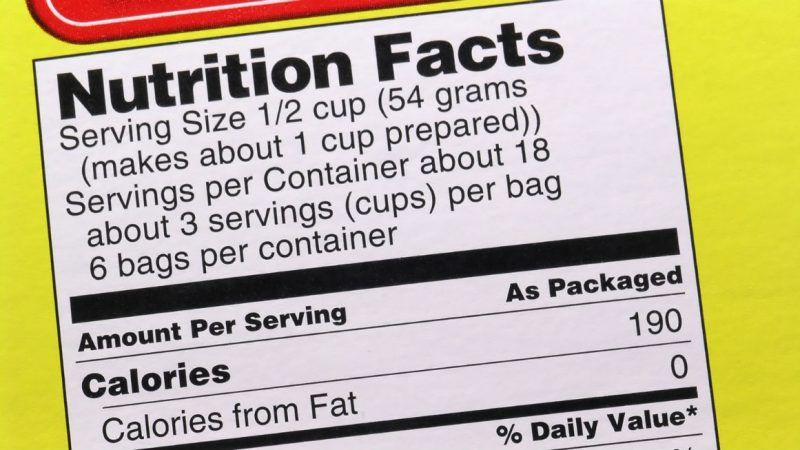 Hours before Americans began raising champagne flutes and toasting the arrival of the New Year, the U.S. Food and Drug Administration (FDA) announced its final guidance for food-labeling regulations that manufacturers that must comply with.

The agency's timing for the announcement, which centers on changes to the mandatory Nutrition Facts label that appears on virtually all packaged foods regulated by the FDA, wasn't great. First, it makes the classic Friday news dump seem rather ostentatious, given the FDA released the guidance on New Year's Eve eve. Food executives who were spending time with their families or in line at the liquor store probably missed the guidance—which appeared in the Federal Register on New Year's Eve itself. Add to that the fact the regulations the FDA's guidance is intended to explain took effect on January 1—mere hours after the agency released that guidance.

The timing has meant grocers such as Whole Foods and PCC (a co-op in Seattle, where I live) have been scrambling to explain the changes to their customers.

Still, though the timing of the guidance is inopportune, it would be unfair to characterize it as some sort of FDA "gotcha" targeting the food industry. The rules apply right now only to very large food producers—those with at least $10 million in annual food sales. What's more, the agency is giving food manufacturers six months to come into compliance with the rules. And, according to the FDA Law Blog, last week's agency guidance differs only slightly from an earlier draft guidance.

But the tardiness of the FDA's guidance is hardly the only knock against the new rules. In fact, it's not even among my chief complaints.

If the old "Nutrition Facts" label wasn't great, then the revised label is hardly an improvement. Visually, it moves some things around and plays with fonts and bold text. As Today.com explains, the new label displays caloric information "in a larger font size[,] and the numbers will be bolder."

Does a little bold text here and a slightly larger font matter? Probably not. A study I cite here found that only 9 percent of consumers read calorie counts on food labels.

My real complaints, though, concern the substance of the label itself.

For one thing, the "facts" the Nutrition Facts label rests upon might more properly be dubbed the Nutrition Opinions label. After all, the Nutrition Facts label reflects the opinions and recommendations of a federal panel of dietary and nutrition experts. As with the current revision—but unlike actual facts pertaining to human nutrition—that label changes from time to time. Perhaps most importantly, the dietary and nutrition experts' recommendations, as I've explained, rests on shaky ground.

Much has been made of changes to the recommended serving sizes of various foods that appear on the Nutrition Fact label. While serving sizes that reflect the quantities a person actually eats in one sitting make sense logically—a serving size of ice cream, for example, jumped under the new rules from a paltry half cup to a more robust three-quarters of a cup—I'm not sure if the new label requirements add any clarity here. After all, these numbers are averages at best. What's more, the agency's new reference amounts for breakfast cereals, for example, suggest a serving size of 20 grams for children ages 1-3 but anywhere between 15 grams and 60 grams for adults.

I'm not sure that makes sense. Then again, this is the same agency that issued a 36-page guidance document in 2018 that contains the words "Serving Size for Breath Mints" in its title.

Finally, some supporters of the revised labels argue that the push to list "added sugar" on the Nutrition Facts label will lead food manufacturers to reduce the amount of sugar they add to foods—in response to consumer demands spurred by the revised label.

It might do that. (Consumers were already angling to consume less sugar before the label change.) But the label will most definitely mislead and confuse consumers greatly. That's because the "added sugar" requirement, I wrote in 2016, "creates a deceptive health halo around products like orange juice and apple juice, which are high in naturally occurring sugar but [often] contain no added sugar."

According to the FDA, the new Nutrition Facts label is intended to help consumers make more informed choices and to combat obesity and heart disease. That's a pipe dream. A 2012 study by E.U. researchers found "no real-life evidence exists linking nutrition label use with measured changes in body weight." Instead, the authors determined that "price, taste, convenience, and shopping habits are simply far more important than nutrition information when making food purchasing decisions."

Ultimately, the very small subset of eaters who focus on the minutiae of nutrition data on food labels may be the only ones excited by or capitalizing on them. Years from now, when those same people propose yet another revision to the Nutrition Facts label—this time we'll get it right—please greet them with the skepticism they deserve.