The judge said six months in jail for the cop's perjury would be "unduly harsh." 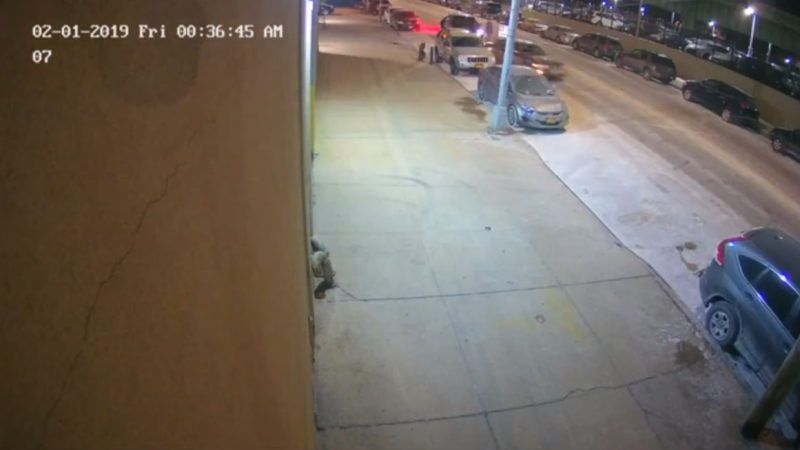 Michael Bergmann of the New York Police Department (NYPD) testified that Pedro Barbosa intentionally attempted to run him over with his vehicle. Barbosa faced a minimum of 15 years in prison if convicted. When video surveillance didn't match the officer's story, Bergmann was indicted for perjury. This week, a judge sentenced him to one day in jail and four years probation.

The Washington Post reports that Barbosa has struggled with drugs; thanks to a series of possession arrests, he lost his job, his ability to pay child support, and, finally, his driver's license. In a low moment, Barbosa stole rolls of quarters to purchase drugs. Bergmann and Barbosa were well-acquainted with each other, and a contentious relationship grew out of Bergmann's rather obsessive desire to get Barbosa off the streets.

Scott Hechinger, senior attorney at the Brooklyn Defender Services and Barbosa's public defender, says Bergmann followed Barbosa around and stopped him multiple times in an effort to implicate him in a crime. Bergmann was unsuccessful each time.

Their paths crossed once again after midnight on February 1, 2019. When Barbosa parked his car on the street, Bergmann and an unnamed NYPD officer pulled up beside him, knowing he had a suspended license. Barbosa recognized Bergmann and drove off.

Bergmann's version of events is more dramatized. In his story, he and his partner exited their SUV. Barbosa then allegedly reversed his car quickly, purposefully positioned the car where Bergmann was between the headlights, and slammed on the gas to try to run him over. Bergmann claimed that he managed to jump out of the way before he was hit, landing on the ground and scratching his elbow.

Bergmann not only included this tale in his police report but swore before a jury that his account was true. Painted as a violent offender, Barbosa was convicted of attempted assault in the first degree.

Fortunately for Barbosa, surveillance footage from a mechanic shop captured the interaction.

Here is the video the investigator Julia found that exposed Det. Bergman's lie. Mr. Barbosa parallel parks. Unmarked car pulls up. He drives off. No accelerating back. No aiming car at Bergman (driver's side). No diving out of way. A complete fabrication. pic.twitter.com/aO4crdO4qC

Hechinger wrote a motion to dismiss the charges and sent both the motion and the footage to the prosecutor. "He was speechless," Hechinger recalls. The prosecutor was appalled that Bergmann lied about "something so egregious."

As a result, Bergmann was charged with perjury and pleaded guilty. He was also fired.

This week Judge Danny Chun sentenced Bergmann to a single day in jail, which he has already served, plus four years' probation. Prosecutors initially asked for a sentence of a year in jail. The district attorney's office believed they would have better luck getting Chun to agree to six months in jail. Regardless, Chun considered six months "unduly harsh."

So one day in jail plus probation for a lie that nearly cost a man 15 years of his life. Contrast that with the fate of low-income people trapped behind bars because of expensive pre-trial bail. Though the law considers them innocent until proven guilty, they often spend far more time in jail than Bergmann while waiting for their day in court. In one infamous case, Kalief Browder spent three years in Rikers Island without a trial because his bail was set at an unaffordable $3,000.

"It isn't that I wish greater harshness," Hechinger says. "It's that I wish that the majority of the people coming through the system—mostly poor people, predominantly black and Latino—were treated with the same kind of individualized justice, due process, and care and consideration for their lives that police officers are."

This may be a pattern with Chun. Hechinger has tweeted several examples of the judge sentencing NYPD officers to probation for such offenses as having sex with a teen in exchange for her freedom, shooting a man in the mouth out of jealousy and then tampering with the evidence, and shooting a man who was walking in a stairwell.