“Let’s vote on this and see who is serious about ending forever wars.” 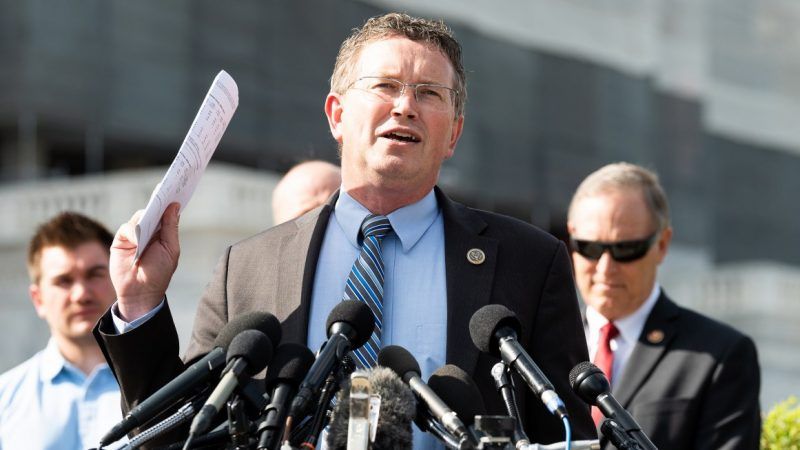 Rep. Thomas Massie (R–Ky.) announced today that he is officially crossing the aisle and co-sponsoring a bill in the House to end military engagements in Iraq.

Massie tweeted that he is signing onto a bill by Rep. Barbara Lee (D–Calif.) repealing the Authorization for Use of Military Force (AUMF) passed by Congress in 2002. The AUMF allowed the military to invade and occupy Iraq and has been used to justify continued involvement there:

I am officially a cosponsor of HR 2456, a one page bill by @RepBarbaraLee to repeal the 2002 AUMF in Iraq. It's past time to bring our troops home from Iraq. Let's vote on this and see who is serious about ending forever wars. pic.twitter.com/qmBeurbFmK

Lee's resolution had 43 listed co-sponsors, all Democrats. Massie appears to be the first Republican to sign on. The resolution, H.R. 2456, simply says, "The Authorization for Use of Military Force Against Iraq Resolution of 2002 (Public Law 107–243; 50 U.S.C. 1541 note) is hereby repealed."

Seriously, read this chunk of text on why we're in Iraq and try to determine anything in this AUMF that actually matches what we're doing today:

There is no item there permitting the president to use Iraq as a staging area to attack Iran.

To the extent the 2002 AUMF allows military actions against other countries, it is limited to those that "planned, authorized, committed, or aided the terrorist attacks that occurred on September 11, 2001." That clause is why Vice President Mike Pence attempted to exaggerate ties between Iran and the 9/11 terrorists as some roundabout way of retroactively justifying the assassination of Iranian Gen. Qassem Soleimani. While several of the 9/11 terrorists did pass through Iran on their way to the United States, the commission that examined the attack found no evidence that the country's leaders were aware of their plans.

Massie has supported Trump's anti-interventionist foreign policy rhetoric, even though Trump's actions have not aligned with what he says. (We are, for example, sending more troops to the Middle East.)

Massie has been very consistent, along with the likes of Sen. Rand Paul (R–Ky.), Sen. Mike Lee (R–Utah), and Rep. Justin Amash (I–Mich.) that it's time to repeal these old AUMFs. Let's see if some other House Republicans follow suit.