Why Is the Chief Justice of Ohio's Supreme Court Lobbying Against Sentencing Reforms?

Justice Maureen O'Connor has intervened repeatedly in the legislative process.

Ohio lawmakers trying to pass sentencing reforms have faced opposition this year from the usual suspects, such as lobbyists for prosecutors and law enforcement. But they've also run into vocal criticism from an unexpected source: Ohio Supreme Court Chief Justice Maureen O'Connor.

It is unusual—and it may damage the objectivity and independence of the court system—for sitting Supreme Court justices to lobby for or against legislation. But that hasn't stopped O'Connor from jumping into the middle of the legislature's deliberations over a pair of criminal justice reform proposals. In newspaper op-eds, public appearances, and letters to members of the state Senate, O'Connor, who happens to be a former prosecutor and lobbyist, has repeatedly argued against a bill that would downgrade some felony drug possession charges to misdemeanor offenses.

O'Connor, of course, has a First Amendment right to speak about legislation and to criticize the legislative process if she wants. But she seems to recognize the unusual nature of her advocacy.

"You may think it unprecedented to receive a letter from me, as Chief Justice, that addresses my concerns about [Senate Bill 3]," O'Connor wrote in a December 3 missive to state legislators, a copy of which was obtained by Reason. But, she adds, it is "my duty" to speak out about issues that "affect the administration of criminal justice and the operation of Ohio's courts." 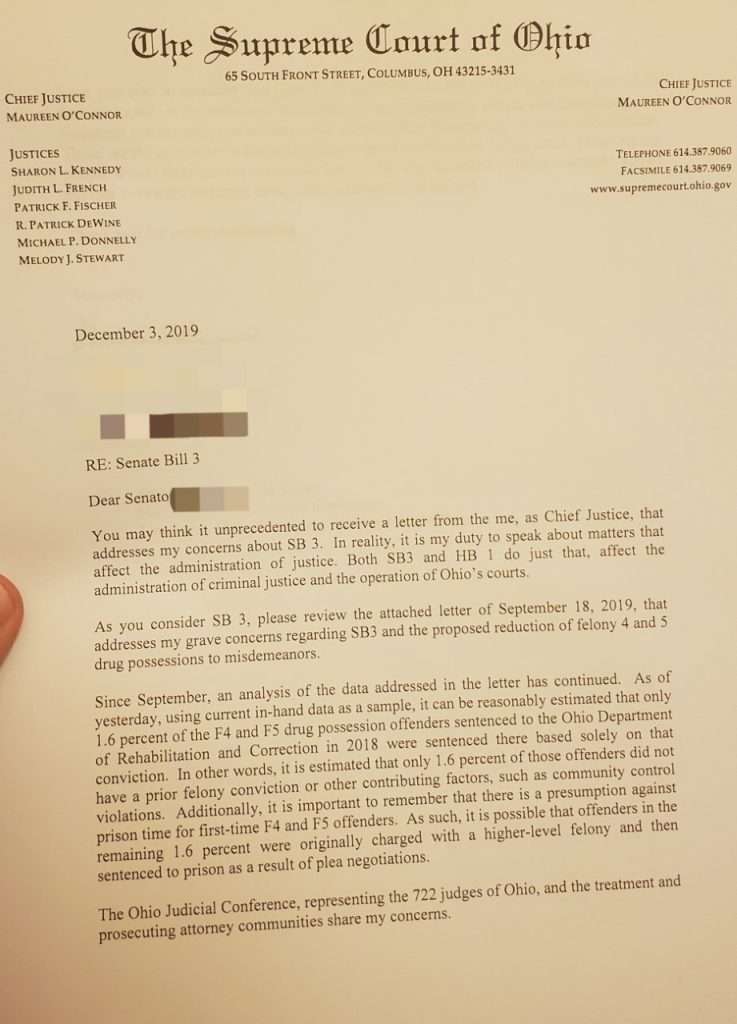 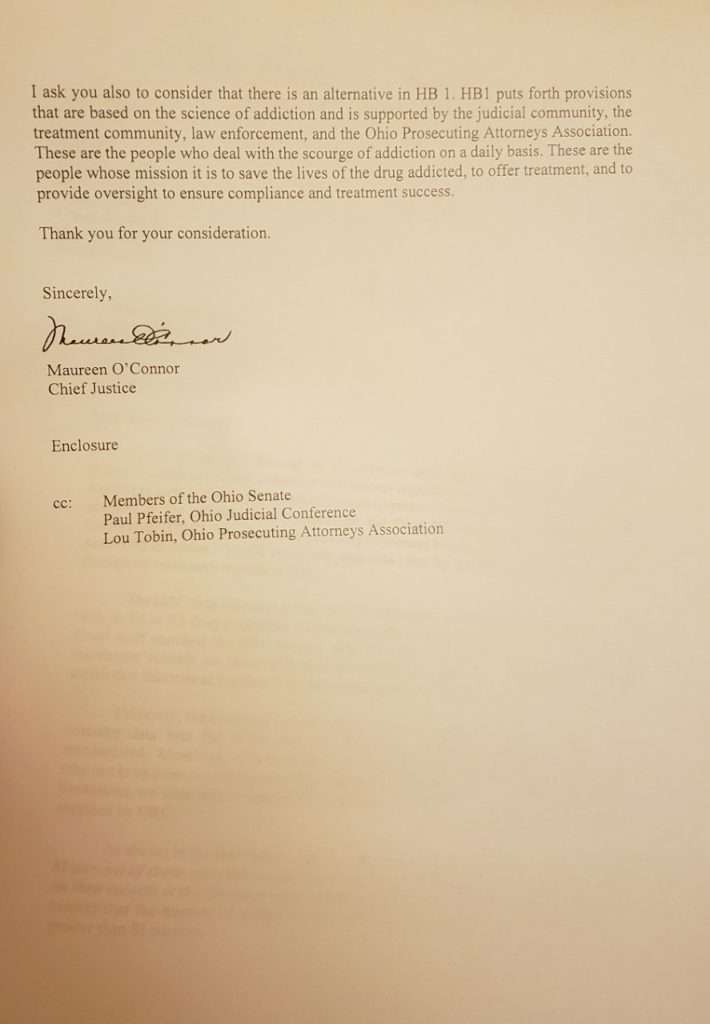 Sen. John Eklund (R–Munson), the sponsor of the bill in question and one of the recipients of O'Connor's letter, agrees that it's unusual to get a letter from a sitting Supreme Court justice advocating against a specific piece of legislation.

Eklund's bill is one of two major criminal justice reform measures that have been jockeying for legislators' support in Columbus this year. He says says it's rooted in the idea that people deserve a chance to prove they can learn from past mistakes.

"We want people to get better and move on to lead productive lives, while also ensuring that traffickers are arrested and stay behind bars," he explains.

One way Eklund's bill would do that is by reclassifying low-level drug possession crimes, which are now charged as felonies in Ohio, as misdemeanors. That would give some individuals convicted of those nonviolent offenses the opportunity to seek treatment rather than being incarcerated, and it would not limit future job prospects in the same way a felony conviction does.

At the same time that she's been lobbying against Senate Bill 3, O'Connor has been pushing the legislature to approve the other criminal justice bill it was considering this year: House Bill 1. In her December 3 letter, O'Connor highlights the House bill's support from law enforcement groups—she specifically name-checks the Ohio Prosecuting Attorneys Association—as a reason to prefer it to the Senate proposal.

"Downgrading the underlying offenses will only reduce one of these incentives and the likelihood of a lasting recovery," the chief justice wrote in a September 19 letter to Eklund.

There's no law or rule that says judges can't lobby for legislation. Indeed, Jonas Anderson, a professor of law at American University who has written about judicial ethics and lobbying, points out that there are times when judicial input can offer important information to legislators, particularly when they can provide technical information about the workings or needs of the justice system.

But judges should be careful about crossing the line into pushing or opposing specific policies, he adds.

"We think of the judicial system as a place where you can get a decision about a dispute that's free from political considerations," says Anderson.

In lobbying against Senate Bill 3, O'Connor has indeed made some technical arguments about how the court system would operate under the new sentencing guidelines proposed by the law. But her objections are overwhelmingly directed at the underlying policy.

In that September 19 letter to Eklund, for example, O'Connor spends two pages arguing that 81 percent of Ohioans sentenced to prison for low-level drug offenses last year had prior criminal convictions and therefore would not be eligible for the treatment programs Eklund is proposing to use as an alternative to jail time. (Of course that means 19 percent of those offenders—more than 300 people, by O'Connor's own count—would stand to benefit.)

That argument, like the one she makes about what steps are necessary to get drug offenders into treatment programs, are not dispassionate analyses of the workings of the judicial system—such as, for example, informing lawmakers about how a policy change might affect judges' workloads. Instead, they are fundamentally prescriptive arguments rooted in policy preferences.

O'Connor has a long history in Ohio politics, both behind the bench and as a lobbyist. It's that career that might best explain her involvement in the debate over sentencing reform.

Before becoming the first female chief justice in the state's history, O'Connor was a magistrate and then a judge for the state's Court of Common Pleas. She resigned from the bench in 1993 to become a prosecutor in Summit County. There, according to her official state Supreme Court bio, she "aggressively prosecuted repeat offenders, violent criminals, and public officials who committed ethical violations or improprieties, and lobbied the General Assembly for tougher laws on rape and gang-related offences." She won accolades from Mothers Against Drunk Driving and other victims' rights groups that advocate for harsher penalties within the criminal justice system. From there, she was elected as lieutenant governor in 1998.

O'Connor returned to judicial work in 2003 after being elected to the state Supreme Court the previous year. She was elected as the court's chief justice in 2010, and re-elected to a second term in that position in 2016. O'Connor, who is 68, will be forced to retire when her current term expires in 2022 under Ohio's law prohibiting judges from running for re-election if they are over 70.

After a career defined by criss-crossing the dividing lines between branches of government—and by advocating for tougher criminal justice legislation both from inside the executive branch and as an outside lobbyist—O'Connor apparently thinks it appropriate to tell state lawmakers what to do. Indeed, this is not the first time she's tried to stamp out sentencing reforms. In 2018, she penned op-eds telling voters to oppose a ballot measure that would have reduced drug possession penalties in order to keep low-level nonviolent offenders out of the prison system. Passage of the measure would be "catastrophic" for Ohio, she wrote. Not exactly the sort of dispassionate analysis one would hope to read from the head of the state's highest court.

Voters listened, and they defeated that proposal at the ballot box last year.

As 2019 drew to a close, O'Connor has amplified her opposition to SB 3. Two weeks ago, she authored an op-ed arguing that transforming some drug possession felonies into misdemeanors "would be a serious mistake." She has used speaking appearances at legal forums to litigate her opposition to the sentencing reforms included in SB 3.

Despite a flurry of legislative activity in December, state lawmakers ultimately punted consideration of SB 3 until next year.

By using her authority as the state's top jurist to parrot talking points from prosecutors and law enforcement lobbyists, O'Connor may yet succeed in stomping criminal justice reform efforts, but she also undermines her own credibility and that of the state's court system. The legitimacy of the judiciary survives largely because the system is perceived to be separate from the political machinations that go on within a legislature. O'Connor's willingness to use her judicial position to help shape policy should make Ohioans wonder about her ability to be an objective arbiter.

"Judges shouldn't be muzzled," says Anderson, "but lobbying as a judge—not as an individual, but as a judge—risks the independence and objectivity of the judicial branch."