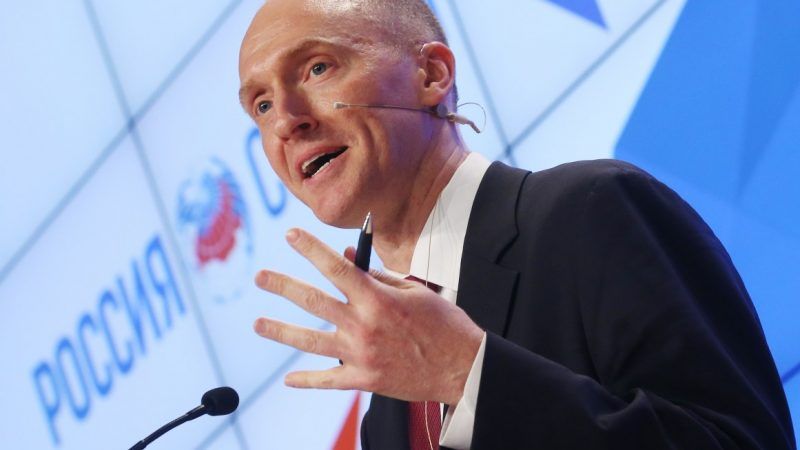 According to a massive report that the Department of Justice's Office of the Inspector General released today, the FBI's investigation of the 2016 Trump campaign's possible connections with the Russian government was justified and not driven by political bias—but it was full of blunders and bad omissions.

The report analyzes the circumstances under which the FBI asked the Foreign Intelligence Surveillance Amendment (FISA) courts for permission to secretly wiretap Carter Page, a foreign policy advisor in Trump's campaign. FBI officials were concerned Page might be compromised or working as a foreign agent, and they sought and received permission to wiretap him, permission they renewed three times.

But did anti-Trump bias cloud the attitudes of the officials involved in the decision to open the investigation? Text messages between former FBI lawyer Lisa Page and FBI agent Peter Strzok fueled "deep state" theories claiming that the investigation was launched in order to take Trump down. Their requests to the FISA court relied partly on a dossier alleging that Russian officials had compromising info on Trump—a dossier the former British spy Christopher Steele had developed as a political weapon. That raised the question of whether the FISA court had received adequate explanation about the dossier's roots and credibility.

After a lengthy investigation involving more than 170 interviews with more than 100 witnesses, the Office of the Inspector General has concluded that the decisions to open an investigation and to request renewals of the warrants were not driven by a bias against Trump. But it did not conclude that everything the FBI did was fine. According to the report, the FBI was not as thorough and as accurate as it needed to be as it was requesting permission to wiretap Page:

Our review found that FBI personnel fell far short of the requirement in FBI policy that they ensure that all factual statements in a FISA application are "scrupulously accurate." We identified multiple instances in which factual assertions relied upon in the first FISA application were inaccurate, incomplete, or unsupported by appropriate documentation, based upon information the FBI had in its possession at the time the application was filed.

The IG office found seven problems with the very first FISA warrant application. These included: leaving out the fact that Page in the past had provided the FBI with information about his contacts with Russian intelligence officers; overstating the degree that Steele's prior reporting had been used in criminal proceedings; omitting information from Steele himself that one of his sources was prone to boasting and may have some credibility issues; incorrectly claiming that Steele wasn't the source of a leak of his information to Yahoo News; and even omitting some comments from consensual interviews with Page where he denied having met certain Russian officials. These errors were not corrected in the renewal applications.

The IG report notes that the FBI was unable to corroborate any of the information about Page that was in the Steele report, even as they kept seeking renewal of the wiretapping. Page has not been charged with any crimes.

The subsequent warrant applications added 10 more errors or omissions to the inspector general's list, including a failure to inform the FISA court that Steele's reporting was also going to Hillary Clinton's presidential campaign and or to make sure the court knew that Steele had been described as "desperate that Donald Trump not get elected."

The report also heavily criticizes Justice Department attorney Bruce Ohr, who met with Steele, the FBI, and the State Department and discussed the contents of Steele's dossier. Ohr did not inform his supervisors that he was connected to the information, even though those supervisors were among those who signed off on the FISA warrant requests, and even though Ohr was the one who knew that Steele was heavily against a Trump victory. But while the report concludes that Ohr made some serious errors in judgment, he did not violate specific department policies. It does not recommend any charges against Ohr or anybody else, but does recommend that Ohr's supervisors in the Criminal Division review the findings about Ohr's performance for "any action they deem appropriate." That's a recommendation for possible discipline, but not criminal charges.

So altogether, the inspector general found 17 incidents of "serious performance failures by the supervisory and non-supervisory agents with responsibility over the FISA applications." But no political bias!

Both sides of the effort to impeach Trump can conceivably claim victory here, which essentially means that both sides lose. One side will be able to argue that the FBI has been cleared of any claims of bias. The other side will be able to argue that there's plenty of evidence of the FBI playing fast and loose when requesting permission to snoop on a political campaign, deliberately withholding information the FISA court would want to know.

For the rest of us, what's most important and troubling here is what the report says about how the FBI operates. It's important not to fall for a false choice here. It's OK to believe that Trump's behavior was profoundly corrupt and also to be deeply concerned that the FBI cut far too many corners when it sought permission to secretly snoop on an American citizen. The only reason we know this much information about the investigation is because it was connected to Trump's political campaign. What we don't know—and maybe will never know—is how frequently the FBI omits important information in other wiretap requests that involve Americans.