"You don't like the building? You think it's old and decaying? Then get out there and push to get a new one," she said. 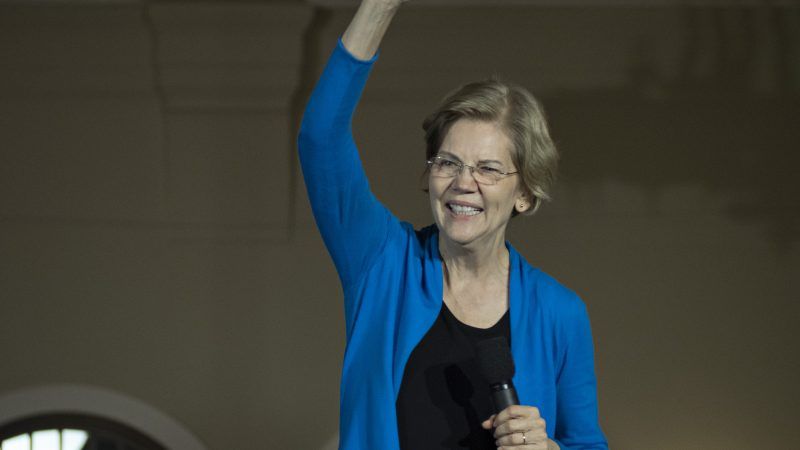 Sen. Elizabeth Warren (D–Mass.) has a plan for public education, and it starts with parents.

"If you think your public school is not working, then go help your public school," she told the National Education Association (NEA) as she touted her stance against charters. "Go help get more resources for [your public school]. Volunteer at your public school. Help get the teachers and school bus drivers and cafeteria workers and the custodial staff and the support staff, help get them some support so they can do the work that needs to be done. You don't like the building? You think it's old and decaying? Then get out there and push to get a new one."

How she expects parents to do this—particularly the poorer ones she says she wants to help—remains unclear.

In recent years, the Democratic presidential candidate has doubled down against charter schools. She adopted the stance in 2016, when (in her words) "a handful of bazillionaires" attempted to lift the cap on charters in Massachusetts. But Warren found herself in hot water last month, just a week after her NEA interview was released, when she was caught speaking misleadingly to a group of black protesters from the Powerful Parent Network, an organization that supports school choice.

"My children went to public schools," she said, pushing back against accusations that she doesn't practice what she preaches. But her children didn't only go to public schools: As Reason Foundation's Corey DeAngelis discovered, she sent her son, Alex, to a private school from fifth grade onward.

"There's no reason poor families should be forced to keep their children in failing schools," DeAngelis tells me. "Let's be clear: It's the schools that are failing the families, not the other way around."

Warren's position relies largely on the notion that charters are robbing public schools of their rightful inheritance. "Public dollars must stay in public schools," she told the NEA. But as I've noted before, that dichotomy is fictional. All charter schools are public schools. Not only that, they're also cheaper, and they do more with what they're given: Charters receive 27 percent less funding per pupil, yet somehow do more with those dollars.

What's more, charters help the very populations that Warren insinuates they are leaving behind. And it's inconvenient that she represents Massachusetts, because the positive effects of charters couldn't be more clear in the Bay State. As Jonathan Chait notes at New York:

Boston has probably the most effective public charter schools in America, producing enormous learning gains for the most disadvantaged children. "Charter schools in the urban areas of Massachusetts have large, positive effects on educational outcomes," reported a Brookings study. "The effects are particularly large for disadvantaged students, English learners, special education students, and children who enter charters with low test scores." Researchers have asked and answered every possible objection: Boston's charters are not "skimming" the best students, they do scale up, and they do not harm students left behind in traditional public schools. (Indeed, "charter expansion has a small positive effect on non-charter students' achievement.")

The majority of Hispanic Democrats (52 percent) and Black Democrats (58 percent) hold favorable opinions of school choice. Yet charter schools have moved from a relatively bipartisan issue to a polarizing one. Warren's comments about her fight against charter expansion lend some insight into why that has happened: "I'm proud of where the union was." This is less about helping vulnerable communities and more about retaining her strong support from teachers unions, which worry that charters will siphon off their members.

Warren isn't wrong on her diagnosis of the overall problem. "Assigning children to schools by zip code, and doing funding by zip code, means that our public schools are very uneven," she told the NEA. That's certainly the issue at stake. But it's one that charter schools can help address.