California Regulators Shut Down a Distillery for Serving Alcohol 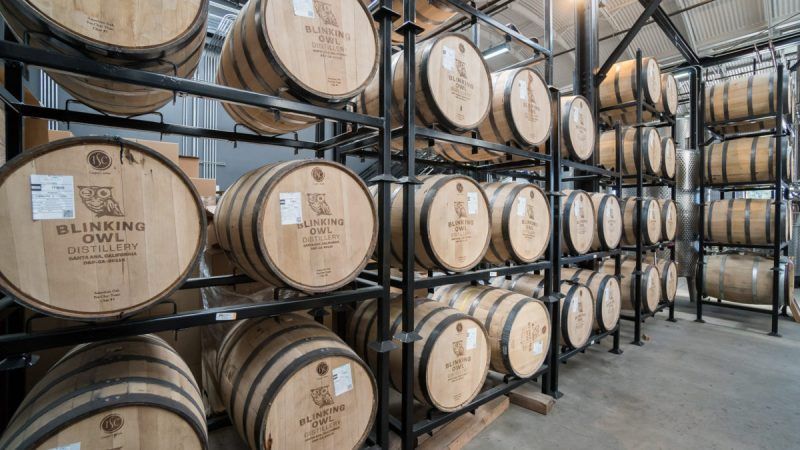 Further down the homepage, the distillery— which holds a California craft distiller's license, known as a Type 74 license in state regulatory parlance—goes into great detail about the saga behind the temporary closure, which appeared to result from little else than confusing regulations and inconsistent instructions from regulators.

"While Type 74 license states that distilleries can only serve up to 1.5 oz. of alcohol per person per day, we are allowed to have private events, in which the drink restriction is waived," Blinking Owl explains. "It is under this section of code which many small distilleries in the state have found a much-needed revenue source by hosting private events or functions. To that end, we segregated private events with wristbands, something we believed the public was accustomed to and well understood the meaning of, and we subsequently operated in a manner we understood to be in complete compliance."

Before making his first undercover visit, according to his account, ABC trade enforcement officer Eric Gray did not speak with anyone at Blinking Owl about being part of a private party. When he arrived at the distillery, he was served one drink and was told Blinking Owl could not serve him another legally. He paid and left.

Before his next visit, Agent Gray called Blinking Owl. He was told this met the requirements for being considered a private party. After arriving at the distillery, Blinking Owl confirmed Gray had called ahead to be placed on a private party guest list and was served a second drink.

It was this second visit that caused Agent Gray to conclude Blinking Owl had violated ABC rules, allegedly "by exceeding the amount of 1.5 ounces of distilled spirits that is permitted to be served per person per day by selling two separate cocktails to Department Agents that contained 1.5 ounce in each drink."

For this purported transgression, the state chose last week to punish Blinking Owl by forcing the distillery to close for 25 days.

Where did Blinking Owl get the idea that a person could be served more than 1.5 ounces if they were to call ahead to be placed on some sort of private party guest list? It may have been from regulators themselves.

It turns out Blinking Owl had previously been cited a year earlier for serving more than 1.5 oz. to one undercover ABC Agent Plotnik. In his report, as evidence in support of his allegations, Plotnik noted he could not have been part of a private party because he had not "called ahead to be placed on a guest list" at the distillery.

I spoke this week by email with Brian Christenson, who—with his wife and a close friend—opened Blinking Owl in 2016.

A frustrated Christenson tells me he and his fellow owners have invested at least $3 million in the distillery. He says the state's "strong Prohibition hangover is pretty shocking in this day and age."

"These laws largely serve no purpose other than to ensnare small business owners and produce fines for agencies that struggle to justify their own existence," Reason subscriber and Blinking Owl supporter Robbie Haglund, who alerted me to the distillery's regulatory woes, told me in an email this week.

Blinking Owl isn't alone in finding fault with the enforcement of California's craft distillery rules. At least one other California distiller I spoke with this week—who did not want me to use their name or that of their distillery for fear of reprisals from state alcohol regulators—say they've been targeted by state regulators in a similar fashion in recent years.

(I reached out to undercover state ABC trade enforcement officer Eric Gray this week by email to ask him about the seemingly subjective nature of the rules he's charged with enforcing—namely the criteria the state ABC uses to determine whether a distillery is holding a permissible private event and/or function or an impermissible one. Agent Gray did not reply.)

"It is our hope that this campaign awakens lawmakers and state officials to realize the absurdity of inflicting a harsh, unjust punishment when it is obvious that we are chasing legal clarification on a vague, undefined section of the law that it is currently based in constant[ly] changing opinion," Christenson tells me.

In the end, Christenson just wants the state to treat Blinking Owl, its employees, and its customers fairly.

"Ultimately we want parity with the wine and beer industries," he tells me, since in California brewery and winery rules are friendlier for businesses and consumers alike. "But in the short term we would like the ability to use our tasting room privileges to serve more and sell more products direct to consumers to create more revenue to help us survive and thrive as a small California business."

I hope he gets his wish. So do others. Christenson tells me Blinking Owl customers and the general public have been incredibly supportive of the distillery.

"The owners of Blinking Owl are some of the nicest, most generous, and honest people I have ever met," Robbie Haglund says. "They are the type of entrepreneurs we need in this country. They care about their business, their employees, their customers, and the community."

Christenson tells me he's spoken with state lawmakers, who he says have been receptive to his complaints and appear optimistic they can engineer a fix.

The will to reform the rules may just be there. As recently as last year, California lawmakers saw fit to ease some of the regulatory burden the state places on small craft distilleries.

Clearly, though, the state still has a long way to go before Blinking Owl and other craft distillers in California will feel like the state isn't rooting for them to fail.