Instead of reducing the dangers posed by criminals, California's gun restrictions have increased the threat posed to decent people by the law itself. 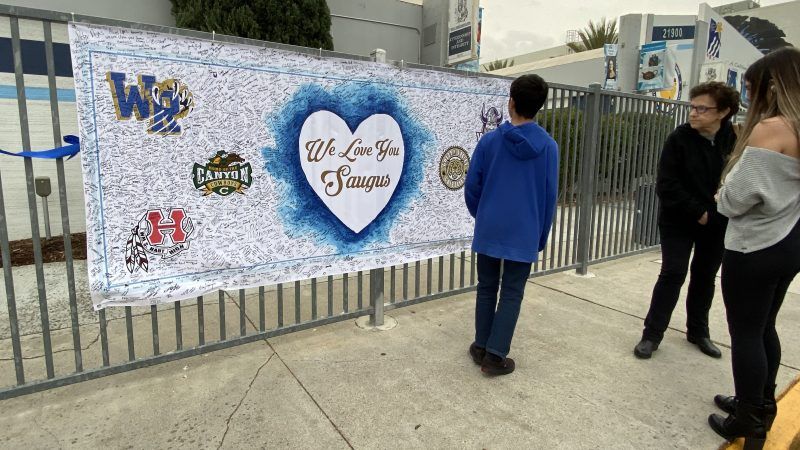 These are dream laws for anti-gunners around the country, and yet they didn't stop Nathaniel Berhow from murdering two people and injuring three others before shooting himself at Saugus High School in Santa Clarita, California, earlier this month. Instead of being stymied by legal restrictions, the killer worked around them.

For starters, Berhow wasn't supposed to have guns, according to the law. As a 16-year-old, he's too young to possess, let alone purchase, handguns in California.

Mark Berhow, the shooter's late father, was a hunter and did own guns, but they were taken away for some reason before the man's death in 2017.

"The father had six guns registered to him," Los Angeles County Sheriff Alex Villanueva says. "Ultimately, at one point, all the weapons were lawfully removed from the home and he became a prohibited possessor. The guns were subsequently destroyed, you know, legally, and he had no access to weapons at that point further."

That is, Berhow senior's guns were taken away just as the state's red flag laws might dictate, although we don't know the specific legal authority or reason for the confiscation. Where, then, did the 1911-style, .45 caliber handgun used by Nathaniel Berhow in his killing spree originate?

"When we did a search of the house, we encountered what's called a 'kit gun,'" Villanueva elaborates. "The weapon used in the homicide was also a 'kit gun.' It was assembled from parts. It had no serial number, so it was what's called a 'ghost gun.'"

"Ghost gun" means a gun that doesn't have a serial number and (presumably) a commercial source. Some are made completely from scratch based on widely available plans. The machinery required for the job is commonly used for all sorts of projects, although CNC machines and 3D printers are making it even easier. Other guns come, as this pistol apparently did, from part kits that can be used to repair or upgrade compatible firearms.

The receiver—the core component that is legally defined as a gun—is regulated at the federal level. But given that there's an inescapable difference between something that is a working firearm and material that might eventually be turned into a working firearm, a line must be drawn somewhere. The Bureau of Alcohol Tobacco and Explosives currently defines that line as 80 percent completion.

"The ATF has long held that items such as receiver blanks, 'castings' or 'machined bodies' in which the fire-control cavity area is completely solid and un-machined have not reached the "stage of manufacture" which would result in the classification of a firearm," the bureau says.

That means people can purchase unfinished 80 percent receivers free of regulation and finish them in their own workshops, which may be how Berhow's pistol was made.

"Kit guns" and "ghost guns" aren't news to California lawmakers; they were subject to background checks and registration in 2016, although that law has, unsurprisingly, proven unenforceable. The state government passed new regulations on them last month. Going forward, gun parts are subject to regulations much as if they were finished firearms. But even gun control advocates concede the law is rather impotent.

"Even after the law goes into effect, preexisting guns without serial numbers will remain hard to trace. And some new guns made from parts will likewise be difficult to trace. Not everyone will apply for a serial number even though it's legally required," James William Gibson complained in the Los Angeles Times. "The people who buy a given model of precursor part but who do not call and get a serial number can be identified, but it will still take time to trace a particular gun."

Additionally, the new law just sidesteps the problem with which the federal ATF has wrestled: Short of regulating all metal and plastic that might be made into a gun, where does the law stop? California legislators targeted "an unfinished receiver" and "an unfinished handgun frame," then kicked the issue over to the bureaucrats, telling them: "The Department of Justice, consistent with this section, shall provide written guidance and pictorial diagrams demonstrating each category of firearm precursor part specified."

Is it a gun? Is it a block of metal? This should be interesting.

At the same time, California implemented a farther-reaching red flag law, intended to deny the legal possession of firearms to those deemed to be potentially dangerous. The original law was already draconian, leaving lawmakers little room to double-down. They did the only thing left to them—they gutted the remains of due process. That prompted the American Civil Liberties Union (ACLU) to object that stripping rights away from the subjects of restraining orders without giving them an opportunity to argue their cases "poses a significant threat to civil liberties."

Remember—the Berhow family's guns were taken away before the new law ever passed. That didn't—couldn't—stop the home manufacture of new guns without regard for the law.

California is running up against a serious and common challenge: Laws are effective at defining the penalties that you'll apply to people who get caught doing something you don't want them to do. But they're not all that effective at changing the behavior of those who are unlikely to be caught, or don't care about consequences. You can pass a legislative wish list and then tighten it forever. Much human conduct will remain beyond reach.

Fortunately, as horrifying as Nathaniel Berhow's crime was, it remains rare in a remarkably safe country. "For the second consecutive year, the estimated number of violent crimes in the nation decreased when compared with the previous year's statistics… In 2018, violent crime was down 3.3 percent from the 2017 number," the FBI noted in September.

Berhow's crime occurred against the backdrop of an America whose people are far less at risk of violence than they were in the past.

That doesn't make the crimes less evil, or the frustrations less immediate—especially for victims and their families. But laws have victims too, as the ACLU points out with regard to California's tightened red flag law. Laws made ever-more draconian in response to crimes that resist efforts at deterrence will inevitably harm the innocent more than they touch the predators. When cops are sent to do the impossible, bad tips are submitted, raids are mistargeted, and lives are ruined or ended.

California has adopted every law gun restrictionists have demanded, but instead of reducing the dangers posed by criminals, it has increased the threat posed to decent people by the law itself.