To his credit, Biden responded by calling for the decriminalization of marijuana and for releasing marijuana prisoners. 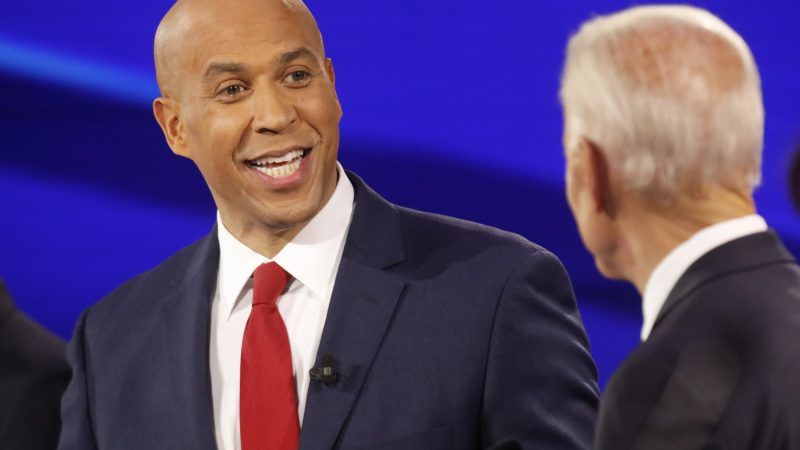 For eight years, former Vice President Joe Biden worked alongside a man who smoked pot as a teenager and then became the President of the United States.

So when Biden says, as he did last week at a town hall in Las Vegas, Nevada, that he's concerned about the dangers of marijuana as a "gateway drug" to harder stuff and wants to take more time to consider whether ending the federal war on marijuana is worth it, you have to wonder what he's smoking. Biden's opinion—one that he repeated during the Democratic primary debate on Wednesday night—is that marijuana legalization should be subject to additional study before it can be enacted at the federal level.

On Wednesday night, Sen. Cory Booker (D–N.J.) took Biden to task for being a squish on marijuana reform.

"I have a lot of respect for [Biden], he swore me into my office, he's a hero. This week I hear him literally say that I don't think we should legalize marijuana," Booker said. "I thought you might have been high when you said it."

Sen. Booker on fmr. VP Biden's recent comments on the legalization of marijuana: "I thought you might have been high when you said it" #DemDebate pic.twitter.com/Yg5k6J3rGE

The zinger was more than just a funny quip. It came during a segment of the debate focused on how the various Democratic candidates could best appeal to African-American voters—a demographic that figures to be critical for Biden, particularly in the early primary in South Carolina.

Booker argued that Biden's tepid stance on marijuana should be disqualifying. Calling the war on drugs "a war on black and brown people," the New Jersey senator pivoted to criticize candidates who have not experienced first hand the devastating consequences of the drug war.

"There are people in Congress right now that admit to smoking marijuana, while our kids are in jail for those drug crimes," Booker said to widespread applause from the Atlanta crowd. For Booker, it was yet another strong debate moment—though good performances in past debates have not helped him rise in the polls.

To his credit, Biden responded by calling for the decriminalization of marijuana and for releasing from people incarcerated for marijuana offenses. That's good.

But it also adds to the notion that, as Reason's Matt Welch has written, Biden is a "rusty weather vane" who can be trusted to eventually point in the direction of the prevailing political winds—but that's hardly leadership. If he were to become president, and Congress put a marijuana legalization bill on his desk, there's a good chance Biden would sign it. But would he lift a finger before then? That's the major concern.

A full two-thirds of Americans now favor legalizing weed, including 76 percent of self-identifying Democrats. More than 80 million Americans live in states with legal recreational marijuana. Earlier on Wednesday, a bill that would decriminalize the possession and use of marijuana passed the House Judiciary Committee with bipartisan support. This is all happening without Biden.

Clinging to disproven fear of marijuana as a "gateway drug" and standing with one foot behind a prohibition that has destroyed lives makes it painfully obvious that Biden is a relic from a bygone era of politics.