California Tried To Fine a Company $10,000 for Ordering Blind People Ubers and Lyfts Without a Permit 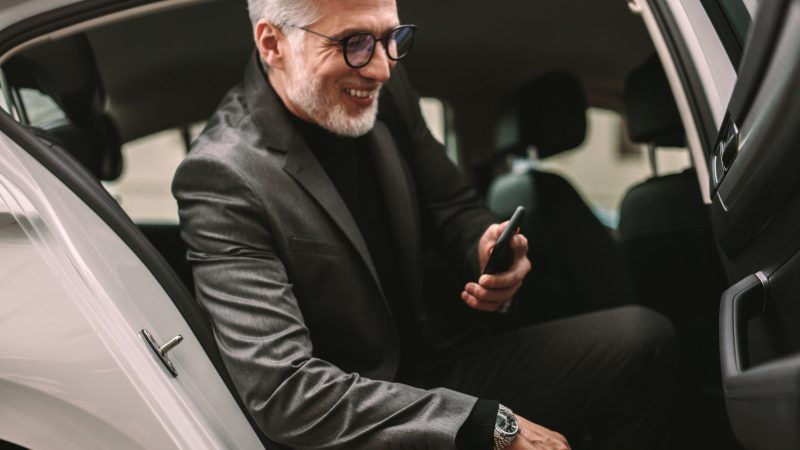 California regulators are trying to crack down on a company that orders Ubers for the blind and elderly.

In February, the Consumer Protection and Enforcement Division (CPED) of the California Public Utilities Commission—the state body that regulates transportation network companies like Uber and Lyft—issued a citation to GoGo Grandparent for operating a for-hire transportation service without permission.

Regulators demanded that the company pay a $10,000 fine and obtain the necessary permit to run a transportation network company, which would involve getting $1 million liability insurance for its vehicles and handing over lists of its drivers to the state.

But GoGo doesn't own any vehicles, and it doesn't contract directly with any drivers.

Instead, for the past four years, the company has been providing a toll-free hotline that customers without a smartphone can call to order an Uber or Lyft ride to their home or another prearranged location. Using customer-provided information, GoGo's software automatically orders a ride, then charges a 27-cent-per-mile fee for its services.

GoGo's service is aimed at elderly and disabled people who either don't have or can't use smartphones. Its novelty and perceived public benefit—improving mobility for seniors—has earned the company coverage from such outlets as The New York Times and TechCrunch.

California law defines a for-hire ride service—referred to as "charter-party carriers"—as any "person engaged in the transportation of persons by motor vehicle for compensation." CPED argues that this applies to GoGo. In regulatory filings, it has used the Merriam-Wester definition of "engaged" as "involved in [the] activity."

The division officially cited GoGo in February. In March, the company filed an appeal, arguing that the regulations it was being asked to comply with were inapplicable to its business model.

"GoGo allows a flip phone to act as a substitute for a smartphone for the rider summoning a ride through a [transportation network company] such as Uber or Lyft," says the appeal, which notes that the company neither employs or contracts with drivers. "For the [Public Utilities Commission] to regulate them would be equivalent to regulating a smartphone or the Google Alexa Device or a computer code."

CPED regulators "are 'engaged' in the transportation of persons by motor vehicle by virtue of this enforcement action and they are compensated for their activity," the judge noted. "This absurd result of relying on its dictionary definition demonstrates the ambiguity of the term 'engaged.'"

The full utility commission still needs to vote to ratify this decision, and the vote keeps getting delayed. The five-member commission was initially supposed to vote to dismiss the citation issued against GoGo in October, but that was moved back to November, and now early December.

A spokesperson for the California Public Utilities Commission told the San Francisco Chronicle that a few delays are pro forma. Not so, says Tom MacBride, GoGo's attorney, who told the paper that multiple delays usually happen only for major commission business, not a minor citation like the one issued against his client. He speculates that CPED staff could be holding up proceedings.

Regardless of what's behind these delays, it's ridiculous that GoGo is in this position in the first place. The company is performing a useful and innovative service by helping seniors to make use of technology that might otherwise have left them behind. For their trouble, they've been beset by dictionary-quoting regulators who are stretching state law to penalize the company.