"It's horrific. Men with badges and guns should not be acting this way." 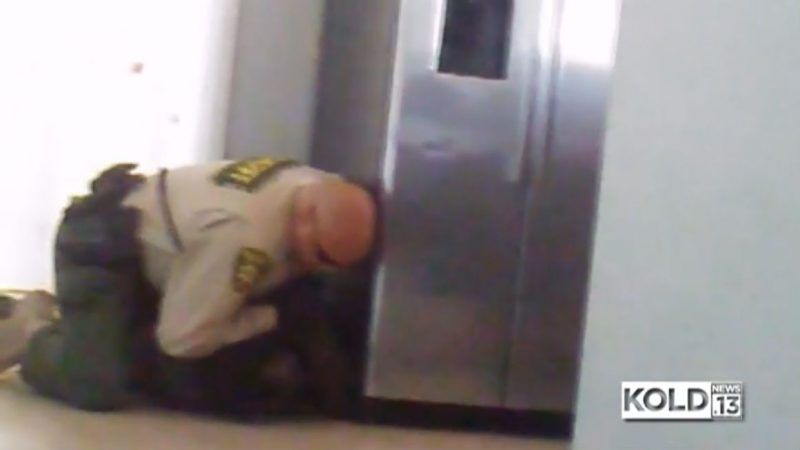 A disturbing video shows an Arizona sheriff's deputy wrestling a quadruple amputee, age 15, just before arresting both the young man and the 16-year-old who recorded the incident.

Joel Feinman is head of the Pima County public defender's office, which represented both of the teens arrested in the September incident. According to Feinman, the Pima County Sheriff's Department was responding to a disorderly conduct call at a group home. The amputee, who had been abandoned by his parents, had knocked over a trash can and was yelling; Feinman says he was acting out because he wanted to return to school.

The video, which Feinman's office provided to the local TV channel KOLD, shows a deputy pinning the teen to the ground, first with his body and then with his arm. The amputee screams for the deputy to get off, and the deputy eventually lets him go. After righting himself, the deputy asks the teen what his "problem" is. The teen replies that he didn't have one and that the only thing he did was knock the trash over.

While the deputy expresses his frustration at the teen's decision to continue to move, the teen asks him to lower his voice. The deputy bends over the teen and shouts, "I will raise my voice whenever the fuck I want!"

At this moment, the teen behind the camera intervenes, telling the deputy that the teen on the ground has already answered the question.

The deputy redirects his ire and says, "Shut the hell up! Are you involved in this?"

The deputy tells the second teen to go to his room. The teen says he's not allowed. The deputy then approaches him and asks him multiple times, "Am I talking to you?" The second teen responds that he "doesn't care" who the deputy is addressing.

The deputy exits the space briefly, and the second teen hands the camera to someone else. The recording continues long enough to capture two deputies placing handcuffs on the second teen. At one point, the deputies slam his head against the wall. He is then escorted outside.

Both young men were charged with disorderly conduct. On Thursday, the county attorney's office informed Feinman that the charges had been dismissed.

The sheriff's department Code of Conduct requires all its employees to "bear in mind that persons having business with the Sheriff's Department are entitled to courteous and respectful consideration. Department members shall perform their duties efficiently and completely, avoiding harsh, violent, profane, or insolent language, and shall remain calm regardless of provocation."

The department did not respond to a request for comment in a timely manner. It also has not released a statement on its website or social media feeds as of the time of this reporting. It did, however, tell KOLD that it would be conducting an internal investigation. It had not seen the video before KOLD approached them for comment.