When the Government Creates Mandatory Shortages 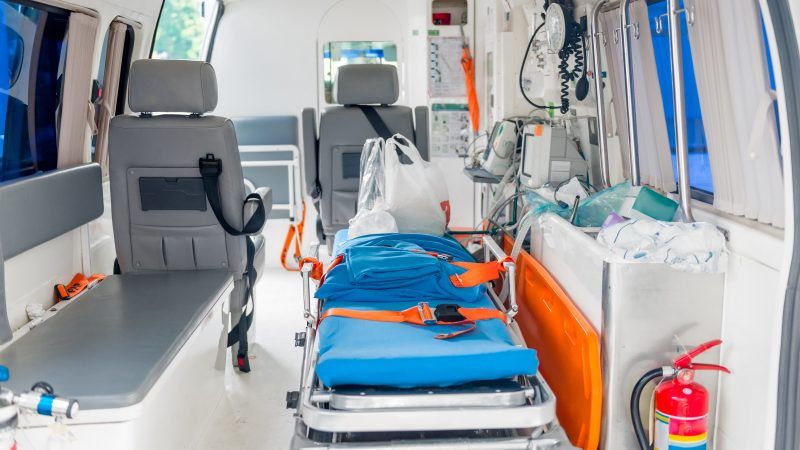 Governments create problems. Then they complain about them.

"Six-year-old Kyler Truesdell fell off his motorcycle," reported Channel 12 news. "The local hospital told (his mother) he should be transported to Cincinnati Children's to check for internal injuries." But there was no ambulance available. Kyler had to wait two hours.

Yet Kyler's cousin, Hannah Howe, runs an ambulance service in Ohio, just a few minutes away. "We would've (taken him) for free," she says in my new video. "But it would've been illegal."

It would be illegal because of something called certificate of need (CON) laws.

Kentucky and three other states require businesses to get a CON certificate before they are allowed to run an ambulance service. Certificates go only to businesses that bureaucrats deem "necessary."

CON laws are supposed to prevent "oversupply" of essential services like, well, ambulances. If there are "too many" ambulance companies, some might cut corners or go out of business. Then patients would suffer, say the bureaucrats.

It raises the question: If there's demand, then who are politicians to say that a business is unnecessary?

Phillip Truesdell, Hannah's father, often takes patients to hospitals in Kentucky, "I drop them off (but) I can't go back and get them!" he told me. "Who gives the big man the right to say, 'You can't work here'?!"

Phillip and Hannah applied for a CON certificate and waited 11 months for a response. Then they learned that their application was being protested by existing ambulance providers.

"We go to court, these three ambulance services showed up," recounts Howe.

"They hammered her, treated her like she was a criminal," says Truesdell. "Do you know what you're going to do to this company?!…To this town?!"

"It wasn't anything to do with us being physically able to do it. (They) just came through like the big dog not trying to let anybody else on the porch," says Howe.

Three other ambulance companies also applied for permission to operate in Kentucky. They were rejected, too.

Truesdell and Howe were lucky to find the Pacific Legal Foundation, a law firm that fights for Americans' right to earn a living.

One Kentucky ambulance provider who opposed the new applications sent me a statement that says "saturating a community with more EMS agencies than it can…support (leads) all agencies to become watered down."

It's not just ambulance companies and people waiting for ambulances who are hurt by CON laws. Thirty-five states demand that businesses such as medical imaging companies, hospitals, and even moving companies get CON certificates before they are allowed to open.

Boden warns: "Once you get these laws on the books, it's very hard to get them off. Monopolies like their monopoly. This started back in the '70s with the federal government."

But the feds, amazingly, wised up and repealed the mandate in 1987, saying things like, "CON laws raise considerable competitive concerns (and) consumers benefit from lower prices when provider markets are more competitive."

Unfortunately, politicians in Kentucky and many other states haven't wised up.

When Virginia tried to abolish its CON law, local hospitals spent $200,000 on ads claiming competition will force hospitals to close. Somehow, hospitals operate just fine in states without CON laws. But the Virginia scare campaign worked. The state still has a CON law.

In health care, and all fields, it's better to see what competition can do rather than letting the government and its cronies decide what to allow.