Body camera videos show a woman being tased into compliance after being placed on suicide watch. 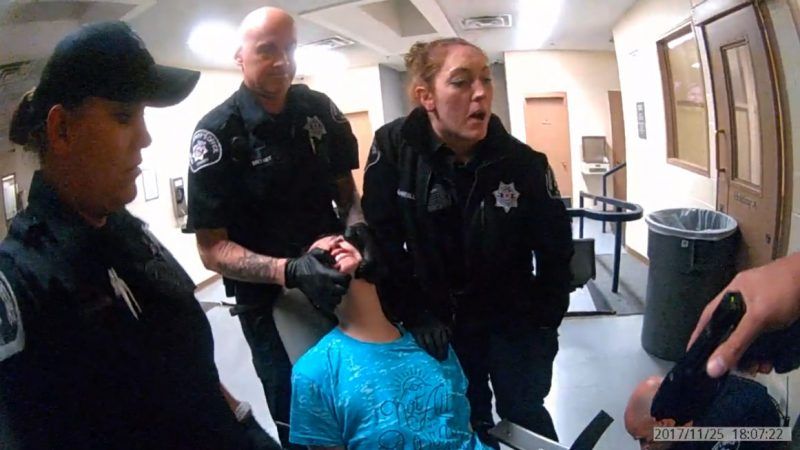 A lawsuit alleges that Boulder police used excessive force when they tased a woman after arresting her for smoking and allowing her dog off leash in 2017.

The plaintiff in the suit, Lauren Gotthelf, owns an emotional support dog named Sage. After getting Sage's picture with Santa, the pair walked through the Pearl Street pedestrian mall on their way back to Gotthelf's vehicle. Sage was off-leash.

Boulder Police Department Officer Ryan McAuley approached Gotthelf and told her that she could not have Sage on the mall and could not smoke a cigarette that she had recently lit. Gotthelf replied that Sage was a service animal and therefore was allowable under the Americans with Disabilities Act. McAuley responded by telling Gotthelf that she would be receiving a summons for walking there with a dog, for lighting a cigarette, and—after she put the cigarette on the ground—for littering. Gotthelf protested that there were other dogs in the area whose owners were not being harassed. She refused to sign the ticket.

McAuley called for backup. Gotthelf was arrested, and she and Sage were forcibly separated.

Boulder County Sheriff's Office (BCSO) deputies were tasked with booking Gotthelf. The booking was captured on body camera, and the sheriff's office later released the footage.

In the video, Gotthelf accuses the officer of "playing games" over the ticket. As she removes her jacket in compliance with the deputies, she says that she simply wanted to pay her fine and get her dog.

"It doesn't work that way," says Sgt. Chris Reiss, the voice behind the body camera. He proceeds to explain that Gotthelf will have to wait until they receive more information from the arresting officer.

When Reiss says Gotthelf is "a little agitated" by her arrest, Gotthelf responds that she is in fact "agitated" because her service dog has been taken to animal control. She also repeatedly challenges the decision to put her in the holding cell.

There is a significant gap between the end of the first video and the start of the second. During this time, the BCSO claims, the prisoner "continually made negative, vulgar, and racist comments to deputies. She continued to yell insults for forty-five minutes. As the video depicts, Ms. Gotthelf continued to be resistant and disruptive, and Jail personnel determined she would be placed in the restraint chair, which was necessary for her safety."

The second video picks up with deputies accusing Gotthelf of threatening to hang herself.

Gotthelf is seen behind the holding cell door denying that she threatened suicide. Gotthelf and the deputies continue to argue over what she said. They give her two options: go into a restraining chair, or strip down, put a smock on, and go on suicide watch.

Gotthelf tells them to take her to the hospital if they truly believe she's suicidal. Once she's in the restraining chair, a deputy holds Gotthelf's chin in what is called a hypoglossal hold. Another calls for a spit mask. The rest strap Gotthelf in the chair while Reiss still holds his taser. The deputies repeatedly yell at Gotthelf to "sit down" before Reiss tases her thigh (or, as the BCSO statement puts it, he "touch tased her once with the 'drive‐stun' setting in the left thigh for pain compliance").

Reiss yells at Gotthelf to "sit down" and "stop resisting"; Gotthelf screams, "I can't." Once she is completely secured, a deputy pushes her into a cell and has her face the wall before Reiss suggests turning her around.

"It's obviously excessive force," Gotthelf attorney, Mari Newman, tells Reason. "They rely on the assertion that she made a suicidal statement as justification to abuse her." If the deputies felt that Gotthelf was a danger to herself, Newman adds, "There's nothing about slamming her into a wall, handcuffing her behind the back, slapping her into a restraint chair, grabbing her by the throat, and tasing her that would have helped that."

Gotthelf's suit alleges that police discriminated against her under the Americans with Disability Act. The sheriff's office maintains that it acted in compliance with its use of force and taser policies, since Gotthelf was resisting their commands.

CORRECTION: A previous version of this article stated that Lauren Gotthelf is mentally disabled; the complaint alleges that police discriminated against her under the Americans with Disability Act "solely because of her actual and/or perceived disability and its manifestations." The name of Gotthelf's lawyer was also misspelled.