The NYPD Bragged About a Big Pot Bust. Turns Out It Seized 106 Pounds of Legal Hemp.

Green Angel CBD had the proper documentation for their shipment, but that didn't stop the New York cops. 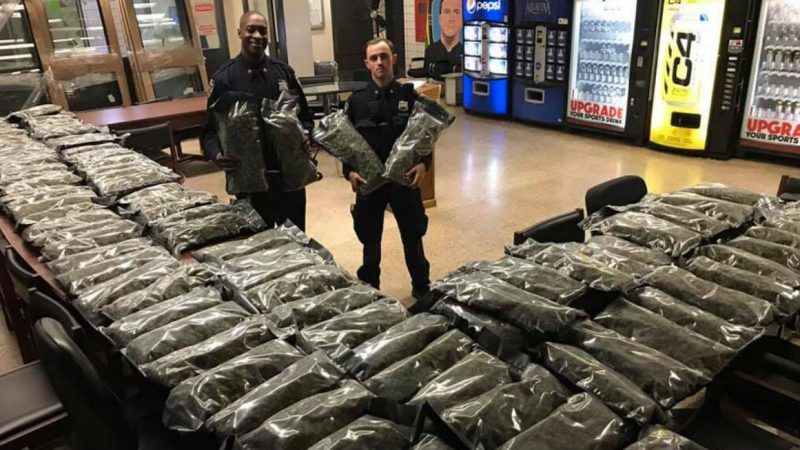 After six years in the natural medicine business, Green Angel CBD owner John Dee has faced an obstacle so large that he could be forced to close his doors: the New York Police Department's 75th Precinct.

Over the weekend, Dee sent a 106-pound shipment of hemp flower from a Vermont farm via FedEx Freight. FedEx thought the $30,000 shipment might be pot, so it informed the Williston Police Department in Vermont. After investigating, the cops produced a police report showing that the company was a licensed hemp grower and that the hemp's THC content was 0.06 percent, well within the legal limit.

Great job by Day Tour Sector E yesterday. Working with FedEx and other local law enforcement, they were able to confiscate 106 Lbs. of marijuana, and arrest the individual associated with the intended delivery.

The NYPD then contacted Dee, asking him to go to the station to pick up the shipment. Dee was recovering from a medical procedure, so he sent his brother, Ronan Levy, in his place. The request appeared to be a trap. After Levy walked into the station, the officers arrested him, charged him with six counts of possession, and jailed him. He has since been released without bail.

At a press conference on Wednesday, officials said the shipment was tested as marijuana and denied that Levy had a proper bill of landing stating that shipment was hemp.

Dee believes the officer ignored the paperwork in hopes that he had a major drug bust on his hands.

Dee also says the NYPD relied on an outdated field test from the 1960s. The test cannot differentiate between levels of THC, a key to absolving the company and Levy of any suspected crime.

Records show that Rodney Greenidge, the arresting officer, reached his initial conclusion because the hemp "possesses the same physical characteristics" as pot. Hemp's similarity to marijuana has led to all sorts of confusion in American law enforcement.

Because the department is holding on to his shipment, Dee stands to lose a lot of money—and perhaps even his business. "This was our shipment," he wrote on Instagram. "My brother was falsely arrested. Those bags were all hemp. All documents were in each box. The farm also called them to give them all there paperwork proving it's all hemp! Please spread the word! We need to let people know we are not criminals."

Dee and Levy are also considering legal action against FedEx and the NYPD.