The Trade War Is Still Inflating the Trade Deficit

Trump's trade war is failing to achieve its primary policy goals, but the really bad news is elsewhere. 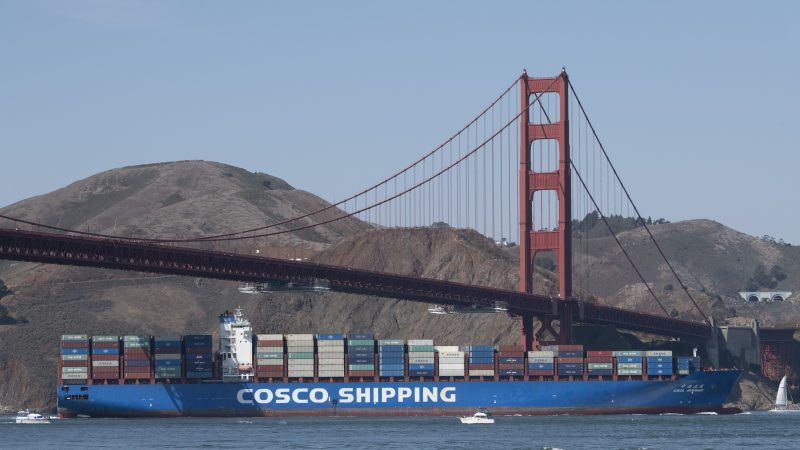 Through the first three quarters of 2019, the United States' trade deficit has increased by about 5 percent over the same nine months last year, according to new data released Tuesday. That's despite promises from the Trump administration that hiking tariffs and fighting a trade war with China would reduce the trade deficit, which is the gap between the value of goods America imports and exports.

The new federal data shows that the trade deficit actually shrank slightly during the month of September, but even that bit of good news for the administration comes with a dark cloud hanging over it. The trade deficit narrowed slightly because imports declined by 1.7 percent during September, while exports declined by about 0.9 percent during the month, according to the Commerce Department.

Over the first nine months of 2019, however, imports have grown by $17.8 billion from the same period during 2018, and exports have declined by about $7 billion.

Indeed, the tariffs and trade war don't seem to be doing much to reduce Americans' demand for imported goods—though consumers and businesses are being forced to pay higher taxes on imports from China because of Trump's trade policies. While it has failed to reduce American demand for foreign goods, Trump's trade war has managed to reduce how much America exports. This is the opposite result Trump was supposedly seeking. Instead of boosting American industries by cutting off foreign competition, the trade war seems to be undercutting American businesses' ability to sell goods abroad.

That's happened in different ways in different places. Lobsters are one example. As The Washington Post's Rachel Siegel detailed in a feature story last week, China's retaliatory tariffs aimed at American lobsters have dramatically reduced sales. Before the tariffs were in place, Chinese consumers bought about as many lobsters from the United States as from Canada—about $84 million annually from both sources. Since the trade war began, however, sales of Canadian lobsters to China have doubled while American exports have been cut in half, the Post reported.

It's the same thing that's happened to American farmers, some of whom may have permanently lost their access to China's markets as Chinese consumers have turned to other countries to supply soybeans and other imported goods.

The trade war has slowed the flow of goods in the other direction as well. There has been a 25 percent decline in U.S. imports of tariffed Chinese goods during the first half of 2019, according to a report released Tuesday by the United Nations Conference on Trade and Development. The group called the U.S.-China trade war "a lose-lose" scenario for the global economy.

The deeper you dig into the new trade data, the more bad news you find. Imports of industrial equipment like computers and semiconductors fell by nearly 2 percent during the third quarter—outpacing the overall decline. Imports of consumer goods—a category that includes everything from smartphones to children's toys, and clothing to furniture—fell by 4.4 percent during the same period. Imports of cars and car parts also fell faster than the average, tumbling by 3.4 percent.

Those drop-offs "may bode poorly for consumer spending, which has been the main pillar of support for the U.S. economy this year amid a global economic slowdown," reported The Wall Street Journal.

Whether the trade deficit is growing or shrinking probably matters less than many of those other indicators. As I've written before, trade surpluses and deficits are poor ways to understand the overall health of an economy—despite President Donald Trump's fixation on the trade deficit.

The bigger problems, for Trump and for the American economy, are all those other data points showing that the trade war is reducing exports and domestic business investment, while also dragging down economic growth.

Trump says he is on the brink of reaching a preliminary trade deal with China—and his administration has postponed plans to add more tariffs next month. The details of that supposed deal remain sketchy, but any agreement between the two sides would be a welcome break from Trump's economic self-sabotage.