A Survey Finds Speech Restrictions Are Pretty Popular. That's Why We Need the First Amendment. 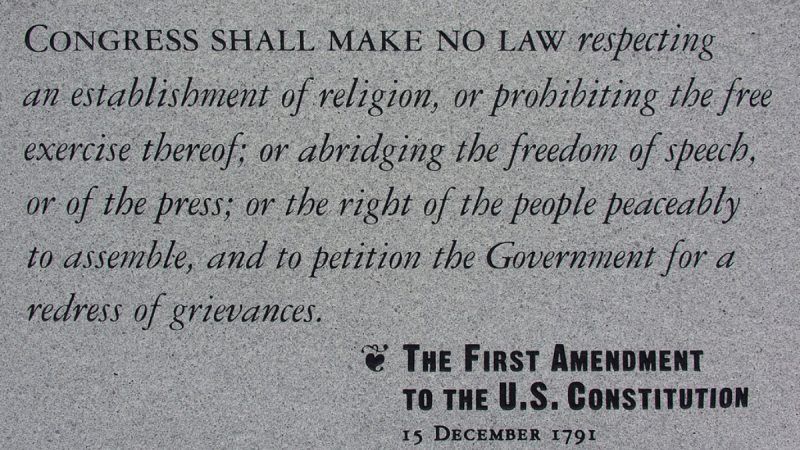 The First Amendment is unpopular…which is why we need the First Amendment. A recent survey commissioned by the Campaign for Free Speech underlines that point, finding that most Americans support viewpoint-based censorship, suppression of "hurtful or offensive" speech "in universities or on social media," government "action against newspapers and TV stations" that print or air "biased, inflammatory, or false" content, and revising the First Amendment, which "goes too far in allowing hate speech," to "reflect the cultural norms of today."

That last position was endorsed by just 51 percent of respondents, compared to 42 percent who disagreed and 7 percent who had no opinion. But 57 percent favored legal penalties for wayward news organizations, 61 percent supported censorship of "hurtful or offensive" speech in certain contexts, and 63 percent said the government should restrict the speech of racists, neo-Nazis, radical Islamists, Holocaust deniers, anti-vaccine activists, and/or climate change skeptics.

On a more heartening note, the idea of tasking "a government agency" with "reviewing" the output of "alternative media sources" mustered support from just 36 percent of respondents, although the opponents still fell short of a majority. Likewise with a law against "hate speech," which 48 percent favored and just 31 percent opposed.

"The findings are frankly extraordinary," Bob Lystad, executive director of the Campaign for Free Speech, told the Washington Free Beacon. "Our free speech rights and our free press rights have evolved well over 200 years, and people now seem to be rethinking them."

We have no data for prior years from this poll, which was conducted by CARAVAN Surveys in early September with a sample of about 1,000 adults. It is therefore hard to say, based on these results, whether Americans are actually "rethinking" their support for freedom of speech or simply expressing the qualms they've always had.

Survey data from the Freedom Forum Institute indicate that the share of Americans who think "the rights guaranteed in the First Amendment go too far" has fluctuated quite a bit since 1999. It was 29 percent in a survey conducted this year, which is higher than in the previous four years but far from a record during the last two decades.

Still, the breakdown of responses by age in the Campaign for Free Speech survey does not bode well for the future. On almost every question, millennials (ages 21 to 38) were more likely to support speech restrictions than older respondents were. But contrary to what you might think, people with college degrees were less inclined to favor speech restrictions than respondents who either did not attend or did not complete college.

If the rights guaranteed by the First Amendment were consistently supported by most Americans, of course, there would be little need to enshrine them in the Constitution. The whole point of a constitutional guarantee is to protect fundamental rights against the whims of passing majorities. While Lystad is right that a decisive turn in public opinion against freedom of speech and the press could jeopardize these liberties in the long term, it's not clear we are experiencing such a shift.