Unfortunately, rather than challenging Warren on the constitutionality of her plans, Biden is imitating them, at least when it comes to the assault on the First Amendment. 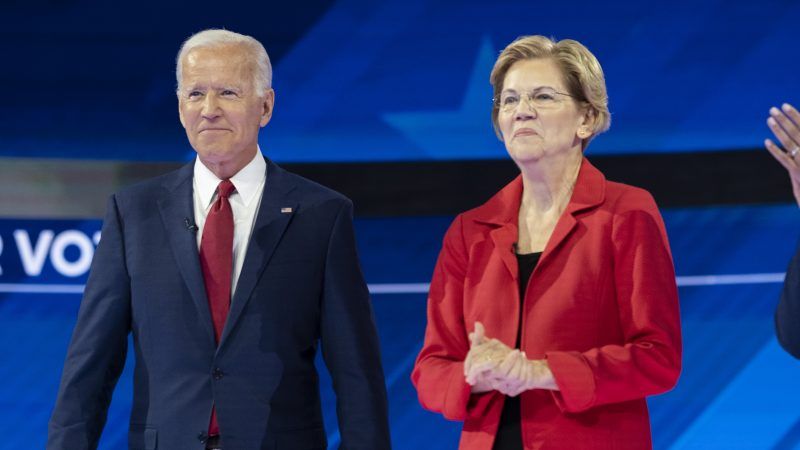 Joe Biden recently called for the impeachment of President Trump, explaining, "He is shooting holes in our Constitution. We cannot let him get away with it."

Biden's concern for the Constitution is touching. But so long as he is on the topic of our nation's basic law, let him also direct his attention to the senator from Massachusetts who is emerging as his most formidable rival for the Democratic presidential nomination, Elizabeth Warren. Warren's presidential campaign isn't just shooting holes in the Constitution—it's ripping the document into little pieces, throwing them into the air, and stomping all over them when they fall to the floor.

Warren has at least two main lines of attack against the Constitution—lobbying reform and the wealth tax.

She has been out on the campaign trail promising to, as she puts it, "end lobbying as we know it."

"The right of every person in this country to petition their government does not protect a multi-billion-dollar influence industry whose sole purpose is to undermine democracy and tilt every decision in favor of those who can pay," is the way she put it at one recent rally. It's great to see Warren acknowledge the First Amendment's right to petition the government for redress of grievances. But if she's so dismissive of the right of petition, imagine how she feels about the First Amendment rights of speech, of the press, and of assembly—all of which would be similarly trampled by her series of proposals to curtail political speech.

Warren's proposal to strip from Americans the rights of petition, speech, press, and assembly that are enshrined in the First Amendment is closely related to her proposal to infringe on property rights. Some might see the lobbying reform and the wealth tax as unrelated. Actually, the two policy initiatives go hand in hand. Once Warren restricts the political speech rights of wealthy Americans, it will make it easier for her to take away their property.

Warren's proposed wealth tax arguably violates several different provisions of the constitution, including the bill of attainder clause in Article I, the takings clause of the Fifth Amendment, and the "direct taxes" clause in Article I, which the Sixteenth Amendment revised only in terms of an income tax, not a wealth tax. The wealth tax proposed by Sen. Bernie Sanders (I–Vt.) faces similar challenges. Warren trots out letters from left-leaning law professors attesting to the constitutionality of her plan. If the plan weren't so constitutionally illegal to start with, though, there'd be no need to produce lawyer letters insisting on the legality of it. This is the tax version of Warren's insistence that the First Amendment's right of petition doesn't make it illegal to ban lobbying. When a politician's first hurdle is convincing voters that her plan isn't unconstitutional, it doesn't exactly inspire confidence.

As for Biden, his own professed concern about the Constitution is welcome. But if he limits his defense of it to attacks on Trump, people may reasonably wonder whether his concern is principled or merely partisan. If Biden starts to make constitutional arguments against Warren, though, it could be a way for him to boost his own credibility while also putting her on defense.

Unfortunately, rather than challenging Warren on the constitutionality of her plans, Biden is imitating them, at least when it comes to the assault on the First Amendment. This week, Biden announced an effort to amend the Constitution "to entirely eliminate private dollars from our federal elections." Biden served for 36 years in the Senate without enacting such an amendment. His campaign did offer as precedent that he had backed a failed constitutional amendment that said, "Congress shall have power to set reasonable limits on the amount of contributions that may be accepted by, and the amount of expenditures that may be made by, in support of, or in opposition to, a candidate for nomination for election to, or for election to, Federal office."

Trump is accused of shooting holes in the Constitution. Warren and Biden, though, are openly promising to feed the document through a cross-cut paper-shredder. It makes it harder to take their criticism of Trump seriously, at least on the constitutional front.