"I’m not willing to give up and let a handful of monopolistic companies dominate our democracy," said Sen. Elizabeth Warren. 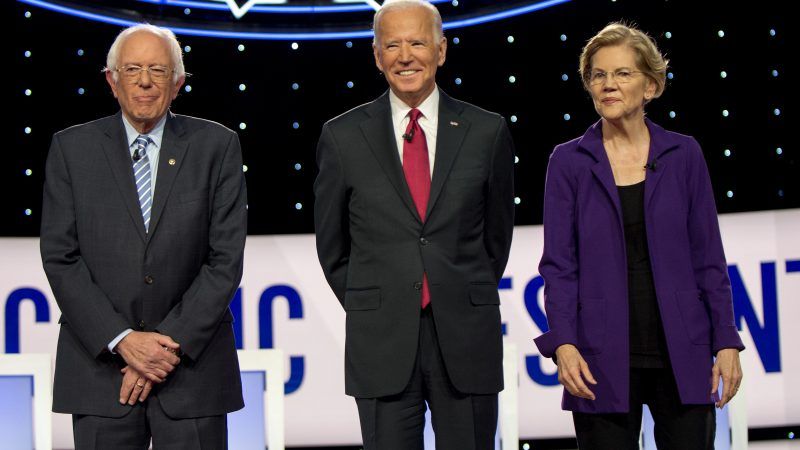 Big Tech came in for another round of fact-free attacks at Tuesday night's Democratic debate, where everyone from Sen. Elizabeth Warren (D–Mass.) to Andrew Yang warned that companies like Facebook, Amazon, and Google are harming American democracy.

Yang addressed the issue first, and while he did not voice support for the federal government breaking up these companies, he did assert that addiction to smart phones is making young people more anxious and depressed. But the evidence for this is far from definitive: A recent study found that spending more time on their phones actually made kids happier.

When her turn came to bash Big Tech, Warren whined that Amazon plays a dual role: providing a platform for outside merchants and also selling their own goods on that platform. "You get to be the umpire or have a team but you don't get to do both," she said, calling on the government to "break up these giant companies that are dominating." It's obvious what would happen if Warren got her way: Americans would have to pay more money, and surrender a great deal of convenience, to purchase the consumer goods they want.

Sens. Kamala Harris (D–Calif.), Cory Booker (D–N.J.), and Bernie Sanders (I–Vt.) stressed that Big Tech has too much economic and political power—Harris even criticized Warren for not joining her in calling on Twitter to kick President Donald Trump off the platform.

Former Rep. Beto O'Rourke (D–Texas) pushed back on some of the more extreme things the other candidates were saying. "I don't think it is the role of a candidate for the presidency to call which companies should be broken up," he said.

The concern that Big Tech has too much power to control the conversation—something Sanders touched on briefly—is shared by many on the right as well as the left. On Wednesday, Congress will hold a hearing on "fostering a healthier internet to protect consumers." The likely goal of the proceedings is to undermine support for Section 230, the statute that quite literally makes free speech on the internet possible. Sadly, in their zeal to punish tech companies for enjoying success—and for making decisions they sometimes don't like—too many lawmakers are eager to destroy this essential bulwark of the free internet.