Mayor Betsy Price: "The gun is irrelevant. She was in her own home caring for an 8-year-old nephew. [Jefferson] was a victim." 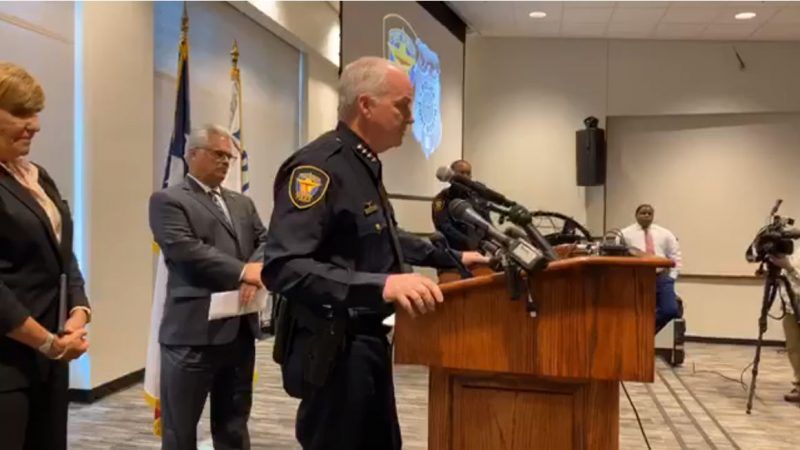 (Screenshot via Fort Worth Police Department/Facebook)

City leaders in Fort Worth, Texas, held a news conference today to provide more details on the fatal shooting of Atatiana Jefferson, which occurred while she was watching her 8-year-old nephew.

Jefferson was killed in her own home early Saturday morning after a neighbor contacted the non-emergency line to ask for a welfare check. The neighbor, James Smith, told police that the lights were on in the house and the doors were open. He also noted that the family's vehicles were parked in the driveway and that it was normal for them to be home at the time.

Body camera footage shows two responding officers walking around outside to investigate. One of the officers, now identified as Officer Aaron Dean (Badge #4598), was seen shining a flashlight through a window and shooting immediately after shouting, "Put your hands up! Show me your hands!" At no point does the video show the officers announcing that they were law enforcement.

Price began by apologizing on behalf of the city. Price also apologized to Smith, who says he now regrets calling the police, for having his "sense of security and trust in law enforcement jeopardized."

Price also addressed the footage of the shooting that was released by the Fort Worth police.

At one point, the video cuts to a blurry still of a gun that police said was inside of the house. At the time, police did not explain whether or not they saw Jefferson holding the gun, or if it was even in the room with her at the time of the killing.

"The gun is irrelevant," Price told reporters, with Kraus nodding behind her. "She was in her own home caring for an 8-year-old nephew. [Jefferson] was a victim."

Kraus began his statement by agreeing with Jefferson's father, who called the shooting "senseless."

Kraus said that both the Major Case Unit and Internal Affairs are investigating the shooting. He said that Officer Dean was served with an administrative complaint on Sunday, and had his badge and gun taken away. Kraus said he intended to fire Dean on Monday for violating the department's use of force policy, violating the deescalation policy, and displaying unprofessional conduct. But Dean submitted his resignation prior to their scheduled meeting.

Despite this, official administrative paperwork will show that he was dishonorably discharged from the department. Dean was hired by the department in 2017 and became a licensed police officer in 2018.

While Dean is no longer a city employee, the department will continue to investigate as though he was. Dean also faces criminal charges for his actions.

Dean's resignation means that his identity is officially released from the protections under state civil law.

Cook offered condolences to Jefferson's family and noted that members of the community have called for an independent investigation of the shooting. With approval from city council, candidates for an independent monitor will be interviewed in November. In the meantime, a group of "third-party national experts" will also be tasked with reviewing the police department's policies and training practices.

Posted by Fort Worth Police Department on Monday, October 14, 2019