Snowden didn’t subject his autobiography Permanent Record to pre-publication review by the federal government that’s also trying to throw him in prison. 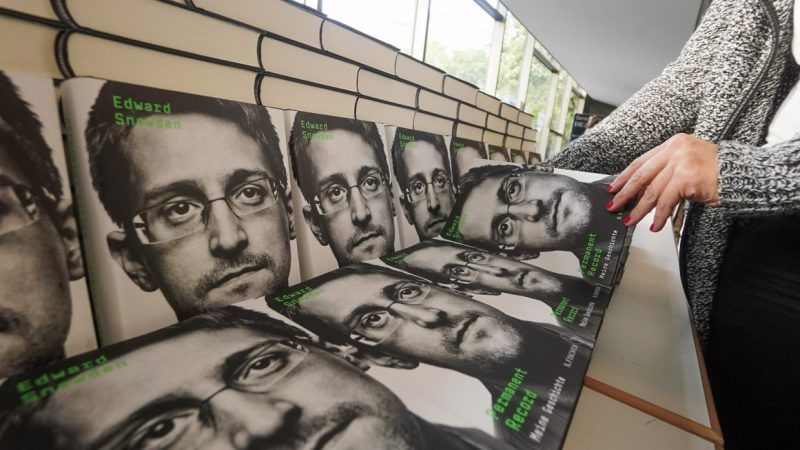 My copy of Edward Snowden's new autobiography, Permanent Record, arrived in the mail yesterday just hours after the Department of Justice announced that they want to seize the money I (and many others) paid for it and transfer that money to the federal government.

The Justice Department has filed a civil suit in the United States District Court for the Eastern District of Virginia accusing Snowden of breaching his non-disclosure agreement as a former CIA employee and National Security Agency (NSA) contractor by not submitting his book for pre-publication review so that government officials can make sure it didn't reveal any classified information.

Snowden is living in exile somewhere near Moscow, charged by this same Justice Department with espionage in 2013 for leaking troves of classified documents showing how the NSA had been secretly collecting massive amounts of private phone and internet communications data from millions of Americans, using a section of the post-9/11 Patriot Act as justification.

Rather remarkably, the Justice Department, despite its concerns that the CIA and NSA did not pre-review his book, is not seeking to stop the book's distribution. Instead, they want to force MacMillan Publishers, MacMillan Publishing Group, and Holtzbrinck Publishers to hand over to the government any money they earn from the book's sales and not pass along any of the proceeds to Snowden.

They're invoking a Supreme Court precedent from 1980, Snepp v. United States, that allows the government to seize royalties from former CIA and NSA employees if they publish books about agency activities without submitting their manuscripts for pre-publication review.

Mind you, there's nothing in this Justice Department lawsuit and its press release that explains what would have happened had Snowden, a fugitive, actually submitted his manuscript for review or how that would even work.

It doesn't stop there. Snowden has been giving speeches and remote interviews since 2014 about his work and his whistleblowing, and the Justice Department is going after him about that as well. The lawsuit notes that he makes money from his speeches, which he also does not submit to the CIA or FBI for pre-review (as his agreements with the agencies require).

The lawsuit seems rather comical given that Snowden is famous for leaking classified information, and Snowden's lawyer, Ben Wizner of the American Civil Liberties Union, has said in a statement that the book contains no classified information that hasn't already been published by the media.

But the lawsuit isn't supposed to make logical sense. The purpose of the lawsuit is to punish Snowden, even though they cannot get him back to the United States to put on trial. It's a bit similar to civil asset forfeiture: They aren't able to convict Snowden, so they're just going to try to take his stuff. Look at the way Assistant Attorney General Jody Hunt describes the actions of a man who became famous for informing the public that its own government was secretly collecting their private data:

"This lawsuit demonstrates that the Department of Justice does not tolerate these breaches of the public's trust. We will not permit individuals to enrich themselves, at the expense of the United States, without complying with their pre-publication review obligations."

Polls show that more Americans see Snowden as a whistleblower, not as a traitor. The public's trust was breached by the NSA's secret surveillance, not Snowden, who has maintained that the reason he won't return to the United States for a trial is because he won't be allowed to make the case to a jury that his actions were justified whistleblowing for the purpose of benefiting the American public—not an attempt to aid foreign opponents of the United States, as detractors claim.

Snowden, is of course, basking in the extra attention he's getting from the lawsuit, as well he should:

Yesterday, the government sued the publisher of #PermanentRecord for—not kidding—printing it without giving the CIA and NSA a change to erase details of their classified crimes from the manuscript. Today, it is the best-selling book in the world: https://t.co/oMJLOvUjG7

In the meantime, the authority for the type of domestic surveillance Snowden exposed expires this year unless Congress acts. Even though the NSA has actually abandoned this type of mass metadata collection and recommended that Congress let authorization lapse, the White House is not only asking for these authorities to be renewed, but to be made permanent.

We would not know nearly as much about the extent of unwarranted federal government snooping and the mass collection of Americans' data were it not for Snowden's whistleblowing. It's absurd and insulting—but not surprising—that the Department of Justice continues to paint him as an enemy of the American people and use that as justification to try to seize any money he makes, even from American citizens like myself who are voluntarily purchasing his book.

Below, defy the Justice Department to watch this interview of Snowden by Reason's Nick Gillespie in 2016: