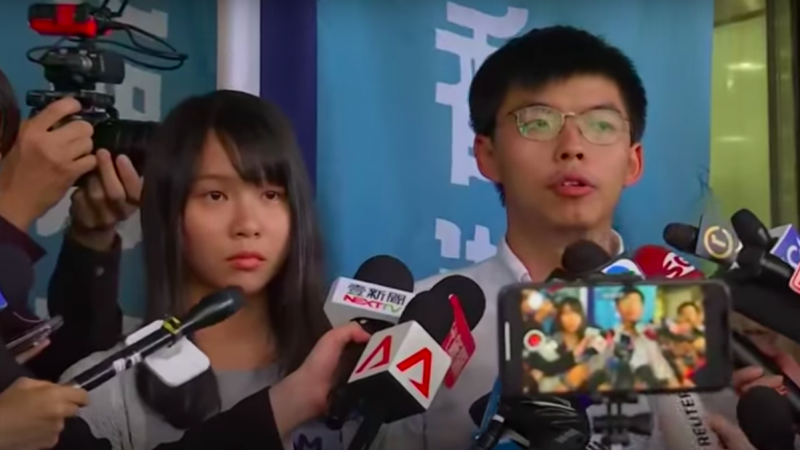 Two prominent Hong Kong activists, Joshua Wong and Agnes Chow, were arrested Friday for participating in unauthorized assembly and inciting other protesters to do the same. Both have been released on bail. Hong Kong police have also denied organizers permission to hold a march planned for Saturday.

The two 22-year-olds are leaders of Demosisto, an organization that backs greater autonomy and self-government for Hong Kong. (Wong serves as secretary-general while Chow is on the standing committee.) Wong first entered protest politics during Hong Kong's "umbrella movement" of 2014. Those roughly three months of demonstrations called for giving the semi-autonomous Chinese city's residents the right to elect their chief executive directly, without the Communist Party pre-screening the candidates. Currently, citizens "elect" the chief executive, but have no options aside from candidates who have earned Beijing's stamp of approval.

The current round of protests was set off by a bill, introduced in early June and suspended shortly thereafter, that would have allowed Hong Kong to extradite accused criminals to both Taiwan and mainland China. While the marchers are glad the legislation was suspended, they want it fully pulled—and they have broader demands too.

"The chief executive of Hong Kong should be elected by Hong Kong's people instead of picked by Beijing," Wong tells Reason. "We urge the government to terminate the bill, stop police brutality, and respond to our calls for free elections."

Though Hong Kong is technically a part of China, it operates under a "one country, two systems" policy that allows Hongkongers to enjoy basic democratic norms and due process. In 2047, though, Hong Kong's quasi-independent government will be dissolved and it will become fully absorbed into mainland China. The protesters fear China is speeding up this timeline.

"'One country, two systems' has already eroded," says Wong. "It's one country, one and a half systems." He adds that "Mainland Chinese people also deserve democracy."

Tensions between the protesters and the authorities have escalated in recent weeks. In mid-August, police beat up community organizers and shot a woman in the eye with a non-lethal bean bag round. Days later, airport protesters attacked some men they believed to be undercover Chinese infiltrators. (Their suspicions turned out to be right—one was a cop from Shenzhen, the other a reporter for state-owned media.) About a week after that, Chinese authorities disappeared a staffer at the British consulate in Hong Kong. The Washington Post reports that police have arrested more than 800 people in connection with the protests over the past few months.

"I was really shocked by the threat of police to us people on the fifth of August, the day we had the general strike," Wong says. "I joined the assembly outside of the government headquarters, and a sniper from the riot police fired tear gas from 40 floors" up. Wong says police have fired more than 2,000 tear gas shells over the course of the protests.

Now the cops are cracking down on protesters' ability to assemble in public places. The Associated Press reports:

The organizers of Saturday's march, the fifth anniversary of a decision by China against allowing fully democratic elections for the leader of Hong Kong, said they were calling it off after an appeals board denied permission. It was unclear whether some protesters would still demonstrate on their own.

The police commander of Hong Kong island, Kwok Pak Chung, appealed to people to stay away from any non-authorized rallies, warning that those caught could face a five-year jail term.