Documentary About Harvey Weinstein More Unsettling Than Any Horror Movie

Hulu's Untouchable is a relentless accounting of the mogul's sexual misdeeds. 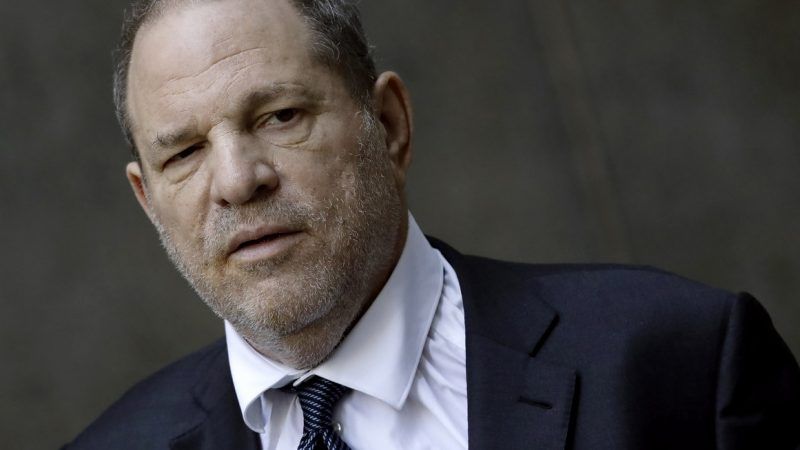 When the career of megaproducer Harvey Weinstein collapsed into a heap of #MeToo rubble a couple of years ago, there was a certain sensation of tumbling through a crack in time.

Anybody with even a passing acquaintance with Hollywood remembered the casting couches of the old studio strongmen like MGM's Louis B. Mayer, whose sexual proprietorship of his contract actresses extended even to ordering a teenaged Judy Garland to take her meetings with him while sitting on his lap. (That made it easier for him to cup her left breast when he told her he loved the way she sang from the heart.) But really? In 2017?

It was a feeling familiar to many of Weinstein's employees. "I remember meeting him," says one former (male) minion during an interview for the documentary Untouchable, "and thinking, 'This person can't exist.' He is just such a caricature of a Hollywood mogul that hasn't been around for decades."

As it turned out, the moguls were, if anything, more numerous and more voracious than their predecessors. Everybody from Dustin Hoffman to Louis C.K.—more than 250 men, by one count—was accused of behavior toward women ranging from grotesquely porcine to flatly rapacious. In many cases, the charges came from multiple women.

There are so many questions raised by all this, even beyond the snarky ones. (Such as: When the CBS human resources office posted openings for the job of being on call to perform oral sex on CEO Les Moonves, how much experience was required?)

One that's at once among the most important and most intriguing: Is this sort of sexual buccaneering by bosses common in workplaces outside Hollywood? Are the hallways at Microsoft and AT&T also playgrounds for predators? And if it's strictly a show-biz phenomenon, why? Is there some peculiar sexual pathology that's attracted to, or bred by, dressing people in costumes and ordering them around a stage?

There aren't really any answers to these questions to be found in Untouchable, an unremittingly harsh account (that's not a complaint but a compliment) of the Weinstein scandal that, after briefly appearing on the festival circuit early this year, gets its first real exposure this week on Hulu.

But if you want a crash course in Weinstein's thoroughgoing and possibly criminal loutishness (his trial on sexual assault charges is scheduled early next year), you couldn't possibly do better than this report from British television documentarian Ursula Macfarlane.

With an impressive—and often gut-wrenching—array of interviews with Weinstein's victims, former employees and journalists who dragged it all out in the open, Macfarlane traces Weinstein's managerial misdeeds all the way back the 1970s, when he was a concert promoter in Buffalo.

As he graduated from small-fry local promoter to big-time movie producer (Miramax, the company he formed with his brother Bob, churned out artistic and critical successes like Sex, Lies and Videotape, Shakespeare in Love and Pulp Fiction as if it were an assembly line), Harvey Weinstein's sexual skullduggery kept pace.

None of this was any secret to Miramax employees. One resigned after a friend she had recommended for a job as Weinstein's assistant reported being raped on her first day of work.  A secretary to Bob Weinstein was so horrified after opening and reading a detailed letter from an attorney representing one of Harvey's victims that she quit on the spot—and shouted "Your brother is a fucking pig!" on her way out the door.

In some ways, the grimmest interviews in Untouchable are those who didn't quit, who stayed on what some of them called "the Harvey train" even though they at least suspected what was going on.

"When you were with Harvey, you were going out to dinner with Sean Connery and Leonardo DiCaprio," explains one, looking into the camera but with obvious difficulty. "He created an energy around him that made you feel like you were at the center of the universe."

For many women, however, the center of the Weinstein universe felt more like the bottom circle of Hell. And their nightmarish, broken accounts make it clear that the definition of sexual assault can be hazy when the assailant is a boss and the victim an underling.

"When you read about rape, you read, 'Okay, well, the girl screams "no!" and kicks and screams,'" recalls actress Paz de la Huerta of her encounter with Weinstein. "But that's not exactly right. The way in which he overpowered me left me with no way out."

Not that women were Weinstein's only victims. As Untouchable makes clear, he abused everybody, sexually or otherwise. "In a lot of ways," remembers one female ex-employee, "he was tougher on the guys." Favorite tactic with the guys: hurling five-pound ashtrays at their heads."

And in the end, both his hubris and temper had both grown so much that they could be contained neither by the walls of Weinstein's office or even any sense of public propriety.

When a female reporter at a Manhattan book party asked him what he thought was an impertinent question about a Miramax film, Weinstein shouted, "Who let this cunt in here?", then put a headlock on her boyfriend (also a reporter) and dragged him out onto the sidewalk. "I'm glad I'm the sheriff of this shit-ass fucking town," Weinstein bellowed. Wear that badge with honor, sir.