Partisans, to your battle stations! 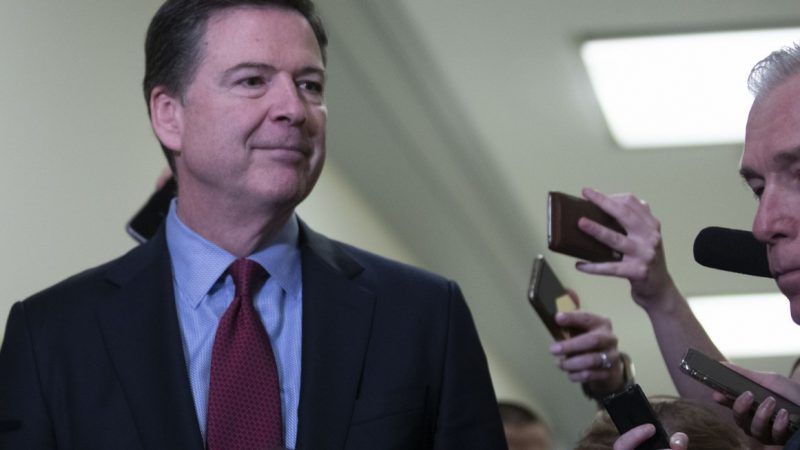 Former FBI Director James Comey broke FBI rules and improperly shared classified information with his attorneys in his efforts to keep track of—and alert the public about—President Donald Trump's alleged attempts to influence the investigations against his administration. But Comey did not leak classified information to the media.

Those are the conclusions of a report released today by the Department of Justice Office of Inspector General (OIG), which is the department's independent watchdog.

Comey believed that Trump's attempts to discourage the investigation of former National Security Adviser Michael Flynn were inappropriate, and he kept a series of memos documenting his encounters and conversations with the president. When Trump fired Comey in May 2017, the ex-FBI director kept the memos believing they were his own personal recollections and not the property of the FBI. He also arranged for some of the contents to be passed along to the press.

A massive media blitz followed, with Comey's observations playing an influential role in the debate over whether Trump's actions were worthy of impeachment. The OIG has determined that some of Comey's behavior here was improper.

To summarize the 83-page report:

In the end, the OIG concludes that:

In a country built on the rule of law, it is of utmost importance that all FBI employees adhere to Department and FBI policies, particularly when confronted by what appear to be extraordinary circumstances or compelling personal convictions. Comey had several other lawful options available to him to advocate for the appointment of a Special Counsel, which he told us was his goal in making the disclosure. What was not permitted was the unauthorized disclosure of sensitive investigative information, obtained during the course of FBI employment, in order to achieve a personally desired outcome.

While the report is very critical of Comey, the former FBI director believes he has been vindicated:

DOJ IG "found no evidence that Comey or his attorneys released any of the classified information contained in any of the memos to members of the media." I don't need a public apology from those who defamed me, but a quick message with a "sorry we lied about you" would be nice.

Trump insisted that Comey leaked classified information to the press, but it is now clear that the OIG found no evidence to support that allegation. Trump is unlikely to apologize, just as Comey defenders are unlikely to walk back their support based on his actual missteps. Jennifer Rubin of The Washington Post has already dismissed the problems the OIG did find as procedural complaints.

As an unabashed supporter of government whistleblowers and leakers, I am glad Comey leaked his own memos. He was a lousy FBI director who seems to have convinced himself that he's a hero, but I believe we have a right to know about and judge both his behavior and Trump's.

That Comey insists he's been vindicated and remained a free man throughout this entire affair should serve as a reminder that other whistleblowers much lower in the federal food chain—like Reality Winner (who exposed a report showing Russia's attempts to hack into American voting systems) and Daniel Everette Hale (who exposed serious flaws with the CIA's drone assassinations overseas)—received much different treatment. Winner is in prison and Hale has been arrested and charged.

If Comey's looking for another way to stay relevant now that he's been somewhat absolved, he should consider helping his fellow whistleblowers.

Read the OIG report for yourself here.

UPDATED: Trump tweets his opinion of the report:

Perhaps never in the history of our Country has someone been more thoroughly disgraced and excoriated than James Comey in the just released Inspector General's Report. He should be ashamed of himself!