Ursula Wing sold abortion drugs to U.S. customers and is now charged with conspiracy to defraud the United States. 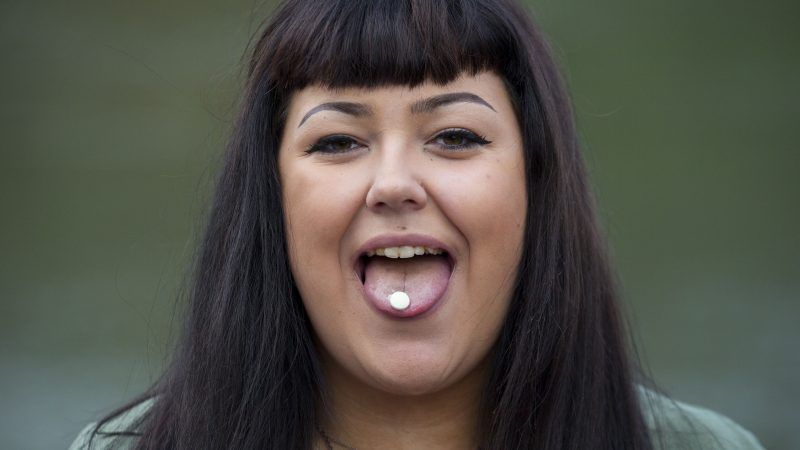 The first wave of prosecutions of abortion pill sellers is upon us. A federal court last week arraigned pill purveyor Ursula Wing on charges of introducing misbranded drugs into interstate commerce and of conspiracy to defraud the United States.

Wing, who lives in New York, is accused of running a website that sold foreign-sourced pharmaceuticals to U.S. customers. The drugs Wing supposedly sold—mifepristone and misoprostol—can be taken in a two-step process to induce an abortion. The U.S. Food and Drug Administration has approved this pill regimen for prescription use, under the brand name Mifeprex.

As with many rules surrounding abortion, these strict guidelines stem more from political issues than from reasonable health concerns.

"Despite a better safety track record than some over-the-counter drugs, the FDA prevents the sale of mifepristone at pharmacies, making it prohibitively expensive for many Americans who can't afford to travel to a registered clinic to get the abortion pill," notes the National Women's Health Network.

Regardless, Wing "could not legally sell prescription drugs because she was not licensed to do so," the complaint against her states. She allegedly bought the drugs wholesale from a pharmaceutical manufacturer in India. On an application with Western Union, she indicated that she was a retailer of Indian and Moroccan jewelry, clothing, and home goods through the business Morocco International Inc.

Wing "used a secret webpage called 'My Secret Bodega,' on her Macrobiotic Stoner blog," the government says, "to hide her activities from the FDA, [Customs and Border Protection and the U.S. Postal Service]."

She is due back in court on October 9.

The U.S. Food and Drug Administration has been sending warning letters to other online purveryors of abortion pills as well. Back in March, the FDA sent warnings to the companies AidAccess and Rablon about their unauthorized sales of mifepristone and misoprostol.

AidAccess was launched by Rebecca Gomperts, a doctor who also runs the Netherlands-based abortion pill provider Women on Web. According to University of Texas at Austin researcher Abigail Aiken, around 21,000 people tried to order abortion drugs from AidAccess between March 2018 and March 2019. Gomperts' lawyer told NBC that 2,581 were sent prescriptions.

The AidAccess website states: "If you are healthy and less than 9 weeks pregnant, you can do the online consultation. The abortion pills mifepristone and misoprostol will be delivered to you by mail." The FDA quoted this text and told the company that "by facilitating the sale of unapproved mifepristone and misoprostol to consumers in the U.S., Aidaccess.org causes the introduction of unapproved new drugs into U.S. commerce in violation of the [federal Food, Drugs, and Cosmetics] Act." The agency requested the company "immediately cease causing the introduction of these violative drugs" in the U.S.

"The FDA should get its own house in order before seeking out more ways to restrict access to mifepristone and misoprostol," said Cindy Pearson, executive director of the National Women's Health Network, in a statement. "Aid Access provides a vital service to women who want to safely and effectively self-manage their abortions at home. If the FDA is truly worried about the safety of abortion pills imported from overseas, they should…allow Aid Access to prescribe from US pharmacies."

In a May response, AidAccess told the government that "because access to medical abortions in the U.S. has been so restricted by the FDA, women have been forced to attempt to exercise their right to abortion by way of the Internet." It would not stop selling the pills.

"I will not be deterred," Gomperts wrote on Facebook. "When US women seeking to terminate their pregnancies prior to nine weeks consult me, I will not turn them away."

As abortion clinic access in the U.S. continually contracts, the popularity of online sellers like Wing, AidAccess, and Rablon is only likely to grow⁠—and so, too, calls to crack down on sites like these and political battles surrounding them. After the FDA's warning letters in March, more than 100 members of the House of Representatives sent the agency a thank-you letter.

"Many of these lawmakers represent the very states that have recently passed laws attempting to legislate legal abortion out of existence—including Alabama, Georgia, Kentucky, Mississippi, and Ohio," the group If/When/How: Lawyering for Reproductive Justice noted in a letter to the FDA. "This agency's warning letters and threatened actions will further these efforts to keep abortion inaccessible," it continued. "The FDA's obligation is to protect public health for all people in the U.S., not to be partisan or political. We strongly urge you to work on advancing the FDA's mission, not to be a part of a political agenda to deprive women in the U.S. of access to legal, safe and effective abortion care."

In July, a group of more than 50 organizations and individuals sent a letter urging "the FDA, state legislators, and all policy-making bodies to be guided by the science and support the removal of unnecessary regulatory barriers that make safe and effective abortion medications inaccessible to people who need them."