Did Apple CEO Tim Cook Get Trump To Realize Tariffs Are Harmful? 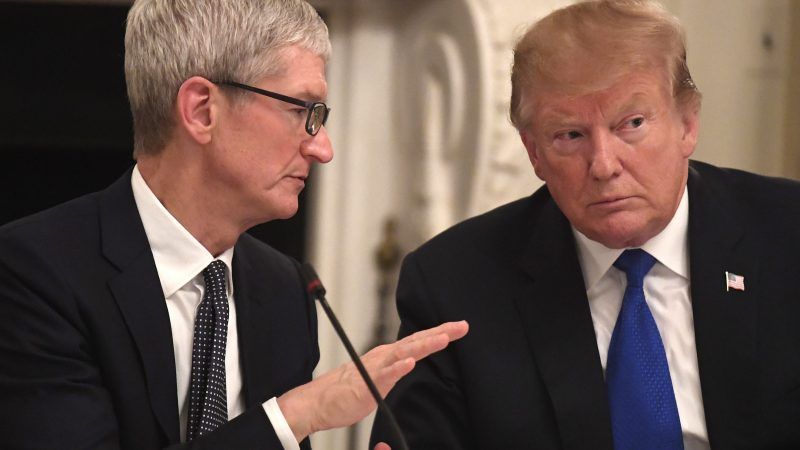 President Donald Trump had dinner on Friday night with Apple CEO Tim Cook, who may have imparted a critical lesson in international economics on the "Tariff Man" president. While some of his top advisors spent the weekend defending Trump's increasingly nonsensical tariff and trade policy, the president himself appears to have achieved a new level of understanding about how those policies are affecting American businesses.

As he was heading back to Washington, D.C., from a vacation at his hotel in Bedminster, New Jersey, on Sunday, Trump told reporters that Cook "made a very compelling argument" about how tariffs were making it more difficult for Apple to compete with companies like Samsung. Like many American-based tech firms, Apple relies on China to manufacture much of its products, even though high-level jobs in design and software engineering is done in America. As I wrote last year:

Cheap Chinese labor, contrary to popular opinion, is not the source of most of the savings achieved by building iPhones in China. Apple pays about $5 per iPhone in labor costs, but building phones in the U.S. would add only about $10 to that total. The real problem with trying to make an all-American iPhone is that cell phone components and parts are sourced all around the world. The pieces that go into an iPhone cost Apple about $190 to puchase, but would easily cost three times as much to produce in the U.S.

In the past, Trump has argued that Apple should simply do all it's manufacturing in America—despite the fact that doing so would likely make the retail price for an iPhone double or triple. But while Trump never appeared to be swayed by fears that iPhones would suddenly be too expensive for many Americans to afford, it looks like Cook might have appealed to Trump's competitive nature during their dinner.

As Bloomberg points out, Samsung assembles its products in Vietnam and South Korea, which means it can import all those globally sourced component parts without having to pay Trump's tariffs. Apple can't.

"It's tough for Apple to pay tariffs if it's competing with a very good company that's not," Trump said—apparently realizing something that economists have been trying to tell him for months.

It's possible that Trump has taken that lesson home with him to the White House. On Monday night, The New York Times reported that Trump administration officials are considering a series of maneuvers to ward off the threat of a recession—including a payroll tax cut and "a possible reversal" of some tariffs.

But the change in trade policy—if one is in the offing, and it's always difficult to be certain with this administration—may have come too late for some U.S. steelworkers. Despite the fact that Trump's tariffs on imported steel were intended to prop up domestic steelmakers, the opposite has (predictably) happened, as demand has fallen (and exports have too). On Tuesday morning, U.S. Steel announced that it would lay off about 200 workers at a plant in Michigan. That comes on the heels of the company's decision to shut down a blast furnace in Indiana last month.

It's too soon to say that Cook might have ended the Trump administration's misguided experiment with tariffs—but he might have at least made the president notice the mounting the economic evidence that tariffs are taxes paid by American businesses and consumers, not by China.

The comics giant had hired Spiegelman, who wrote the first graphic novel to win the Pulitzer Prize, to author an introductory essay for a forthcoming book about Marvel's "Golden Era" of comics that ran from 1939 through 1949. Those comics were highly political in nature—think Captain America literally punching Nazis—and Spiegelman's essay was the same. After being rejected by Marvel, the essay was published this week by The Guardian—you can read the full text here, but this seems to have been the offending paragraph:

"Auschwitz and Hiroshima make more sense as dark comic book cataclysms than as events in our real world. In today's all too real world, Captain America's most nefarious villain, the Red Skull, is alive on screen and an Orange Skull haunts America. International fascism again looms large (how quickly we humans forget—study these golden age comics hard, boys and girls!) and the dislocations that have followed the global economic meltdown of 2008 helped bring us to a point where the planet itself seems likely to melt down. Armageddon seems somehow plausible and we're all turned into helpless children scared of forces grander than we can imagine, looking for respite and answers in superheroes flying across screens in our chapel of dreams."

Is that across the line? Maybe, and Marvel certainly has the right to do as it pleases with its own publications. But if you're going to hire the guy who wrote Maus, don't act surprised when he gets political.

Prohibition still doesn't work. Americans spent an estimated $150 billion on marijuana, heroin, cocaine, and meth in 2016—nearly as much as they spent on alcohol.

Here is Reason's Jacob Sullum on the details of a new report from the RAND Corporation:

The fact that the illegal drug market and the alcohol market are in the same ballpark is pretty remarkable, given that drinkers outnumber illegal drug users by more than 3 to 1 if you look at consumption in the last year and nearly 5 to 1 among past-month consumers. The "risk premium" associated with prohibition helps explain why illegal drug users nevertheless manage to spend almost as much money as drinkers do. The near-parity in spending reflects the profits traffickers can earn thanks to prohibition and the welfare loss caused by artificially high prices. Prohibition enriches criminals and rips off consumers.

I mean, the deeper problem is that said study is hilarious trash, to the point where focus on nitpicky clarifications gives the whole thing undeserved credence. https://t.co/1QUsrpPviR