The five Democrats warn that the Court may have to be "restructured" if it keeps making decisions they don't like. 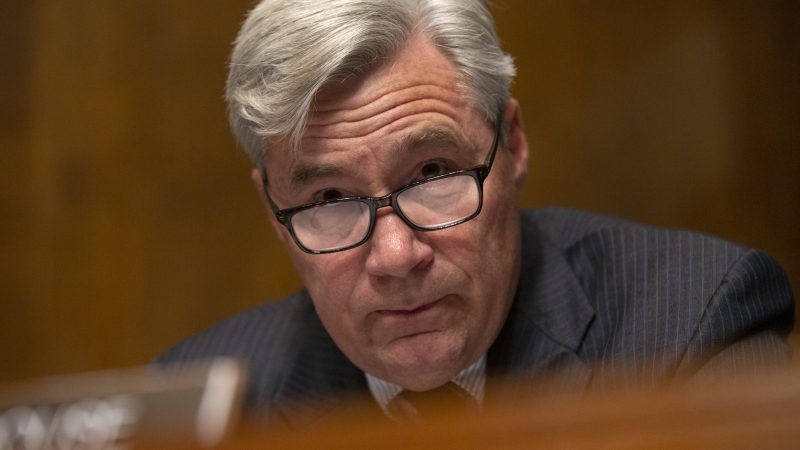 This week, five Democratic senators filed a brief in New York State Rifle & Pistol Association v. City of New York, a challenge to that city's absurdly tight restrictions on the transportation of legally owned firearms. In part, Sens. Sheldon Whitehouse (D–R.I.), Mazie Hirono (D–Hawaii), Richard Blumenthal (D–Conn.), Richard Durbin (D–Ill.), and Kirsten Gillibrand (D–N.Y.) argue that the case, which could give the Supreme Court an opportunity to clarify the contours of the Second Amendment after nearly a decade of silence on the subject, has been rendered moot by New York City's recent revision of its regulations. But most of the 25-page brief is devoted to the argument that the Supreme Court has been corrupted by a shadowy right-wing financial network bent on changing policy through litigation. The brief concludes with a warning that if the Court continues to do the bidding of these donors—i.e., if it continues to make decisions that Whitehouse et al. do not like—it may have to be "restructured in order to reduce the influence of politics."

The senators imply that the justices should not trust the amicus briefs urging them to consider the constitutionality of New York's policy because the organizations behind them have financial motives for taking that position. "At least 8 amici purport to represent gun organizations which, like petitioner, are affiliates of the NRA," they say. "At least 6 amici report receiving funding from foundations and other often anonymously funded sources connected to [Federalist Society Executive Vice President] Leonard Leo's network that regularly fund ideological litigants and amici before this Court." While "at least 32 amici filing briefs in support of petitioners do not disclose their organizational donors," they say, "were there such transparency, this amicus army would likely be revealed as more akin to marionettes controlled by a puppetmaster than to a groundswell of support rallying to a cause."

These ad pecuniam arguments are, of course, logically empty, since they have nothing to do with the issues before the Court: whether the case is moot and, if not, whether New York's restrictions are constitutional. It is hardly surprising that the National Rifle Association or its affiliates would want the Court to hear a Second Amendment case. Nor is it surprising that other individuals and organizations that support the constitutional right to arms would agree, or that they might attract financial support from like-minded people. None of that has any bearing on the legal issues.

The idea that there is something sinister about trying to influence the law through strategic litigation, aided by financial support from people who support the cause, is hard to take seriously. Would these senators condemn the American Civil Liberties Union, the NAACP, or their supporters on the same grounds? Would they say the money received by progressive organizations makes their legal arguments invalid?

The senators' broader point, however, is that legal arguments do not matter to the Court's conservative members, who rule the way they do not because they are applying the law in good faith but because they are beholden to the moneyed interests that helped install them:

From October Term 2005 through October Term 2017 this Court issued 78 5-4 (or 5-3) opinions in which justices appointed by Republican presidents provided all five votes in the majority. In 73 of these 5-4 decisions, the cases concerned interests important to the big funders, corporate influencers, and political base of the Republican Party. And in each of these 73 cases, those partisan interests prevailed….

The pattern of outcomes is striking; and so is the frequency with which these 5-4 majorities disregarded "conservative" judicial principles like judicial restraint, originalism, stare decisis, and even federalism.

The senators thus portray the Court's conservative wing as a bunch of political hacks who do not even follow their own avowed principles. In the senators' view, the differences between the majority and the minority in these cases cannot be explained by honest disagreement. The justices who reached conclusions the senators favored were conscientiously applying the law, while the justices who reached conclusions that the senators opposed were simply following the marching orders of the Republican Party.

Regarding this particular case, the senators say, the NRA worked hard to win the confirmation of Brett Kavanaugh, who had taken a strong position in favor of the Second Amendment as an appeals court judge. The NRA "promoted the confirmation (and perhaps selection) of nominees to this Court who, it believed, would 'break the tie' in Second Amendment cases," Whitehouse et al. say. "During last year's confirmation proceedings, the NRA spent $1.2 million on television advertisements declaring exactly that."

Furthermore, they say, the Federalist Society (which also has a budget!) published an article suggesting that the replacement of retired Justice Anthony Kennedy with Kavanaugh could have a crucial impact on the Court's willingness to hear Second Amendment cases. Full disclosure: I said the same thing, and I work for one of those nonprofit organizations that Whitehouse et al. deem suspect when they take positions that Whitehouse et al. do not like.

The senators (like Linda Greenhouse) seem to be hoping that Chief Justice John Roberts will join the Court's liberal wing in voting to drop this Second Amendment case because he worries about the Court's reputation as an apolitical body that acts as a referee, "calling balls and strikes" rather than siding with one team or another. "In the wake of a multimillion-dollar advertising campaign to shape this Court's composition" and "an industrial-strength influence campaign aimed at this Court," they warn, hearing this case would only confirm that the justices are "motivated mainly by politics," a sentiment endorsed by "fifty-five percent of Americans" in a recent Quinnipiac University poll. "Obviously," they say, "the Court is not standing back in dispassionate form and 'calling balls and strikes' when it is laying the groundwork for future policy changes or soliciting opportunities to change policy [e.g., by arguing that the Court should address a certain issue in an appropriate case]. That should be unacceptable in the context of separated powers."

Yet in the process of making this argument, the senators are insulting Roberts, who joined the majority in all those decisions the senators deem clearly political, by attacking his integrity and intellectual honesty. And by closing with a threat that the Court may have to be "restructured" if it continues to issue decisions that offend Democrats—in the name of insulating the Court from politics and protecting the separation of powers, no less—the senators are choosing a tack that is apt to irritate not only Roberts but members of the Court's liberal wing as well.

"It's hard to describe to non-lawyers how truly extraordinary this filing is," writes National Review's David French. "You can spend a lifetime reading Supreme Court briefs, and while you'll certainly find passionate argument…threats against the Court—much less threats buttressed by transparently obvious allegations of judicial corruption—will be extraordinarily rare."

Whitehouse et al.'s ad hominem attacks on Second Amendment advocates and on justices inclined to agree with them reflect a bipartisan tendency to impugn people's motives instead of addressing their arguments. It's a strategy that has no place in rational political debate, let alone constitutional law.