Sarah Silverman Has Been Canceled

The comedian and activist was fired from a film after a 2007 blackface photo emerged. 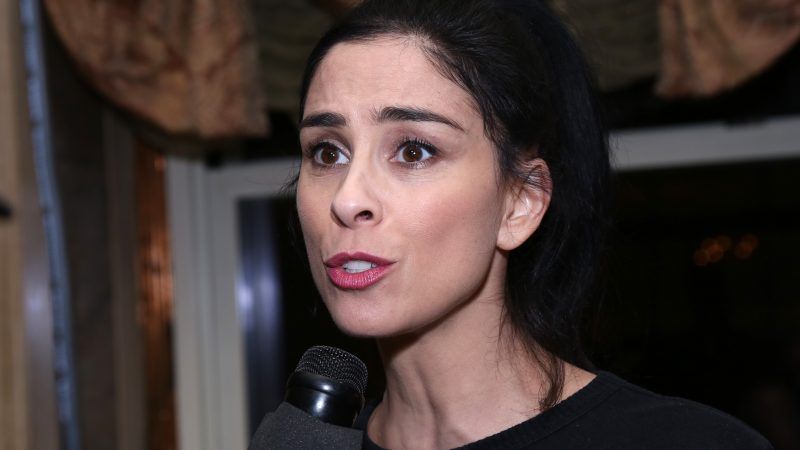 Sarah Silverman is canceled. The actress and comedian told Bill Simmons that she was recently fired from a movie after a picture surfaced from a 2007 episode of The Sarah Silverman Show in which she wore blackface.

Silverman acknowledges that it was wrong. The costuming choice was part of a sketch in which she and a scene partner sought to explore the complexities of racial identity by comedically probing whether or not it was harder to be black or Jewish. But it didn't sit well with her after the fact, and she said she will spend "the rest of [her] life" trying to make it right.

That wasn't good enough for the team on this new film. Silverman didn't elaborate on her firing other than to say she was kicked off the project the night before it was to begin. But she did have choice words for the emergence of cancel culture, calling it a "perversion"—one that is pushed primarily by the left and used by the right when convenient.

"It's like, if you're not on board, if you say the wrong thing, if you had a tweet once, everyone is, like, throwing the first stone," Silverman said. "It's really, 'Look how righteous I am and now I'm going to press refresh all day long to see how many likes I get in my righteousness.'"

And that righteousness, she says, leaves no room for growth. Instead of challenging people to be better, cancel culture boots people from polite society without the opportunity for explanation or redemption. Silverman, meanwhile, sees herself as someone who has changed with the times and thus deserves a second chance.

"There was so much I didn't know," she said. "I knew there was racism, I knew that there was and I wanted to illuminate that in some way in comedy. But I didn't know that cops were killing black people and unarmed black teenagers on the regular, and that changed me forever."

That Silverman has legitimately learned from her mistakes is most evident in the fact that it was Silverman who drew attention to it during an interview with GQ last year.

"I don't stand by the blackface sketch. I'm horrified by it, and I can't erase it. I can only be changed by it and move on," she told the magazine. "That was such liberal-bubble stuff, where I actually thought it was dealing with racism by using racism. I don't get joy in that anymore. It makes me feel yucky. All I can say is that I'm not that person anymore."

On Simmons' podcast, the actress also lamented right-wing figures who adopt cancel culture as a means to get revenge on the left. She mentioned that offensive comments from a comedy routine have been taken out of context by her foes as if she'd used them in a "press conference," and noted that the proceeding outrage inspired a Florida pastor to call for her death.

An outspoken organizer and activist for left-leaning causes, Silverman is perhaps an unlikely victim of cancel culture. She has consistently tried to rally civic engagement around Democratic politicians, particularly as one of Sen. Bernie Sanders' (I–Vt.) more high-profile supporters during the 2016 presidential election. But Silverman's recent brush with righteous intolerance is a reminder that the mob does not discriminate. One strike, and you're out.