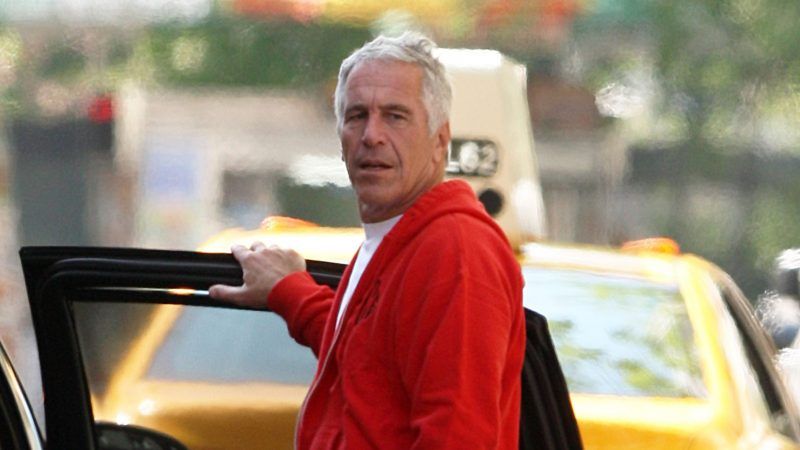 Alleged pedophile and child sex trafficker Jeffrey Epstein died Saturday of an apparent suicide in a Manhattan jail. News of his death was met almost immediately with wild speculation that he was the victim of a plot meant to stop him from ratting out high-profile friends who might have been implicated in his sex trafficking operation. Yet Epstein's demise is probably the result of jailhouse incompetence rather than conspiracy.

Epstein was arrested last month on charges of trafficking dozens of minors for sex between 2002 and 2005. He'd previously pleaded guilty to soliciting sex with a minor in 2008, but federal prosecutors did not pursue a larger case against Epstein at that time—a decision made by former Trump Labor Secretary Alexander Acosta, who had handled the case as a South Florida federal prosecutor in 2008 and who resigned last month after the new charges against Epstein surfaced. After his latest arrest, Epstein was being held at the Manhattan Metropolitan Correctional Center.

Conspiracy theories have run wild in the days since Epstein's death in large part because the 66-year-old financier had long-running friendships with both Bill Clinton and Donald Trump. Partisans on both sides had high hopes that one or the other would be implicated as participants in Epstein's crimes if a trial was held. In the immediate aftermath of Epstein's demise, Twitter lit up with claims that he'd been offed by a Trump goon or Clintonian hit squad—with the president himself helping to promote the latter theory. If you're going to believe something like that, why not go big and assume the once-friendly Trump and Clinton clans worked together?

The reality of Epstein's death is likely to be much more mundane—though likely preventable. Despite earlier reports that Epstein had been on "suicide watch" at the time of his death, officials now say Epstein had been taken off round-the-clock observation more than a week ago. Epstein had been put under suicide watch after a July 23 incident that left him unresponsive in his cell, though it was unclear whether he'd tried to kill himself or been attacked by someone else. Instead, he was left alone in a single jail cell in a part of the prison where guards were supposed to check on prisoners every 30 minutes—something that apparently did not happen early Saturday morning when Epstein killed himself, according to The Washington Post.

The union representing prison guards at the Manhattan facility is already on the defensive, claiming that staffing cuts and forced overtime have left the prison's staff unable to supervise all inmates all the time. Another suspicious detail is the fact that video cameras in the part of the prison where Epstein was housed were inoperable on the night he died.

None of that should be taken as proof of a conspiracy, but the conditions in the prison and the circumstances surrounding Epstein's death demand further investigation. Not because it might implicate Trump or the Clintons, but because if the people running Manhattan's prison are always this bad at their jobs, prisoners far less objectionable than Epstein are at risk of suicide.

Scandalous. I supervised jail suicide investigations at DOJ. Experts will tell you that it's essentially always true that jail inmate suicides are preventable, so when one happens it represents a *major* failure on the part of the jail. https://t.co/U3qRUxI2Vq

Hong Kong protests turn violent; airport shut down. Sunday was the most violent day yet in more than two months of pro-democracy protests in Hong Kong. Police reportedly fired tear gas and rubber bullets directly at protesters in a packed subway station.

HK Riot Police fired bullet and headshot a young lady. I am not sure whether her right eye will turn blind or not but it is totally insane and terrible. US should not export tear gas and rubber bullet to HK Police anymore. pic.twitter.com/R9gZKZysaO

On Monday, thousands of protesters again packed the main terminal of Hong Kong's international airport, forcing the cancellation of all flights, and raising fears that police may try to forcefully displace the protests. The airport handles more than 1,100 commercial and cargo flights every day, according to CNN, so the shutdown may cause additional problems with flights throughout Asia.

As the situation in Hong Kong intensifies and China threatens to intervene, it becomes increasingly clear that the U.S. should accept individuals forced to flee the city.

Speaking of immigration. Let's make it clear that if it becomes necessary for them to flee we will accept any Hong Kong protesters. pic.twitter.com/EY35x1nOms

Elizabeth Warren admits that raising taxes will hurt businesses. Now let's see if she will apply that lesson more broadly, or if she assumes it only works on businesses she doesn't like.

Increasing taxes on gun manufacturers will reduce gun and ammunition sales and bring in new federal revenue that we can use for both gun violence prevention and enforcement of existing gun laws. Together, we can hold gun manufacturers accountable.https://t.co/BsL6FMkgh0