As Beijing develops a high-tech police state, Hongkongers develop ways to resist it. 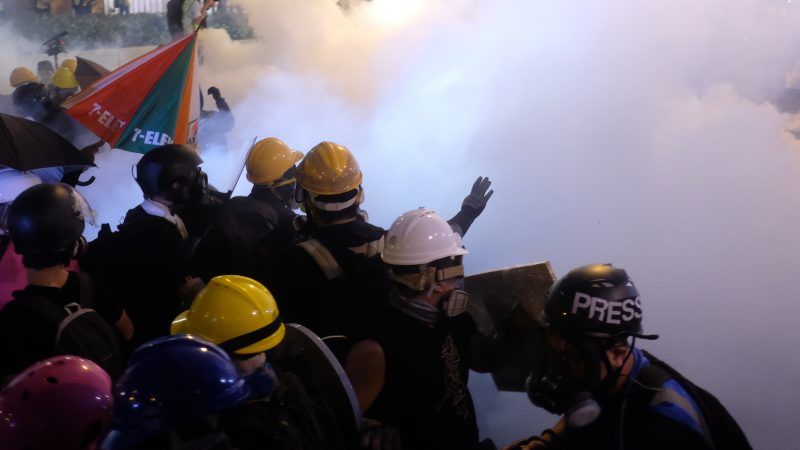 Protesters in Hong Kong began a three-day occupation of the city's Chek Lap Kok airport's arrivals hall today. The Chinese city is now nearing its tenth consecutive week of protests, with enraged Hongkongers engaging in various forms of civil disobedience since their legislature introduced a bill which would have allowed both Taiwan and mainland China to extradite people from the city.

This isn't the first time Hongkongers have mobilized en masse to protest the mainland's influence. Significant protests took place in 2003 and 2014, along the same themes—protesting encroachment on Hong Kong's autonomy and the potential erosions of the city's civil liberties. But this current rebellion has reached an intensity unmatched by its predecessors.

Hong Kong was a British colony until 1997, when London gave it back to Beijing. Though it is formally a part of China, it is considered a semi-autonomous region under the "one country, two systems" policy, which allows Hongkongers rights similar to those protected by our First Amendment. It also gives them the right to elect legislators—though not the chief executive, who is picked by a committee and approved by the mainland government. The "one country, two systems" deal is set to expire in 2047, and Hong Kong is supposed to fully become a part of China. Measures like the extradition bill have some Hongkongers worried that they're heading for a premature absorption.

Over the past few months, protesters have refined their tactics in inventive and effective ways:

Street protesters have found cunning ways to avoid police surveillance. By using umbrellas to shield identifying features from CCTV cameras—and in some cases using lasers, to fully derail image-capturing abilities—they have kept themselves safer from retribution.

Protesters pouring into the HKU MTR station. Some call out "It's raining, put up your umbrellas!" to remind them to obscure CCTV cameras with umbrellas as they go in, some with big red-blue-white bags of supplies. pic.twitter.com/o9UocBZNEa

The protesters know to expect tear gas and have developed systems for dealing with tear gas shells. They place traffic cones over them, so the fumes can't disseminate too widely. Then people swoop in to pour water through the traffic cone holes, so shells can be snuffed out. Sometimes wet towels are applied directly when cones can't be located.

In case a shell can't be suppressed, protesters come prepared with masks and eye protection. This way tear gas can't catch them off guard, and protesters can keep going for longer.

Tear gas simply doesn't scare HK protesters any more. They have the protective gear & know-how to handle it. It's a sad state of affairs when a whole generation of HK youth are experts on the various models of @3M masks & respirators… ("Is that a 6800? Nice!") https://t.co/ide9lrSnHn

Communicating with Each Other

Hongkongers have taken to using hand signals to spread word amidst the chaos, making it easier to distribute such gear as helmets, scissors, and umbrellas. The hand signs are specific and easy to spot.

A VIDEO THREAD: How did HK protesters use hand signals & human chains to get supplies quickly to front lines on Monday? Here, they need more helmets at the front line at LegCo doors. What to do? The hand signal for "helmets" is passed from the front line through the crowd… pic.twitter.com/hKWDaohpvf

"One of the greatest risks of injury or death in a crowd arises from the dangers of a stampede," notes Antony Dapiran, a Hong Kong-based journalist writing in the New Statesman:

When police fire tear gas into tightly-packed crowds, or the rapid-response 'Raptor' police teams launch one of their lightning baton charges, the risk of the crowd panicking—and a stampede forming—is acute.  Aware of these risks, crowds of protesters chant 'One, Two, One Two…' in unison as they retreat, and march in time to the count. This ensures the retreat is orderly and avoids what could otherwise become a deadly crush.

Communicating with Everyone Else

Protesting in the airport makes sense from an optics standpoint. It means it's easier for foreign visitors to capture footage of protests—and of any repression of the protests that might happen too.

In an effort to explain what's happening in #HongKong for an int'l audience, protesters have designed leaflets and posters explaining the #antiELAB movement in different languages. pic.twitter.com/97JUPUmmyz

It's also an opportunity for protesters to educate outsiders on the Hongkongers' struggle. From pamphlets and signs written in multiple foreign languages to creative boarding passes with inspirational slogans on them, protesters are working hard to inform travelers about their plight.

"Stand with #HongKong" Protesters have designed various posters and placards on the #AntiELAB movement for international visitors in English. pic.twitter.com/9RtvSyaQ5j

As authoritarian governments learn from China's ever more refined and encroaching systems of surveillance, censorship, and repression, Hongkongers are showing us ways the state's methods can be smartly defied. The rest of us can learn a thing or two from their techniques.