A global culinary capital considers surrendering to the nanny state. 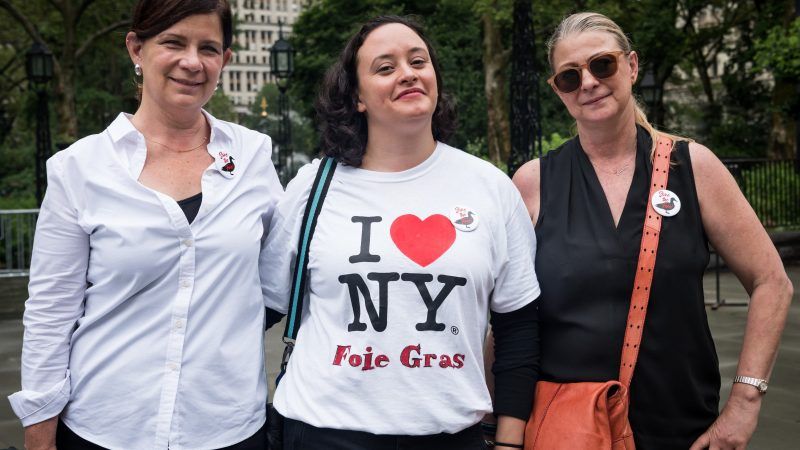 Opponents of the foie gras ban on their way to a New York City Council hearing in June. (Gabriele Holtermann-Gorden/Pacific Press/Newscom)

New York City, always in the running for the title of Earth's culinary capital, appears set to relinquish its claim by banning foie gras.

"No person, or any agent thereof, shall sell or offer for sale, or in any foodservice establishment provide or offer to provide by sale or any other manner, any force-fed product," Rivera's killjoy bill orders. Violators could face steep fines and up to a year in jail for violating the ban.

Rivera told the New York Post in February that she introduced the proposed ban because, the paper reports, "the foie gras production process is 'egregious' and has been wrongly 'tolerated' for 'far too long' in the Big Apple." Rivera told the Post last month that foie gas is "a luxury product that we don't need in New York City."

Unfortunately, many of Rivera's colleagues on the city council appear to agree with her. Crain's last month reported at least twenty of New York City's 51 city councilors have signed on to co-sponsor the ban. That number now stands at 28, which would give the ban the majority it needs to become law.

A city council committee debated the bill last month. There's no word yet on when—or even if—the full council will vote on the ban. Meanwhile, the Post reported last month that neither New York City Mayor (and soon-to-be-former presidential candidate) Bill de Blasio nor City Council President Corey Johnson has taken a stand on the proposed ban.

"We're both opposed to the ban," said Arjuna Bull, who plans to open a restaurant in New York City's East Village this summer with fellow chef Nahid Ahmed. "It's quite an exquisite ingredient. We love to eat it, we love to work with it. It's so versatile. All the chefs we know are opposed to [the ban]."

Last decade, Chicago lawmakers passed a foolhardy and short-lived foie gras ban. California's statewide foie gras ban, which is the subject of a court challenge in which I've played a role, took effect in 2012.

The loss of foie gras in New York City, coupled with California's ban, would make it illegal to sell foie gras in—depending on the source of your rankings—anywhere from four of the top 10 to six of the top 15 food destinations in America.

That's likely by design. Killing off foie gras in America begins and ends with banning it in California and New York.

A foie gras ban would have been inconceivable to many in New York even a decade ago.

Eleven years ago, I attended the "Duckathlon," a strange and wonderful competition for chefs that took place in and around Chelsea Market in lower Manhattan. The raucous event—held a short walk from Rivera's Manhattan district—was sponsored by D'Artagnan, the country's top purveyor of foie gras.

In a subsequent piece for Reason, I discussed how New York City's unique place in America's culinary hierarchy was increasingly in jeopardy. "There is probably no better place in America to hold an event celebrating and defending haute cuisine—and the chefs who cook it—than in New York City," I wrote. But I also noted that the city that's home to many of the best restaurants in the country had also become a burgeoning food nanny state.

Others I spoke with at the Duckathlon disagreed with that assessment—at least as it pertained to haute cuisine.

"I don't think, in its upper reaches, New York City is a food nanny state at all," the late food writer Josh Ozersky told me. Ozersky, like foie gras' greatest American promoter and defender, fellow New Yorker Anthony Bourdain, is dead. Their energy and leadership are sorely missed today.

I spoke this week with staffers (and even a customer, a foie gras-loving comedy actor from Los Angeles) at one restaurant that serves foie gras and is located in Councilor Rivera's district. They told me they were entirely unaware of both Rivera and her proposed ban.

That's worrisome. Unless opposition to the ban crystallizes and chefs unite to push back against it, foie gras could soon be no more in New York City. But the impact of these bans extends far beyond foie gras—a point I made here last year.

"Banning foie gras ducks would not only dramatically impact those producing it today, but logically could lead to banning all domestic poultry," D'Artagnan founder and CEO Ariane Daguin wrote in an email to me this week. "We believe there is risk of a much larger industry precedent being set here, one that ultimately could affect our daily meals."

The Wall Street Journal's Anne Kadet, who doesn't eat foie gras, toured the Hudson Valley Foie Gras farm in Upstate New York recently at the invitation of the farm's owners. The tour, she writes, didn't convince her to become a foie gras eater. Neither, though, did it make her a supporter of New York City's proposed ban.

"I'm personally opposed to the ban because it unfairly singles out a small segment of the meat/poultry industry that is an easy target," Kadet told me this week in an email.

Kadet's principled opposition to banning a food she doesn't eat is music to my ears. Hers is also a mindset I hope New York City lawmakers can both understand and embrace.