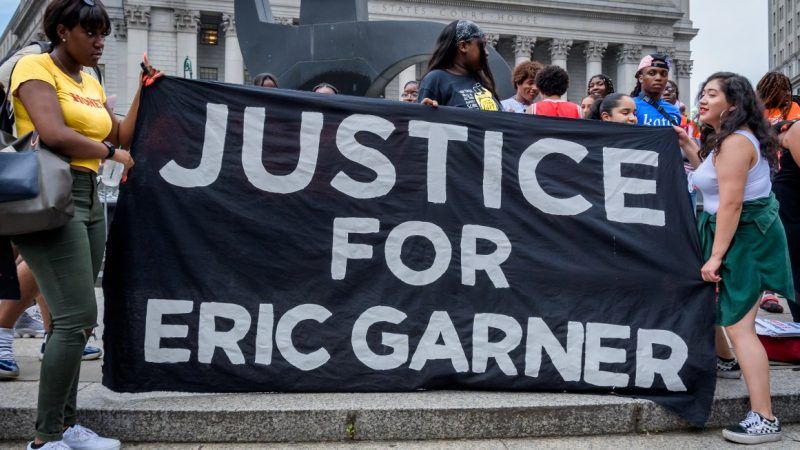 A judge has recommended that New York Police Department (NYPD) officer Daniel Pantaleo be fired for his role in the death of Eric Garner in 2014, a killing that was captured on cellphone video and provoked nationwide outrage.

Pantaleo was recorded confronting Garner, apparently suspecting that he was selling loose, untaxed black market cigarettes. Garner resisted when Pantaleo attempted to arrest him. Pantaleo put the man in a chokehold, and Garner ultimately died; an autopsy blamed the chokehold for his death. Garner's final words, a repetition of "I can't breathe," became a rallying cry for the Black Lives Matter movement.

A grand jury declined to indict Pantaleo for any crimes, and in July, five years later, the Justice Department announced it would not file civil rights charges against him. The city has been dragging its feet in determining what sort of discipline, if any, Pantaleo should face for his role in Garner's death. Protesters showed up at the Democratic primary debates earlier this week to heckle Mayor Bill de Blasio for failing to force Pantaleo out of the NYPD. (Pantaleo, meanwhile, has been on desk duty.)

Today, following an administrative hearing, NYPD Deputy Commissioner of Trials Rosemarie Maldonadoa—the judge presiding over Pantaleo's disciplinary trial—recommended that the officer be terminated. But this does not actually end Pantaleo's employment with the NYPD. The recommendation now goes to NYPD Commissioner James O'Neill, who will ultimately decide whether to fire Pantaleo.

While it's not impossible, it seems unlikely that O'Neill would decide to buck the judge and keep Pantaleo on the force. CNN reports from inside sources that O'Neill is expected to follow the recommendation. But New York state has laws that mandate official secrecy about police discipline and shield misconduct records from the eyes of the press and the public. If Pantaleo is fired, he could quietly be hired by another police department in New York or another state.

After the the announcement, Pantaleo was suspended for 30 days without pay, which is standard procedure when firing is recommended.