Josh Hawley: What Has Technology Done for Us Lately?

The senator leading an anti-tech crusade in Congress is being willfully ignorant of all the ways technology has improved humanity in recent decades. 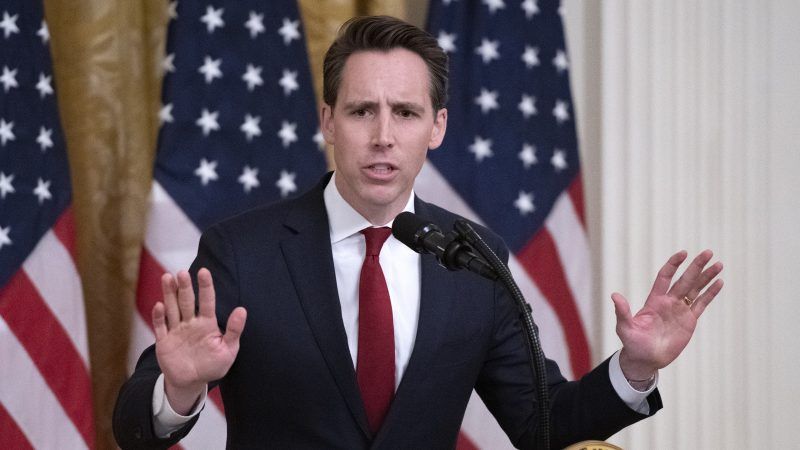 While speaking to a group of young conservatives on Wednesday, Sen. Josh Hawley (R–Mo.) made the bizarre claim that the biggest problem with technology today is the lack of innovation.

His "biggest critique of big tech," Howley said, "is: what big innovation have they really given us?"

"What is it now that in the last 15, 20 years that people who say they are the brightest minds in the country have given this country?" Hawley continued. "What are their great innovations?"

So here's me asking Josh Hawley about his stupid SMART Act in which he:

1) Didn't answer my question
2) Unironically said that social media wasn't an innovation
3) Said that we don't consent to them taking our data even though there's this thing called terms and conditions pic.twitter.com/JHZSeitPj0

Hawley should pick up the latest issue of Reason, half of which is devoted to the many ways in which the world is getting better. He'd be shocked to learn that a lot of those improvements are due to modern technological innovations. "We live in a world of reliable miracles," writes Reason Editor in Chief Katherine Mangu-Ward. It is a world where deaf people can be made to hear with the use of cochlear implants, where the nearly blind can have their vision restored by lasers, and where paraplegics have access to advanced prosthetics that let them walk.

Adrianne Haslet-Davis lost a leg in the Boston Marathon bombing, but now, thanks to technology, she can do this:

That prosthetic was designed by Massachusetts Institute of Technology biophysicist Hugh Herr, who also happens to be a double amputee. As Associate Editor Mike Riggs detailed in that same issue of Reason, Herr's latest project is a surgical procedure that will allow the brain to control robotic limbs as if they were part of your body. That's technology!

It's not just medical technology that's getting better and better, though that's obviously Hawley's biggest blindspot. Hawley wants to sneer at the vapidity of Snapchat "streaks" and fret over YouTube's "autoplay" feature, but he's ignoring the real ways in which social media companies are making the world a better place.

"Social media and Google and such things have revolutionized public discourse," says Price, who posted the video of the senator's speech and also questioned Hawley about the bill. "There's certainly ways to criticize specific actions of the companies without making the government our social media nanny."

"I think what this senator often forgets is that social media is not just a way for users to scroll through endless videos of puppies, or talk to friends about their last vacation," says Soderberg-Rivkin. "To claim that social media does more harm than good is a broad generalization that underestimates the power of users to harness technology to make a real difference."

That Hawley seems unable to grasp the value of such things is a good indication that he's the wrong guy to be leading a legislative crusade against technology.

But leading one he is. Earlier this week, Hawley introduced a bill that aims to regulate how Americans use social media. As Reason Features Editor Peter Suderman explained yesterday, Hawley's proposal would "outlaw such features as infinite scroll and Snapchat's 'streaks,' which encourage users to engage in unbroken communications with friends. The bill would additionally require social media companies to install time-use dashboards, and it would give the Federal Trade Commission and the Department of Health and Human Services the power to regulate other features in the future."

Hawley's bill is one of the first legislative ideas to emerge from a growing conservative backlash against modern technology—a backlash generated in part by Fox News' Tucker Carlson and others in the nascent "national conservatism" movement. They are all making the same mistake: dismissing the obvious benefits of technology while focusing solely on some of the unproductive trade-offs.

Recent technologies have helped countless Americans live longer, better, healthier, happier lives. And while scrolling through a never-ending Instagram feed might not be as valuable as the development of prosthetic limbs, both innovations add value to the human experience and should be free from government interference.

What has technology done for us lately? Just open your eyes.