A Federal Judge Has Put Trump's Anti-Asylum Rule on Ice 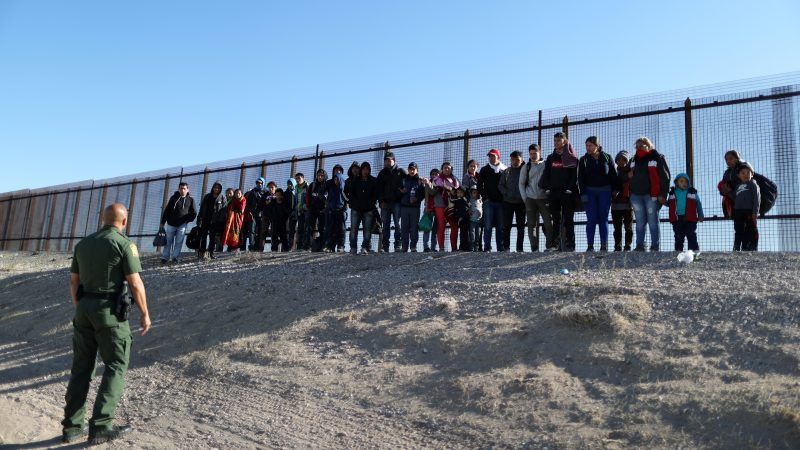 The Trump administration's plan to basically end America's asylum program as it exists was put on ice (no pun intended) after dueling court rulings yesterday. U.S. District Judge Timothy J. Kelly, a Trump appointee, refused to issue a preliminary injunction to block the administration from turning away any asylum seeker that arrived at the Southern border via another country without first applying for asylum in that country. Given that all these asylum seekers come by foot, after having traversed several countries, this would pretty much spell the doom of the asylum program.

Trump's success on this front would be a double blow for the kind of humane and pro-growth immigration policies that Reason has long advocated, given that there are also rumors the Trump administration is planning to end the refugee program next year. After slashing the refugee cap in half to 45,000 and then refusing to fill even that, it is now flirting with further slashing the cap to "zero." This has long been the fantasy and aspiration of White House aide Steve Miller, the ultra-restrictionist grandson of Jewish refugees.

It's unclear if there would be strong legal grounds to challenge the administration's prospective assault on the refugee program, but there clearly are grounds for challenge avilable to those hoping to use the asylum system. As I noted last week, under international and U.S. law:

[T]he administration is required to hear migrants' cases unless they are coming through countries with whom the U.S. has a Safe Third Country Agreement. Such a country has to offer a similar level of safety, security, and due process as the United States. The only country that currently has such an agreement with America is Canada. The agreement makes it incumbent upon Canada to consider the asylum petition of migrants on its soil rather than just letting them into the United States. Only if Canada denies their petition can they apply for asylum in America.

The administration is trying to strong-arm Mexico and Guatemala into signing similar agreements, which would require these countries to offer permanent asylum to migrants rather than merely temporarily warehousing them. But even if these countries agree, U.S. courts are unlikely to be convinced that the new rule is kosher. Why? Because these countries, particularly Guatemala, aren't "safe."

San Francisco U.S. District Court Judge Jon S. Tigar basically agreed with this and, literally within hours on the Kelly ruling, issued an injunction barring the administration from implementing its asylum ban.

The administration's argument was that the statute also gives it authority to implement additional "bars," or conditions on prospective asylum seekers. But that doesn't mean it can impose conditions that essentially overturn the will of Congress.

Given the split in the courts, this case will most likely fall in the Supreme Court's lap. It's unclear whether a ruling will come before the next election, but both sides' strategy is clear: Immigration advocates are trying to run out the clock on the Trump presidency. Meanwhile, the administration is trying to load the bases so that in case Trump gets re-elected and the Supreme Court rules in its favor, it can hit the ground running in his second term.

But this is not the only immigration-related case that raises the stakes in the next election. Scott Shackford wrote earlier this week about the new "expedited removal" rules that the administration implemented in the dead of night this week that allow immigration authorities to stop anyone anywhere in the country and demand to see their papers, not just in the 100-mile zone adjacent to the border as is (unfortunately) the case right now.

It's ostensive purpose is to deport undocumented immigrants who don't have long roots in the country. But it'll potentially affect everyone given that individuals don't come branded as "unauthorized" on their foreheads right now.

If you are stopped and can't prove that you've been in the country for two years, you would be subject to deportation. You will be entitled to no legal representation because immigration courts aren't required to provide any. Your only recourse would be to claim a "credible fear" that your life would be endangered in the country they were thinking of deporting you to. And if the arresting officer determines that you are not entitled to a hearing, then it's over for you. Basically, it means that an immigration agent would be judge, jury, and executioner all in one.

This will basically prod everyone—citizen and non-citizen—alike to carry their passports or birth certificates at all times to avoid the fate of Francisco Galicia, an American citizen who was just released from a detention camp pending deportation after three weeks without a shower or basic amenities. Indeed, even before this new rule for expanding expedited removals to anywhere in the country, due process for detention and deportation had been eroded so badly that about 1 percent of the inmates in immigration detention nationwide at any given time were citizens. In 2010 alone, over 4,000 U.S. citizens were detained or deported as aliens. Between 2003 and 2010, more than 20,000 Americans suffered the same fate.

Civil rights and immigration advocacy organizations tell me they are getting ready to sue this rule within the next few weeks.

Basically, they'll argue that the rule was issued without prior notice or a comment period and therefore improperly implemented. More importantly, they'll claim that there is no way to enforce this rule without some form of unconstitutional racial profiling to establish reasonable suspicion.

Sadly, given that Congress simply won't step in to rein in this president, the courts are the country's only recourse against his growing border lawlessness.