Robert Mueller Was Not Interested in Serving as the Democrats' Performing Monkey, and It Showed

If lawmakers want to impeach Trump they're going to have to deal with the politics of it all and not use the Justice Department as a shield. 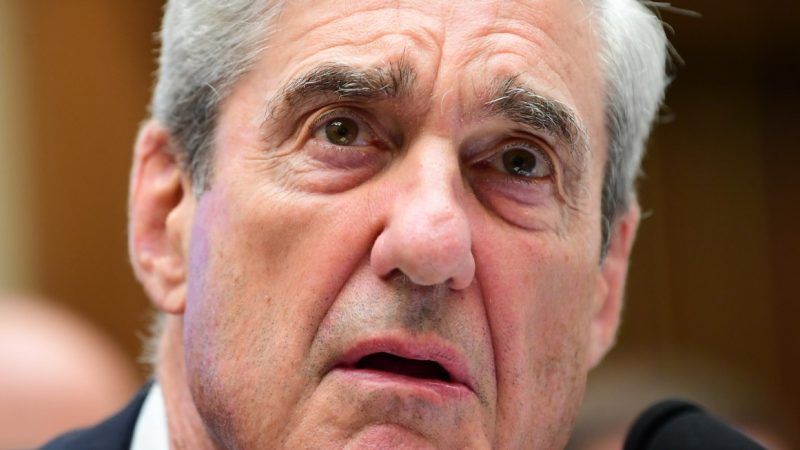 When Mueller stepped down as special counsel at the conclusion of his investigation over the extent of Russian meddling in the 2016 presidential election, he made two important points in a public statement. One, he wanted his report to speak for itself. Two, he did not want to testify about the report, and if he were forced to do so, his testimony would not extend beyond the report's contents.

Nevertheless, Mueller spent Wednesday testifying before members of Congress. The reviews are now in: He's boring! His energy level is low! He keeps asking them to repeat the questions because he's having a hard time hearing them! And he's not answering their questions the way they want!

Mueller ended up walking back what sounded like a bombshell at first: That he would have recommended obstruction charges against Trump if Trump were not president (he did not make a finding because Trump is the president, but he laid out the evidence for Congress to consider).

"Robert Mueller Is Struggling," is how Politico graded the 74-year-old's testimony today. There are, naturally, loads of tweets about Mueller's lackluster participation. Here's just one:

Questions are being raised on @CNN about Robert Mueller's performance so far. Friends and political allies who have known him for decades have expressed concern about his appearance today.

As one of many journalists who has watched this investigation play out, this is pretty much exactly what I was expecting. My interpretation of the disappointment today is that Democrats in Congress fervently hoped a compelling day of Mueller's testimony would make impeaching Trump seem both more feasible and less political.

Mueller has made it very, very clear in his comments and in his report that it is the role of Congress to decide what to do with the facts he has laid out to them. That means if Democrats want to impeach Trump, they can't use Mueller as a deus ex machina. They'll have to beat Trump in 2020 or impeach him on other grounds.

It's also not Mueller's job to remove politics from the process of impeachment. He's not there to protect either the Democrats or the Republicans from any political fallout that comes with removing a president from office (or, in the GOP's case, refusing to). His job was to provide Congress with the facts he found related to Russian involvement in the 2016 election and Trump's behavior surrounding his investigation. Congress has to decide what to do with those facts. While Mueller's report carefully lays out evidence that could be used to make the case that Trump attempted to obstruct the investigation, Mueller has made it clear that his responsibility, at least with regards to Trump, ended with gathering those facts.

I don't know what Mueller was thinking while he sat there, but it's easy to imagine how exhausting and tiresome it must have been to endure today's proceedings, likely knowing from the very start that the people questioning him were less interested in what he had to say—what he'd in fact already said—than in whether he'd say what they wanted him to say.