The Democratic presidential candidate is the latest example that occupational licensing is truly a bipartisan battle. 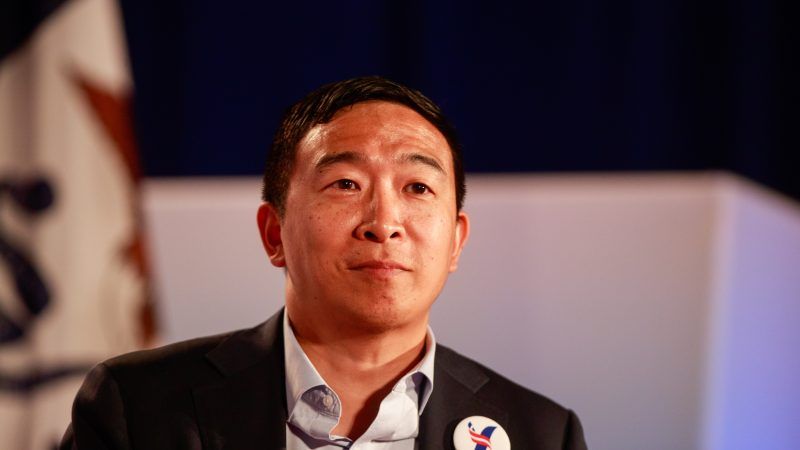 Bipartisanship may seem to be going out of style. But at least one issue continues to unite Republicans and Democrats: licensing reform. Democratic presidential candidate and venture capitalist Andrew Yang—who is running on a platform centered around a Universal Basic Income—has just released his plan to chip away at licensing requirements in an attempt to "get America moving again."

Mobility is an important source of economic dynamism, yet it is hampered in many parts of the country by onerous regulations. According to Garrett Watson, Special Projects Manager at the Tax Foundation, 22.2 percent of Americans moved in 1948. That fell to an all-time low in 2015-2016, when just 11.2 percent packed their bags for greener pastures.

Yang's plan endeavors to change that by helping lower-income individuals move to areas with better job prospects. Most notably, his proposal seeks to increase state-by-state recognition of occupational licenses, a practice that only three states—Arizona, Montana, and Pennsylvania—have adopted so far.

Licensing requirements often trap workers in the states in which they began their careers. Why? Because those licenses are not recognized out-of-state. If such workers want to relocate to a new state, and stay in the same profession, they will have to start the costly and burdensome licensing process all over again.

More than 33 percent of professions in the U.S. now require a license. "Nationwide, workers whose jobs require a state-issued license lose out on between $178 million and $711 million they could have earned by moving to a different state, according to a 2017 paper by Janna Johnson and Morris Kleiner, a pair of labor economists at the University of Minnesota," wrote Reason's Eric Boehm in April. "Johnson and Kleiner examined 22 professions that are licensed across most states, and they found that workers in those professions were, on average, 36 percent less likely to move across state lines than workers in non-licensed professions."

Yang also proposes a tax credit—capped at $1,000—for moving expenses. The tax code previously provided for an above-the-line deduction for similar claims, although that provision was eliminated by the Tax Cuts and Jobs Act of 2017.

Watson of the Tax Foundation says that Yang's proposed tax credit for moving expenses may well help energize the economy. But he cautions that it would need to be part of much bigger reforms.

"This would have to be one prong of many that would have to be advance to make a dent in things," Watson says. "Other items—reducing licensing burdens, reducing zoning laws that drive up the cost of housing—all these other non-tax issues would have to be part of a robust plan to move the needle here."